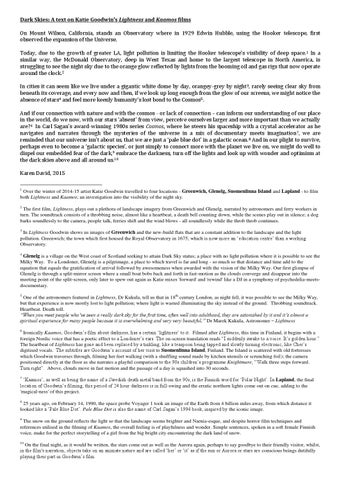 Dark Skies: A text on Katie Goodwin’s Lightness and Kaamos films On Mount Wilson, California, stands an Observatory where in 1929 Edwin Hubble, using the Hooker telescope, first observed the expansion of the Universe. Today, due to the growth of greater LA, light pollution is limiting the Hooker telescope’s visibility of deep space. 1 In a similar way, the McDonald Observatory, deep in West Texas and home to the largest telescope in North America, is struggling to see the night sky due to the orange glow reflected by lights from the booming oil and gas rigs that now operate around the clock.2 In cities it can seem like we live under a gigantic white dome by day, orangey-grey by night3, rarely seeing clear sky from beneath its coverage, and every now and then, if we look up long enough from the glow of our screens, we might notice the absence of stars4 and feel more keenly humanity’s lost bond to the Cosmos5. And if our connection with nature and with the cosmos - or lack of connection – can inform our understanding of our place in the world, do we now, with our stars ‘absent’ from view, perceive ourselves larger and more important than we actually are?6 In Carl Sagan’s award-winning 1980s series Cosmos, where he steers his spaceship with a crystal accelerator as he navigates and narrates through the mysteries of the universe in a mix of documentary meets imagination 7, we are reminded that our universe isn’t about us, that we are just a ‘pale blue dot’ in a galactic ocean. 8 And in our plight to survive, perhaps even to become a ‘galactic species’, or just simply to connect more with the planet we live on, we might do well to dispel our embedded fear of the dark,9 embrace the darkness, turn off the lights and look up with wonder and optimism at the dark skies above and all around us.10 Karen David, 2015 1

Over the winter of 2014-15 artist Katie Goodwin travelled to four locations - Greenwich, Glenelg, Suomenlinna Island and Lapland - to film both Lightness and Kaamos; an investigation into the visibility of the night sky. 2

The first film, Lightness, plays out a plethora of landscape imagery from Greenwich and Glenelg, narrated by astronomers and ferry workers in turn. The soundtrack consists of a throbbing noise, almost like a heartbeat, a death bell counting down, while the scenes play out in silence; a dog barks soundlessly to the camera, people talk, ferries shift and the wind blows - all soundlessly while the throb throb continues. 3

In Lightness Goodwin shows us images of Greenwich and the new-build flats that are a constant addition to the landscape and the light pollution. Greenwich; the town which first housed the Royal Observatory in 1675, which is now more an „education centre‟ than a working Observatory. 4

Glenelg is a village on the West coast of Scotland seeking to attain Dark Sky status; a place with no light pollution where it is possible to see the Milky Way. To a Londoner, Glenelg is a pilgrimage, a place to which travel is far and long - so much so that distance and time add to the equation that equals the gratification of arrival followed by awesomeness when awarded with the vision of the Milky Way. Our first glimpse of Glenelg is through a split-mirror screen where a small boat bobs back and forth in fast-motion as the clouds converge and disappear into the meeting point of the split-screen, only later to spew out again as Katie mixes &#39;forward&#39; and &#39;rewind&#39; like a DJ in a symphony of psychedelia-meetsdocumentary. 5

One of the astronomers featured in Lightness, Dr Kukula, tell us that in 18th century London, as night fell, it was possible to see the Milky Way, but that experience is now mostly lost to light pollution; where light is wasted illuminating the sky instead of the ground. Throbbing soundtrack. Heartbeat. Death toll. “When you meet people who’ve seen a really dark sky for the first time, often well into adulthood, they are astonished by it and it’s almost a spiritual experience for many people because it is overwhelming and very very beautiful.” Dr Marek Kukula, Astronomer – Lightness 6

Ironically Kaamos, Goodwin‟s film about darkness, has a certain „lightness‟ to it. Filmed after Lightness, this time in Finland, it begins with a foreign Nordic voice that has a poetic effect to a Londoner‟s ears. The on-screen translation reads “I suddenly awake to a voice. It‟s golden hour.” The heartbeat of Lightness has gone and been replaced by a tinkling; like a teaspoon being tapped and slowly turning electronic, like Cher‟s digitised vocals. The subtitles are Goodwin‟s account of her visit to Suomenlinna Island, Finland. The Island is scattered with old fortresses which Goodwin traverses through, filming her feet walking (with a shuffling sound made by kitchen utensils or scrunching foil); the camera positioned directly at the floor as she narrates a playful comparison to the 90s children‟s programme Knightmare; “Walk three steps forward. Turn right”. Above, clouds move in fast motion and the passage of a day is squashed into 30 seconds. 7

„Kaamos‟, as well as being the name of a Swedish death metal band from the 90s, is the Finnish word for „Polar Night‟. In Lapland, the final location of Goodwin‟s filming, this period of 24 hour darkness is in full-swing and the erratic northern lights come out on cue, adding to the &#39;magical-ness&#39; of this project. 8

25 years ago, on February 14, 1990, the space probe Voyager 1 took an image of the Earth from 4 billion miles away, from which distance it looked like a „Pale Blue Dot‟. Pale Blue Dot is also the name of Carl Sagan‟s 1994 book, inspired by the iconic image. 9

The snow on the ground reflects the light so that the landscape seems brighter and Narnia-esque, and despite horror film techniques and references utilised in the filming of Kaamos, the overall feeling is of playfulness and wonder. Simple sentences, spoken in a soft female Finnish voice, make for the perfect storytelling of a girl from the big bright city encountering the dark land of snow. 10

On the final night, as it would be written, the stars come out as well as the Aurora again, perhaps to say goodbye to their friendly visitor, whilst, in the film&#39;s narration, objects take on an animate nature and are called „her‟ or „it‟ as if the sun or Aurora or stars are conscious beings dutifully playing their part in Goodwin‟s film.