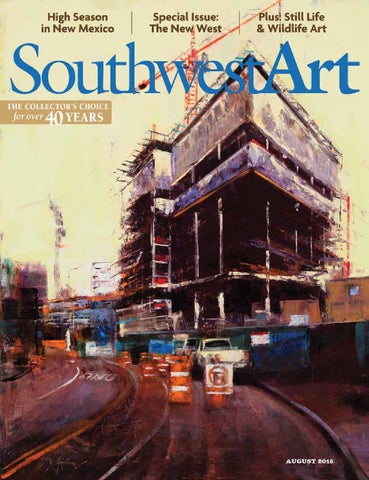 August is historically the busiest month for tourism in Jackson, WY, and nearby Yellowstone National Park. So Trailside Galleries, one of the city’s most venerable purveyors of western art, expects a big turnout of collectors and aficionados for the August 20 celebration of its monthlong show entitled A Western Convergence. The title itself might seem to suggest an episode from some classic cowboy serial, and that wouldn’t be too far off the mark. In fact, says Trailside managing partner Maryvonne Leshe, the name aims to convey multiple meanings. “It refers to the convergence of cultures that took place here in Jackson,” she says of the Indian tribes, explorers, mountain men, trappers, and cowboys who passed through the area, all following the geologic convergence of the Teton and Gros Ventre ranges and the

Snake and Gros Ventre rivers. “Each influence brought something different to Jackson,” Leshe continues, explaining the cultural vitality that to this day makes the place so dynamic. So it seemed highly fitting for Trailside to invite five distinctive and distinguished painters in various western genres to converge here, each bringing with him at least five new works. Bill Anton, known for his atmospheric yet detailed depictions of authentic ranching life, is participating. So is Jim C. Norton, who captures both historical and present-day scenes of Native Americans in a traditional style, and Logan Maxwell Hagege, who has gained acclaim for his graphic depictions of modern southwestern tribes. Tim Solliday contributes his images of Indians and cowboys in a style that recalls works by the Taos Society of Artists in the 1910s

and ’20s. Finally, Z.S. Liang brings his large-scale canvases of traditional tribal life, imbued with realistic detail born of the painstaking historical research he conducts. All the artists are present at the reception. “Showing all our works together like this will give them a strong impact,” says Liang, who’s particularly excited about his piece THE GUARDIAN OF THE BEAR SPEAR, an impressive 60-by-40inch oil depicting a medicine man from the Blood tribe of the Blackfoot Confederacy. Adds Hagege, who’s contributing four canvases of Indians and one of a cowboy on a bucking bronc, “I think seeing us all side by side will make for a very interesting show.” In fact, Leshe expects this convergence to create so much synergy that it generates not only intellectual curiosity but also very strong sales—resulting

in the decision that all of the paintings in the show be sold via a fixed-price draw. “Anyone who wants to purchase a work puts their name in a box for it, and we draw one name,” she explains. “It doesn’t matter whether you’re a billionaire or you counted your pennies. You have an equal, fair shot.” Like the show itself, that approach sounds perfectly in keeping with Jackson’s historic western spirit. —Norman Kolpas