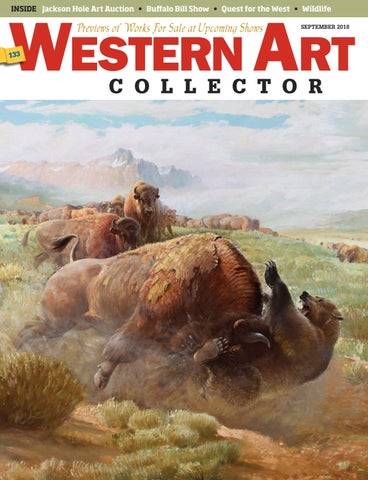 Witness from the past

t’s been 12 years since Morgan Weistling had a solo show. Not that he wasn’t active— demands for paintings at the Masters of the American West and Prix de West museum exhibitions kept him plenty busy—but now, at the fringes of his first solo show in a dozen years, the California painter is thrilled to have a unique storytelling opportunity knocking at his door. “A solo show offers a great opportunity to present a group of paintings that all go together. It’s a rare chance to do that,” Weistling says. “One painting can stand on its own, but it’s a different feeling when you can offer some insight on a group of paintings that are filled with new discoveries and new revelations.” The solo exhibition, A Brush With History, which shares its name with Weistling’s new book, will feature a dozen recent works, each of which looks back on pioneer and Western families from the mid-1800s. Weistling’s works

offer a glimpse into everyday Western life, particularly from a child’s point of view. “Time traveling with a brush, that’s what I’m doing with each new piece. These are paintings from my imagination, but they are guided by history, so if I could just jump in a DeLorean and go back 150 years or so I would. I’d take my palette with me and just paint what I could see, maybe hang around a one-room schoolhouse and watch the students and the teacher,” he says, adding that history guides his work, but he also draws heavily from live models, on-site painting and physical “sets” where his action is staged. “I will always swear this job is close to being a movie director, set designer, art director…I’m doing all these things and stuffing it all into one painting. Gathering the resources is fun because it pays off in the paintings.” For instance, in The Ducklings, Weistling had been quietly searching for someone with

ducklings for years. He finally found someone and immediately returned home with crates of borrowed ducklings. He turned his child models loose on the animals and let them play and see what came of it. The result is The Ducklings, in which three children are playing with nearly two dozen duckling in and around a wooden barrel. “An open door is an invitation to visitors, human or otherwise. I have had the pleasure for the past 20 years of being able to study the fascinating world of children through my paintings. When people get a phone call to bring their kids over for a painting they never know what strange and wonderful adventure it might be,” he says of the work. “In this case a bunch of baby ducklings were met with great enthusiasm. But at its core, as is with all my paintings, I am just as interested in the light I am going to capture in the story I am going to tell.” Light plays a significant role in all of the new

works, and it is how Weistling is pushing himself with each piece. In The Laundry Helpers, light is diffused and coming from front, which creates these soft shadows behind the two girls in the painting’s center. In The Law, overhead light creates dramatic shadows that cross a sheriff’s face, while Hope features brilliant and clear light that its young subject stares intently into. Weistling prefers to use live models, and often uses his own family as subjects,

something he did more frequently when his two daughters were younger—they are now 12 and 22 years old. “It’s difficult in this day and age of automation. People just grew up differently back then and it created character in them. I wish we could see more of that now. I have no inspiration whatsoever to paint my daughters looking at their phones… it will probably never happen,” he says. “But when they’re doing something real that’s where

I can really observe and appreciate what they’re doing. Back in the pioneer days, everything they did was real, whether it was making butter or candles or doing the laundry. That’s why I’m so happy to paint those scenes. They are about real people doing real things.” Fo r a d i re c t l i n k to t he ex h i b it i n g g a l l e r y g o to w w w. we ste r n a r tc o l l e c to r. co m

Morgan Weistling: A Brush with History - Showcase of New Works September 10 - September 23, Open House: September 15, 4-7pm Trailside Galleries, Jackson, Wyoming Trailside Galleries is pleased to announce Morgan Weistling; A Brush With History. The show is comprised of a select group of new works that complement the release of Weistling’s new book of the same title. The show is scheduled for Saturday, September 15 from 4:00-700 pm. Morgan Weistling will be available to meet with collectors and sign copies of his book. A two-time winner of the Prix de West purchase award, Weistling is renowned for his lush narratives of early American frontier life. With his skilled draftsmanship and use of light, he has been weaving stories that have captivated collectors for more than 20 years. A master storyteller, each painting is a narrative that draws in and engages the viewer and each relays Weistling’s own personal feelings about life, family, history and shared human experiences.