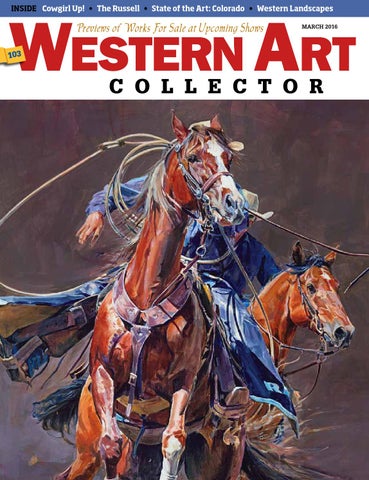 nited by their shared interest in Western scenery and history, painters S.C. Mummert and William Suys will be featured in new exhibitions beginning March 1 at Trailside Galleries in Jackson, Wyoming. A Simpler Time will feature Mummert’s new work, which derives its inspiration and historical context from the 1920s and 1930s, an era that saw an increased interest in all things cowboy, even as the Wild West faded further into the past amid a haze industrialization and invention. Mummert focuses especially on the women of the era. “This was a time in history when King Tut’s tomb was discovered, Lindberg flew the Atlantic, and Howard Hughes set the world land-air speed record,” he says. “The

cowgirls from that time really came into their own as well, many trading their skirts in for jodhpurs—some entering (and winning) rodeo competitions largely designed for men.” Mummert, who says he was greatly influenced by Howard Pyle and Will James, adds that the Old West became a novelty with dude ranches, which were advertised and promoted by the railroads to bring travelers west into a “time of adventure, style and design,” he adds. “In 1929, there was only one car for every five Americans, which seems so weird to me. People were still on horses and buggies and trains. So of course you would still see cowboys running around.” His works include the portrait Cevanna, featuring a female rider with hat in hand; Kiss

the Girl, with a cowgirl embracing her horse; Squeeze Play, a cowboy with his back to the viewer as he rides around several cattle; and Reflection, depicting a woman adjusting a boot against a vintage Ford. Suys will show his work in the exhibition Portraits From the Ranch, which will focus heavily on animal portraits, including the piece Lifting Fog featuring a profile of a Brahman cow in a field. “That was a great day for us,” Suys says. “We were out on this beautiful morning and the fog was settling in and lifting—it was just a glorious day, and just thinking about it takes me right back there to relive it.” In Okies, Suys paints another cow, this one with its head turned toward the viewer, a vital

acknowledgment that brings the audience into the picture and its bucolic scene. “I’m excited about the show because I’ve been doing portraits of animals and really enjoying it. I remember being on the road painting Holsteins and their very angular bodies. The more I observed them the more I started to see abstract themes in their shape,” Suys says. “I became enamored with the characters themselves—they became individuals and they came to life.” Fo r a d i re c t l i n k to t he e x h i b it i n g g a l l e r y g o to w w w. we ste r n a r tc o l l e c to r. c o m