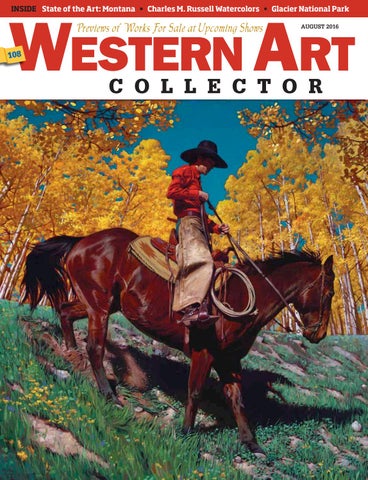 railside Galleries has been showcasing Western art for more than 50 years, working to preserve and interpret the heritage of the American West. In the upcoming show Spirit of the West the gallery looks to continue that trend with more than 25 gallery artists participating. The artwork will span from landscapes to wildlife, still lifes to scenes of action, and also depictions of cultures and people throughout the West. Both traditional and contemporary art will hang during the month of August. Among the 25 gallery artists will be William Acheff, Bill Anton, Stan Davis, Robert Duncan, John DeMott, Dan Mieduch, S.C. Mummert, Z.S. Liang, William Phillips, Alfredo Rodriguez, and Richard Thomas. In capturing the spirit of the West, each artist

had his own challenges and interpretations. For Thomas, the spirit of the West “in all its unique presence, cannot be denied, and must be experienced.” “The spirit of the West is not something that can be easily contained within the simple bounds of even the very best oratory,” he adds. “The thundering hooves of the warhorses over the plains of the Northwest is that spirit we artists so desperately try to convey, often falling short to the reality of its magnificence.” Thomas captures an American Indian

William Phillips, Counting the Newborns, oil on board, 24 x 18&quot;

engaging his horse rounding up a herd of horses in Warhorses on the Move, something that happened often, to Native Americans and cowboys alike. To Thomas this is a true experience of the West. “[The spirit of the West] is something you can only realize from the saddle of a horse, or through the branding iron to calf, or a rope overhead,” he says. “Witnessing Western sunsets, wrangling cowboys, snorting horses and bellowing calves, the cracking of fire and hot coffee, all resemble the spirit of the West.”

“I have loved the West and its open spaces all my life,” Phillips agrees. “Though I have done a great deal of work on the East Coast, my heart fills with joy on my Westward journey when the Rockies come into view.” The Blanket Gun by Liang depicts an experienced Blackfoot hunter in his red blanket capote with a bow case and quiver carried over his shoulders. He tucks a trade fur in his sash and the capote can be used to hide the gun. “The gun barrel is cut tshort enough to fire easily with one hand while on horseback hunting,” explains Liang. “This practice was common for the Plains Indian people in the 19th century.” Liang continues: “As an artist fascinated in the American Indian culture and history, I love to tell stories about them in my paintings. The blanket gun is unique and visually interesting; I have one in my own gun collection. It’s definitely a good painting idea.” In more recent times of the West, veterans of World War II came back with newfound skills they put to work in civilian life, something Phillips captures in Counting the Newborns. “Here we see a rancher who may have served flying through the flak-laden skies over

Europe, or flying the Hump in India,” he explains. “He now finds himself in much friendlier skies counting the newborns of his growing herd.” Spirit of the West will hang at Trailside Galleries in Jackson, Wyoming, from August