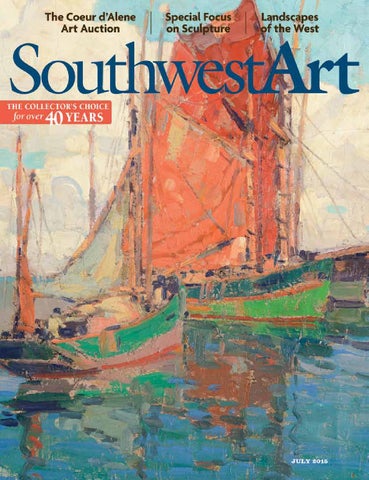 Masters in Miniature Trailside Galleries, July 1-31 As many collectors and art lovers know, miniatures shows can offer wonderful opportunities to purchase works by distinguished artists at reasonable prices. This month Trailside Galleries presents one such event—its fifth annual Masters in Miniature Invitational Exhibition and Sale, featuring a treasure trove of small gems by both gallery and guest artists. More than 200 of these works are sold by draw during an open house on Thursday, July 16, from 5 to 7 p.m. The show includes works in a variety of genres—figurative, landscape, seascape, floral, wildlife, and western. And artists featured in the show hail from across the country and beyond, including Jim Morgan, Dinah Worman, Calvin Liang, Mian Situ, Renso Tamse, John McCartin, and Lindsay Scott, among others. Many of the participants are members of prestigious national organizations, such as Oil Painters of America, Society of Animal Artists, Plein Air Painters of America, Cowboy Artists of

America, and National Sculpture Society. From cute cowboys to killer cats, the presentation has something for every taste. And every artist has unique wellsprings of inspiration. For example, Californian Alfredo Rodríguez is known for his realistic portrayals of the American West—mainly its inhabitants. Rodríguez says he found inspiration for THE LITTLE COWBOY, on view in the show, in a sweet-faced 3-year-old named Daniel. “He loves to wear his hat and cowboy boots all the time and dreams of becoming a real cowboy someday,” Rodríguez says. “His warm and charming personality inspired me.” By contrast, Washington artist Sueellen Ross is often inspired by the personalities and antics of the canine and feline set, which are not always sweetnatured. Her piece, SCORE!, portrays a ferocious feline with its latest prey torn to shreds. “All the fancy breeding in the world can’t take the killer instinct out of this Abyssinian kitten,” Ross says. “Her victim is a feather toy. She’s taken

it back to her lair to enjoy it at her leisure. Don’t even think about taking it away from her.” Airplanes are often the source of inspiration for Canadian painter Ross Buckland. In COFFEE’S READY, his submission to the show, he portrays a bygone time in aviation history, the romantic era of the bush pilot who flew amid the majesty and beauty of the wilderness. “It was a time before GPS and the cellphone, when

one depended on one’s skill, experience, and ingenuity to get the job done and to survive when those very qualities were tested,” Buckland says. “Competitive in business but loyal to his kind, the bush pilot has been and still remains an outstanding symbol of what has always been good in aviation.” In addition to realistic works like Buckland’s, there are also works in the

show that evoke impressionistic sensibilities, such as Ralph Oberg’s EIGHTEENTH CENTURY FRANCE. The Colorado artist, who is known for his wildlife and landscape works depicting the West, turns his attention to a European locale for this piece, capturing a scene with loose brush strokes and patches of color and light in the tradition of the French Impressionists. —Bonnie Gangelhoff