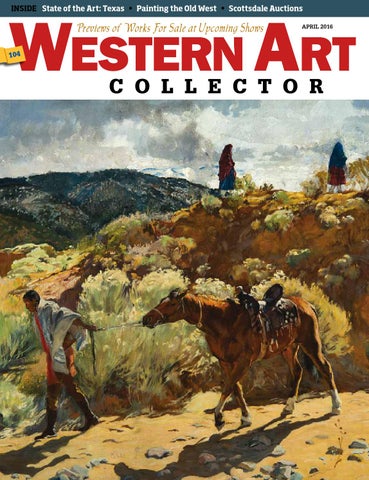 INSIDE State of the Art: Texas • Painting the Old West • Scottsdale Auctions APRIL 2016

haring one’s life and culture with viewers is a primary job of an artist. In Trailside Galleries’ annual show East Meets West, Chinese artists James Jiang, Mian Situ, and Jie Wei Zhou come together to showcase their traditional Chinese culture. “The East Meets West show strives to bring together a diverse group of Chinese artists who are united by a common passion for art and pride in our Asian heritages,” says Zhou. “Every

year I am inspired by the support that I have received from the art community and by the public’s enthusiasm for Chinese artwork. The East Meets West show is not only an opportunity for me to share my stories, but also a chance for me to connect the traditions that I came from with the cultures I am now immersed in.” In Jiang’s Enjoying a Cup of Tea, the artist celebrates Tibetan butter tea, one of China’s specialty drinks.

“Mosuo culture is traditionally a matriarchal society until more recently,” he explains of the culture drinking the milky liquid that has become a popular customary tea. “During the day, men and women are rarely alone with the opposite gender unless they are working together, which is where they are able to enjoy a cup of butter tea. In the evening, however, men and women are always dancing and singing together, which is where the signs of attraction are allowed.” In another work by Jiang, In the Evening, two elderly women sit as they get ready to knit, a commonly nightly practice. “The Wa people are farmers by day and knitters by night,” Jiang says. “Wa people are very hardworking, and after a long day working in the fields, they take on a second job

when they return home to knit the traditional costumes they wear.” From the more personal and intimate situation with the butter tea and traditional costumes of Jiang’s work, Zhou takes us to a more professional setting in Chinese Medicine Store, where he depicts a doctor feeling a patient’s pulse in an old pharmacy in San Francisco’s Chinatown in the early 19th century. “My inspiration for this painting stemmed from my own experience in visiting a doctor in China,” Zhou says. “A few minutes after feeling the pulse in my wrist, the doctor scribbled down a prescription. He didn’t ask me any questions and I hardly had the chance to explain my symptoms before he sent me off. I took the Chinese medicine for a couple of days and was surprised by how quickly I recovered.” Situ met the woman in Color of Tradition in a market in Cangyuan, Yunnan Province, in China. She is a Wa woman, and her people live near the Southwest border in China, and often spread into countries like Myanmar. “The women in the tribe love strong and bright colors for their costumes. They smoke tobacco pipe—I hear that one of the reasons is for keeping the mosquitoes away in the mountain area,” Situ says. “I am always attracted by their weathered faces with strong features.” East Meets West, from April 1 to 30, will showcase five to six new pieces each by Jiang, Situ, and Zhou.