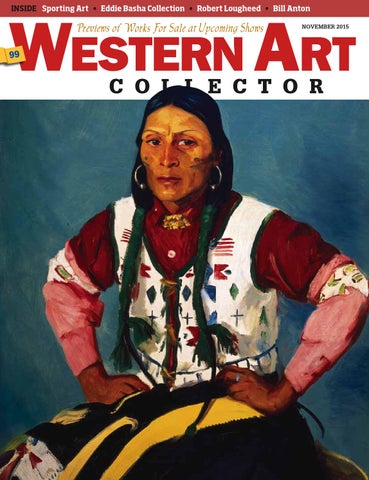 arrative snapshots, frozen in oil, acrylic and watercolor, will be the subject of a new group exhibition, Storytellers: Artists of the American West, at Trailside Galleries in Scottsdale, Arizona. The show will feature some of the gallery’s most popular and recognizable artists,

including Bill Anton, John DeMott, Ian Ramsay, Kathleen Dunphy, Morgan Weistling, Jenness Cortez, JoAnn Peralta, and others. New York painter Cortez says her works tell stories through the objects she paints into her elaborate and highly detailed arrangements of books, furniture, paintings and artifacts. In An

Autumn Romance, she frames a table topped with various items, including a Charles M. Russell bronze directly underneath a large moose painting by Carl Rungius. “I’m especially interested in the dramatic effects of light. The light from that little Zuni pot lamp is very important. It makes it a little bit romantic, which adds to the romance of the other elements, including the affection shown by the mating pair of moose and the bears in the Russell bronze,” she says. “I like to put elements like that together to tell a story… Storytellers, as the title of the show, is a good fit for me, because storytelling is what I’m doing. I’m trying to give viewers those subtle surprises, so if they look at my works they can flesh out an idea, theme or story.” Cortez’s still lifes and careful arrangement of artifacts will join Weistling’s narrative story paintings on Trailside’s walls. A highlight from his selections is The Needlepoint Artist, which depicts a young girl, surrounded by flowers, working with needle and thread. “I suppose I am best known as a narrative artist. I have always told a story in my paintings

that goes beyond the frame of my canvas. I think that is what storytelling really is at its core in painting. I like to suggest, sometimes with a light touch and other times with a heavy hand, that the people I am painting were real and have a reason for what they are doing,” Weistling says. “In The Needlepoint Artist, you have a girl, set in late 1800s clothing, working on her needlepoint—something common before iPads. I decided to combine the idea of needlepoint art with the idea that she likes to observe nature firsthand, like a still life painter, for her creations. Surrounded by her flowers, she is using them for her inspiration. She is like a character in a good book, a bit of a maverick to do such a thing, rather than work from a pattern. And she likes working

outdoors, rather than in a stuffy, dark room. A hundred years after her death, her famous tapestries will be seen on Antiques Roadshow and be worth thousands of dollars. So, yeah, I like to tell stories.” The storytelling exhibition will also feature a special showcase within the show, Spanish Romanticism — The Fine Art of JoAnn Peralta. California-based Peralta, who is married to Weistling, is widely known for her careful portraits of female subjects spanning a variety of time periods. Her new works will all feature Spanish models to punctuate Peralta’s own heritage, which has roots in Spain and Italy via Mexico. “I want to really examine the lives of Spanish immigrants, their beauty and their

culture, the history and the contemporary effects,” she says. “You can’t go anywhere in America without seeing some kind of Spanish or Mexican influence. I just want to capture all that beauty.” In Midnight Dreams, Peralta was inspired by one of her own daydreams, one that inspired her to make a trip to a nearby fabric store to find the many different materials used for her subject to lay in. “I wanted it to be a surrealist moment where she’s floating in a dreamlike state,” Peralta says. “She is experiencing life and love, and just enjoying the moment.” Fo r a d i re c t l i n k to t he e x h i b it i n g g a l l e r y g o to w w w. we ste r n a r tc o l l e c to r. c o m