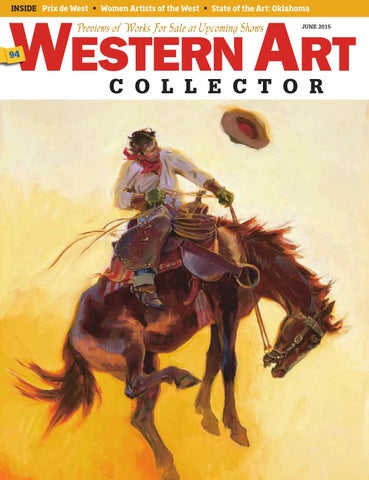 INSIDE Prix de West • Women Artists of the West • State of the Art: Oklahoma JUNE 2015

William Suys’ As the Sun Sets in the West represents “the grace, beauty and rhythm” of the longhorn. The artist wanted to “create a feeling of life within the beast, and space

around it.” As a child, Suys saw a painting by Walter Ufer, one of the original Taos painters, that continues to inspire him today. “I was struck by the light—an example specific to Taos, and very different than what we experience in the Midwest,” explains Suys. “I came to the immediate understanding that light can take on a distinctly different feel than I was used to, and in As the Sun Sets in the West, I was keen to re-create the type of sunset I’ve enjoyed so many times in the Southwest.” Painting for as long as she can remember, Sueellen Ross is encouraged to paint what she loves, which is domestic cats, dogs and wild birds. Ross’ painting for the show showcases her love for the latter. “My challenge with Extreme Fishing was to create as much contrast as possible between the turbulent water and the motionless blackcrowned night heron,” explains Ross. “At first glance, a mossy, slippery rock in the middle of shallow rapids doesn’t look like a promising fishing spot. But this bird had a very good day Ian Ramsay, Baranof Island, Alaska, watercolor, 20 x 28

indeed, moving nothing but his eyes, then darting down to pick up the fish that slipped downstream, right in front of his rock.” Prior to becoming a full-time artist, Ian Ramsay was an architect, which influences many of his paintings, including a market square scene from Capestrano, Abruzzo, Italy. Another painting shows his architectural background as the viewer looks at Baranof Island, Alaska, a busy Alaskan harbor. “I was inspired by the hugeness of the scene at the harbor on Baranof Island,” says Ramsay. “It was Alaska—ships, mountains and huge pine forests. Very little inspires me more than a working harbor. Alaskan harbors are always amongst the most enjoyable to paint.” High Country Summer runs June 1 through June 30, with an artist open house June 18 from 5 to 7 p.m.