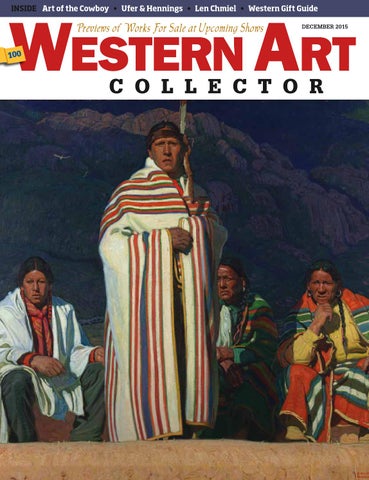 railside Galleries is hosting its annual holiday miniatures show Deck the Walls beginning December 1 in Jackson, Wyoming. The show will feature works from all of the gallery’s artists, including Bill Anton, Jeremy Browne, Shawn Cameron, Bruce Cheever, Jenness Cortez, Brent Cotton, Z.S. Liang, Ian Ramsay, Tim Solliday, Matt Smith, Dustin Van Wechel, Curt Walters, Morgan Weistling, Jie Wei Zhou, and many others. Mian Situ will have at least two new works in the show, including A Curious Mind, which depicts a small child with a yellow wreath on her head. “I met this cute girl in Lijiang, a small town in Yunnan Province in southwest China,” Situ says. “The small town is one of the most

favorite chosen places for young people to spend their vacation.” In The Pose, Situ composes a female figure in profile, a long ornate pipe hanging from her mouth and her hair tied up in a red scarf. “This is a Wa lady. Wa people live in the border area between China and Myanmar. They dress in their own costumes and prefer very bright colors,” the artist says. “The Wa women like to carry their pipes wherever they go. One of the reasons they smoke, I learned, is to keep the mosquitos away.” In Ross Buckland’s They’re Okay, the prominent aviation and adventure painter shows a search and rescue plane making a welcome discovery from the air.

“Much of my work is inspired by the stories and lore of the early bush pilots whose exploits of daring and ingenuity helped to open the vast and unforgiving Northwest,” Buckland says. “Routinely flying great distances over uncharted wilderness to deliver food, medicine and fortune seekers, they were often called upon in emergencies. Search and rescue was not uncommon.” Deck the Walls hangs through December 13 in Jackson Hole. A reception and open house will be held December 12, from 2 to 6 p.m.