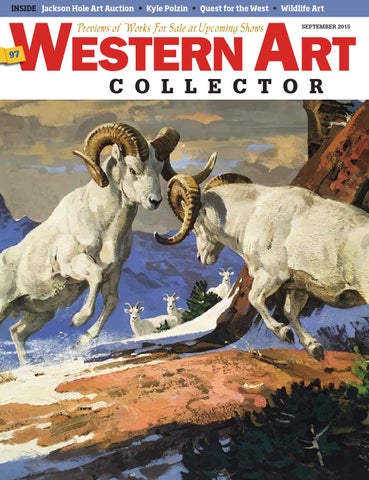 ach year the city of Jackson, Wyoming, hosts it Jackson Hole Fall Arts Festival, with a number of art-related events that attract both locals and visitors. Among these happenings are mainstay gallery exhibitions, such as Trailside Galleries’ Fall Gold Exhibition and Sale, taking place in 2015 from September 7 to 20. The annual gallery show features wildlife, landscape and sporting art by some of the leading artists in those genres: Brent Cotton, James Morgan, George Northup, Daniel Smith, Adam Smith, John DeMott, Tucker Smith, Kent Ullberg, Sarah Woods, Lindsay Scott, Jan Martin McGuire, and Ezra Tucker, among others. One of the paintings on view in Fall Gold will be McGuire’s Golden Hour, featuring a zebra in the African wild. “My husband, who is a nature photographer, and I travel to Africa almost every year. It is a magical place—the sounds, smells, exotic animals and the light. The light always draws me and is a source of inspiration in all my work, but the light in Africa has a special ‘glow’ to it,” says McGuire. “I took many photos of a herd of zebra we encountered at dawn. The beauty of the gold-ish pink light on the black-and-white zebra was incredible and I knew then that I had to paint it. Once painted, I was struggling with

a title, when it came to me: Golden Hour. This is what photographers call the time right after sunrise and right before sundown, when the light is at its richest.” Scott’s painting for the exhibition, titled Waiting, depicts a leopard perched atop a branch. “In the early evening the leopard waits on a shaded branch of the sausage tree for an

opportunity to present itself,” she says. “I chose colored pencil to depict this scene as I felt it would best capture the wonderful contrast in textures of the leopard and the tree and the soft evening light” In addition to the Fall Gold show, the gallery will host two solo showcases: Their World: Kyle Sims and Dutch wildlife artist Renso Tamse’s From the Wild. Tamse, who works in watercolors, will highlight animal species from around the world in his exhibition. Featured will be African elephants, Siberian tigers and a selection of North American mammals. The gallery explains, “In the composition of his paintings, accurate draftsmanship is paramount in the representation of the animals, coupled with infusing the work with life and soul.” Included in the show will be Moonlight Grace, a painting of a trumpeter swan. “The Jan Martin McGuire, Golden Hour, acrylic on canvas, 22 x 36&quot;

trumpeter swan is the heaviest living bird native to North America, with a wingspan that may exceed 10 feet,” says Tamse. He was inspired by the swan “moonlit on rippled night’s water, graceful in movement. The stillness replaced by the soft whistles of white wings.” Another of his works is African Dust, featuring the African elephant in the Namib Desert. “I really wanted to show the dryness and dust of such a place,” explains the artist. “When you see dust clouds move, there suddenly is a big bull just behind one of the many dead trees in the Namib Desert.” All three shows will feature an open house on September 19 from 5 to 7 p.m. Fo r a d i re c t l i n k to t he e x h i b it i n g g a l l e r y g o to w w w. we ste r n a r tc o l l e c to r. c o m