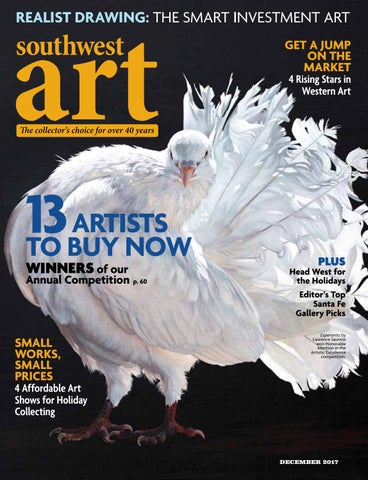 REALIST DRAWING: THE SMART INVESTMENT ART GET A JUMP ON THE MARKET 4 Rising Stars in Western Art

artists 13 to buy now winners of our

About 17 years ago, when he was just embarking on his fine-art career, Jeremy Winborg had the opportunity to meet a successful East Coast gallery owner. The gallery owner asked the then-21-year-old what kinds of paintings he preferred to create. “I do a lot of different things,” Winborg recalls answering, “but I love to paint portraits and figurative works.” “Nobody wants those,” the man replied matter-of-factly. “Don’t paint them.”  Ready to Play, oil, 36 x 24.

Taking that advice to heart, Winborg launched into a successful career that concentrated almost exclusively on landscapes, cityscapes, seascapes, and harbor scenes, all subjects he still enjoys portraying from time to time. And though he “always had the desire to paint people,” he mostly steered clear of the human form. Then, one day almost 10 years ago, he was inspired to paint his then-3-yearold niece Layla, whose mother is Navajo. He borrowed an authentic child’s elk-skin dress from a couple who collect

American Indian artifacts and live not far from him in Utah’s Cache Valley, about 90 miles north of Salt Lake City. And he photographed the girl in the dress as reference material. “I’ve always loved Native American culture,” he explains simply. The resulting images led to the first of many oil portraits Winborg has since completed of his niece—who is now 13 and still a favorite model—along with an extensive body of work featuring many other authentically clad tribal people he has encountered in his daily life and his

travels throughout the West. Gradually, such works have transformed his career, winning him his first major representation from the widely respected Trailside Galleries along with acceptance into two prestigious annual events for western art collectors: The Russell Exhibition and Sale and the Jackson Hole Art Auction. “Now I’m painting what I want to paint, what I love to paint,” Winborg says, summing up what he has learned about following his heart rather than someone else’s opinion. “It makes me

happy, and I’m enjoying more success than I ever have before.”

Winborg always felt destined to become an artist. His father, Larry, worked as a highly successful illustrator, with regular clients that included Reader’s Digest, Sports Illustrated, and Scholastic Books. Jeremy’s earliest memories include hanging out in the basement studio of their home in a suburb north of Salt Lake as his father completed his commissions. “One time when I was 2 or 3 years old, I remember he was working

on an assignment called ‘Inside the Big Top,’ with elephants balancing on balls, and he let me put a few brush strokes on the painting. He probably had to fix those brush strokes later, but that moment was pretty impactful for me.” Throughout his school years, the young Winborg himself “was known as the artist” among his classmates. At Sky View High School in the Cache Valley town of Smithfield, UT, where his family moved when he was 15, that reputation blossomed into his first major achievement. His painting of the U.S. Capitol Building in Washington, DC, won top honors at the annual Utah All-State High School Art Show at the Springville Museum of Art and was then distributed as a poster displayed in classrooms across the state. “That gave my confidence a good jumpstart,” he says modestly. Following a two-year mission in Albania for the Mormon church, Jeremy enrolled as an art major at Utah State University, just 10 minutes from his family home. Feeling confident in his artistic skills, with galleries in Park City and St. George already selling his works, he complemented his deliberately limited studio studies with as many art-history classes as he could fit into his schedule. “I wanted to learn from masters of the past,” he says, citing inspirations as diverse as Norman Rockwell; Impressionists including Claude Monet, Paul Cézanne, and Alfred Sisley; 19th-century American artists including Albert Bierstadt, Thomas Moran, Winslow Homer, and John Singer Sargent; and western greats from C.M. Russell to Frank Tenney Johnson to Howard Terpning. His passion for artists of the past is even reflected in his children’s names: The three oldest girls have the middle names Monet, Cézanne, and Sisley; the boy is named Conrad after the middle name shared by Winborg and his father; and his 1-yearold daughter’s first name is Winslow. While a student, Winborg met, dated, and then married Danielle, with whom he’s celebrating their 16th wedding anniversary this month. Early on, Winborg’s full-time job in a local bike shop helped make ends meet but left precious little time for his studies and painting. So finally, about a year into married life, he “made the jump with both feet” from

part-time to full-time artist. He sold many of his works through a gallery his parents had opened in downtown Logan after his father transitioned out of illustration and into fine art himself. “That kept me really busy,” he says, “and I had no trouble building a house for my family, putting food on the table, and paying my bills every month.” Gradually, though, he found less and less satisfaction in merely “painting what I thought would sell.” That’s when he began turning back to the mostly American Indian-inspired figurative works that the East Coast gallery owner had warned him to avoid. “And I discovered that painting these subjects not only makes me the most happy, but I also sell the most.” Driving those sales, in part, is a highly

distinctive visual approach that makes Winborg’s paintings almost instantly recognizable. His human subjects are meticulously rendered in a realistic— but, he hastens to add, not tightly photorealistic—style with touches of impressionism that appear when viewed up close. But the backgrounds are anything but realistic. Instead, they surround his human subjects with spontaneouslooking abstract patterns created with broad strokes, slashes, and drips of paint in colors that sometimes complement, sometimes contrast with the figures and their costumes. “I love painting abstraction, too,” Winborg says, “and I like the juxtaposition between those backgrounds and the realistic faces, hands, and costumes.” During the two to three weeks it takes

him to finish each painting, working usually six days a week, the process of alternating between those two styles also helps keep him fresh and motivated. “I’ll always paint the head first and get that as refined as possible, then move to the hands,” he says. “Then, at that point, I start to apply some abstract brush strokes and work into the background of the painting to make sure my values are correct. From there, I find it really relaxing to work all day on the face and other details, and then, at the end of the day, reward myself by getting out my big painting knives and drywall trowels to apply the abstract background. It’s like therapy.” Just as therapeutic for him is Winborg’s working situation. He, Danielle, and their kids live just two blocks from

his parents’ house, where he and his father share a 30-by-50-foot studio built above the three-car garage. Each artist has his own personal work area, far enough removed from the other that he can indulge his own particular taste in music: His father tends toward Johnny Cash, while Jeremy prefers the likes of Jimmy Buffett, Bob Marley, and classic rock. “And every once in a while, we converge for a game of pool at the table in the middle of the room,” Winborg adds. Such companionable diversions aside, Winborg finds real artistic value in this working arrangement. “As an artist, it’s sometimes hard to know when to stop painting or when to fix something, and it helps to have somebody else there. We’re always critiquing each other’s work or bouncing ideas off of each other,” he says. He also savors the fact that he can easily walk home to join Danielle for lunch or to go pick up their kids from school. His children also frequently visit him at work, just as he once visited his dad. “I was given the incredible opportunity to grow up in my father’s studio, and now I get to watch my kids grow up in my own. I know that if they choose to follow in their dad’s footsteps, they will have that much more experience to help them in their own careers.” Emotion wells up in Winborg’s voice as he talks about such multigenerational relationships, influences, and artistic inspirations. “I’m extremely blessed to be an artist,” he says. “I go to bed each night excited to wake up and get the brushes dirty again. When I feel that excitement, I know that I’m on the right path, and I know that the painting I’m working on will be a trip worth taking.” E