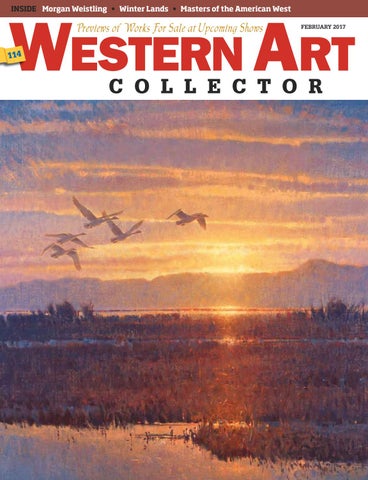 Howard Weistling at the outbreak of World War II.

A young Morgan Weistling with his father, Howard, a veteran of World War II and an aspiring artist.

A Western story about World War II, a German prison camp, Nazi loot and the POW who never stopped drawing. By Morgan Weistling

â&amp;#x20AC;&amp;#x2122;ve never jumped from a plane while it was being riddled with bullets and leaking fuel and I have no plans to do so. Of course, my father didnâ&amp;#x20AC;&amp;#x2122;t either and I can only imagine his thoughts of doom that raced through his mind as he helplessly floated down as German soldiers fired at him like a penny arcade target. Though this happened long before I was born, this event affected my own life and still does. My father, Howard Weistling, growing up in the 1930s, was a teenager with a passion for drawing comic strips. He wanted to go to art school and someday have his own comic strip but world events would soon change that. With the bombing of Pearl Harbor, my father enlisted in the Army Air Corps. He trained as a flight engineer on a B-24 bomber and on their first

mission they were shot down over Austria. He ended up at a prison camp, Stalag 1, in Barth, Germany. As you can imagine, life in a German POW camp was not a pleasant holiday. Aside from nearly being starved to death, boredom in the camp brought the morale very low. And this is where my father started to fulfill that dream he had before the war. He scavenged around the camp for cigarette wrappers and any other scraps of paper he could find and decided to create a comic strip for his fellow prisoners. My dad told me that each drawing would get passed around the whole camp and eventually would make its way back to him, and he would then add to the story when it returned. It gave the men something to look forward to, raising their sprits. As a kid I loved this story

and I was always wishing he had brought back some of those drawings so I could see them. As the war came to an end, the Russians came in and liberated the camp. My dad managed to break into the office and grab his file with his mugshot but, unfortunately, he didnâ&amp;#x20AC;&amp;#x2122;t pack his drawings so that his future artist son could someday cherish them. After the war, using the G.I. Bill, he went to Woodbury Art College, and there he met my mother, Patricia, in one of his classes. They soon married and started a family (my brother and sister are much older than me). He found it too difficult to pursue art and also provide for his family, so he abandoned his dream and worked for his own gardening business. At an early age I showed some artistic

talent, so at 19 months old my father started a little nightly ritual of the two of us drawing together. He taught me how to communicate through art, and it was during these times that he told me about the prison camp and those drawings I wished I could see. Fast-forward to me as a teenager, where at 15 I started art school and by the age of 19 landed my first professional full-time position as a sketch artist in one of the biggest movie advertising agencies in Los Angeles. My father soaked in all these achievements and marveled that I was actually making a living with art. My father had instilled in me a love for Western movies, and he and I bonded while watching them so he was excited every time I did a Western paperback cover. When I turned

toward fine art, it was a natural subject for me to paint and he loved it. He lived to see me win the Prix de West and other awards at the Masters of the American West at the Autry Museum of the American West before he died at the age of 83. As the years rolled by, I began to wonder if he had exaggerated the prisoner camp story and maybe he had just done two or three drawings and that it wasnâ&amp;#x20AC;&amp;#x2122;t like what I had imagined as a kid. Then, one day I walked into my studio and turned on my computer and found an email waiting for me that shook my world. It was from an elderly man in New York and the message said that he had a book of drawings that belonged to my dad from the war. I just looked at that email in complete shock. It

Morgan Weistling holds up a book filled with drawings made by his father during World War II.

said to call him and my fingers never dialed so quickly. How could this be? My dad said everything was crazy at the camp, Russian tanks coming and throwing it all in disarray. I was filled with questions. As I spoke to this gentleman, he explained that he had two business partners from years earlier and one of them had embezzled from the company. Before they caught him he had spent all the money on a truckload full of Nazi artifacts. In the truck were three of Hitler’s watercolors, billy clubs used at Auschwitz, Josef Mengele’s SS uniform, Hitler’s dinnerware and on and on. Being a Jewish businessman, this sickened him even more than the embezzlement itself. So, with the money spent, he now owned all these horrible reminders of the Nazis. He went about donating much of it to Holocaust museums and destroyed the rest of it. But then he said, “There was this little book of drawings, amongst all these terrible things, that were obviously done by a POW and I decided to keep it.” For 20 years he had held onto it because his family enjoyed looking at the drawings. He was getting ready to move and he came across the drawings and realized

that now, years later with the existence of the internet, he could look up the name on the cover and so he quickly found me. Then, he asked me if I wanted them—you can imagine my reply. A week later the book arrived and I held in my hands the drawings my father had told me about all my life. I think I might have cried more at that moment than I did when he died. What he had never told me was how he had made the sketchbook bound together with flattened-out metal cans as a protective front and back cover to ensure the drawings would survive being passed around the camp constantly. On the cover, he pounded the title of the story, A Western by H.G. Weistling, right into the metal, thus making it possible, 70 years later, for me to now possess it. What made this so overwhelming for me was that it felt like a part of my father had come back to me. Like he was speaking from the grave a new story I had never heard from him before. Tears welled up when I saw it was a Western. Something I never remembered him telling me. The drawings are rough but they get the story across. It’s a long tale of a cowboy

whose wife is kidnapped by bandits and that sets in motion a long chase of many obstacles in finding her. Once found, the wife now doesn’t want him and has fallen in love with one of the bandits. I can imagine my father’s fellow prisoners being on the edge of their seats wondering what would happen next. The great mystery of how my father’s little drawings, drawn in a prison camp, eventually ended up in New York in a truck with Hitler’s watercolors remains unsolved. And so, with a perfect arc to this tale, here today, I am a storyteller, telling stories of the West just like my dad did so many years ago. Morgan Weistling is an accomplished and award-winning painter whose story-driven works call back to an earlier and simpler time in American history. He shows his work at a number of major museum exhibitions around the country, including the Prix de West and at this month’s Masters of the American West at the Autry Museum of the American West. His daughter Brittany Weistling and his wife JoAnn Peralta are also prominent painters. They live in California.

Howard Weistling’s book A Western, which was created using any raw materials—tin, nails and cigarette wrappers—he could scavenge inside a German POW camp during World War II. Inside the book are a series of cartoons that tell a Western story about cowboys, bandits, stagecoach robberies and Native Americans. The book was thought to be lost, but turned up again in a trove of Nazi materials decades after the war ended. It is now in the possession of Howard&#39;s son, painter Morgan Weistling.