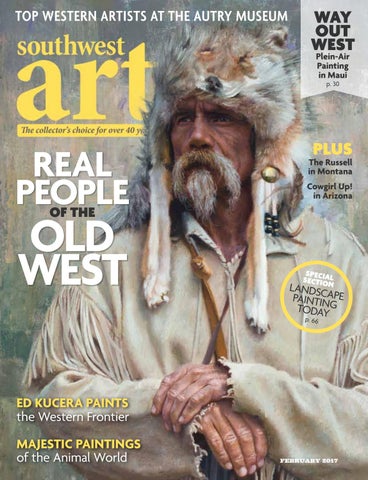 The Russell in Montana Cowgirl Up! in Arizona

“You can’t go to art school. This is not reasonable.” That was the response Ezra Tucker received from his father 43 years ago, during his senior year at Hamilton High in Memphis, TN, when he brought home a couple of applications for top art colleges, including the Rhode Island School of Design. His instructors had urged him to apply. But Tucker’s parents, loving and devoted though they were to the fifth of their six children, were also practical people, themselves children of the Great Depression who lived carefully within their modest means. They knew their son could draw and paint well, but the thought of him pursuing a career as an artist left them “shocked and disappointed,” Tucker recalls. “My father didn’t think there was any possibility of a future in it for me. He wanted me to go to Memphis State and maybe teach art.” Today, at the age of 61, Tucker has far exceeded such cautious goals. Earning a living through his artistic skills since his early 20s, self-employed as an indemand illustrator from the age of 26, and a full-time fine artist for the past decade,

he enjoys widespread respect for his lifelike, and sometimes life-size, animal paintings. Created in what he describes as a “contemporary realist” style, his works dynamically engage viewers by combining absolutely accurate renderings of his subjects with subtle impressionistic effects. “Allowing viewers to use their intellects to finish the details of my artwork is what captures their eyes and imaginations,” he explains.

Tucker’s own eyes and imagination were first captured by animals in earliest childhood. “My mom has always told stories about me drawing on anything and everything,” he recalls with a chuckle. “I was obsessed with animals. Birds, cats, dogs, tigers, lions, horses—I had stacks and stacks of drawings.” Severely asthmatic, he had no pets of his own apart from goldfish. “I watched them swim back and forth for hours and would memorize their motions and scribble them down on paper,” he adds. After everyone else in the house had gone to bed, he loved poring by flashlight through his

family’s World Book Encyclopedia, reading about and studying the pictures of animals. An aunt who was a librarian supplied him with a steady stream of books on wild creatures in the natural world, in literature, and in mythology. Tucker’s talent first found recognition during second grade at Riverside Elementary. “I could read fast,” he recalls, “and would doodle while I waited for the other kids to catch up.” One day, his teacher briefly left the room while the class silently read Aesop’s fable of the lion and the mouse. When she returned, she spotted Ezra scribbling away and thought he wasn’t paying attention. “She was angry, came over to my desk yelling at me, and I covered up the paper. She pulled back my hand and

saw that I had created my own picture of the lion and the mouse. She started crying in amazement and apologized to me. Then she took me to the principal’s office to show him what I had done on my own.” From that moment on, he was considered the school’s artist, called upon to do everything from designing stage sets for shows to painting posters to decorating the principal’s office. And thus it continued through high school, where the quality of his work won him admission to senior-level art classes starting in eighth grade. Which led eventually, of course, to him bringing home that RISD application and the confrontation with his father. Fortunately, his teacher found an ideal compromise. Right there in his

hometown was a four-year program at the Memphis Academy of Arts (now the Memphis College of Art). “My dad agreed to pay half the tuition if I worked to pay my portion,” Tucker says. And that’s exactly what he proceeded to do while earning his degree there, with a succession of night-shift jobs at places including a Mexican restaurant, a Holiday Inn, and a printing press, plus a gig loading packages onto airplanes from 11 p.m. to 2 a.m. at the headquarters of a young company called Federal Express. Tucker thrived at the Memphis Academy, where all his instructors—working artists themselves—recognized and nurtured his talent. His main mentor, Jack Lew, who is now godparent to Tucker’s three children, led the drawing classes the young artist took throughout his time there, marveling at his uncanny gift for rendering images from his imagination with precise anatomical accuracy as well as his ability to complete as many as four drawings in the time it took other students to do one. In sophomore year, Lew thought Tucker was getting bored drawing live human models in class and inquired what was wrong. “I asked him if he could get me a live animal to draw instead, and he pointed out that the city zoo was right next door.” So, for the next two and a half years, Tucker left the campus during class to roam the zoo and draw creatures at will. Lew also directed his attention to books on successful animal artists of the past and present, ranging from the great 18thcentury English master George Stubbs to 20th-century American painters like Carl Rungius and Bob Kuhn. “I really educated myself on what wildlife art could be,” he sums up. During Tucker’s senior year of college, he was recruited by Hallmark to join a stable of about 300 greeting-card artists at its headquarters in Kansas City, MO. He began there in May 1977, 10 days after graduation, and stayed for five years. “It was graduate school for me,” he says of the supportive but intense environment. But eventually, bored with “doing a lot of bunnies for Easter cards, and butterflies and insects and floral paintings,” and encouraged by the advice of a visiting guest artist, he began to do freelance illustration work at night,

including fantastical creatures for a sci-fi and fantasy magazine. Eventually his freelance earnings outstripped his salary, and in 1983, Tucker secured agents in Chicago and Los Angeles, moved to L.A., and launched his career as an independent illustrator. He quickly rose to prominence as one of Southern California’s leading artists for hire, producing a vast menagerie of photo-realistic illustrations for clients including Coors, Anheuser-Busch, Disney, Sea World, 20th Century Fox, George Lucas, and Steven Spielberg. Over nearly three decades, his works garnered numerous gold, silver, and bronze medals from the Society of Illustrators of Los Angeles. Success, however, brought so many demands that Tucker found himself working 18-hour days, including every weekend and holiday. Wanting a quieter life somewhere they could raise a family, he and his wife, fellow Hallmark artist Nancy Krause, moved in 1987 to Solvang, two and a half hours north of L.A. in the Santa Ynez Valley, an idyllic area that is home to wineries, horse ranches, and scenery that attracts many Southern California artists. Gradually he began gaining commissions to paint portraits of his neighbors’ Thoroughbreds and Arabians as well as their dogs. “That helped with my transition to the fine-art market,” Tucker says. But a still bigger move and transition were in the works. In 1999, Tucker and his wife moved their family to the small town of Monument, midway between Denver and Colorado Springs. A year later, on three acres they purchased, they built a home with an attached studio where Tucker could work. “It’s a great environment for me, in a pine forest 8,000 feet above sea level, with a lot of wildlife—mule deer, bears, cougar, foxes. Last year, we even had a moose come through,” he says.

to apply himself seriously to becoming a full-time fine artist. “I wanted to have a distinctive style, one that connects to the viewer,” he says. Advice from his wife, whom he describes as his art director and editor, was critical to that process.

While his illustration work was tight and polished, he began to focus more on showing his draftsmanship—leaving visible on the canvas, for example, the freehand pencil drawing he makes before applying layers of acrylic paint, which he prefers for its quick-drying qualities. In concert with sometimes abstract backgrounds and realistic details, the results often seem as if the subjects are emerging from the canvas while intimately holding the viewer’s gaze. “It is what is implied that makes fine art interesting for me,” Tucker explains. Such an approach proved interesting for galleries, too. In August 2004, the first one he approached, Elliott Yeary Gallery in Aspen, instantly took him on and

asked for a dozen works for a solo show in 2005. Tucker delivered 27 paintings, 25 of which sold within a year. Seven more galleries now represent him, and he has also participated in such prestigious events as the Briscoe Western Art Museum’s Night of Artists in San Antonio, TX; the Society of Animal Artists Annual Exhibition; the Cheyenne Frontier Days Western Art Show and Sale; and, coming up this month, the Southeastern Wildlife Exposition in Charleston, SC, where he is the featured artist. Regardless of the venue, Tucker sends his paintings into the world with very specific goals. “In my opinion,” he concludes, “a successful work of fine art should be educational, inspirational,

and entertaining and evoke an emotional response from the viewer. I hope that my inspired likenesses of wildlife may, in turn, inspire and connect people to the conservation efforts necessary to protect the animal species of our planet.” E