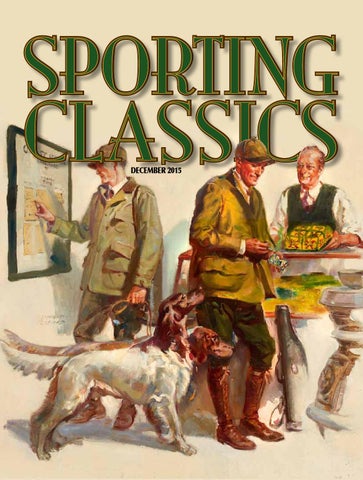 John Banovich enjoys an up-close encounter with a Asmallrtistherd of elephants while on a photo safari in Botswana.

Acclaimed artist John Banovich will go to any length—or depth—to gain an intimate view of his wild subjects.

e’s a big, strapping, pony-tailed figure, known for his fearless pursuit of his outdoor passions and revered for his success in connecting with nature’s untamed beasts. And his love of all things fanged and ferocious gives him near-feral status. In other words, if there were a casting call for Tarzan, artist and

adventurer John Banovich would walk way with the role. But it’s the work of this extraordinary painter that has long captivated me, and that’s why I chose John to provide a signature piece of artwork for my show, Ultimate Sportsman’s Lodge that airs on Great American Country. My wife, Amy, and I wanted something transcendent and arresting to complete our master suite and John was the first name that came to mind. “You gave me complete latitude to bring my vision to life,” John told me

when I interviewed him awhile back. “It’s an intimate space, the master bedroom sitting area, so it’s private not public. And the scale of the room is big-ceilinged but not big volume. So, in my mind that’s the ideal space to show a piece of large, contemporary art.” John quickly chose his painting, Tusk, which is a stunningly detailed close-up of an African elephant’s expression-filled face. I was thrilled with the choice, not just because of its

with and capture the essence of his subjects, like wading neck-deep in a croc-infested, hippo-laden watering hole. I’ll let John tell the story. “I was in Botswana and needed an intimate encounter with elephants, so I hired safari guide “Mad” Mike Penman because nobody can get you closer to anything wild than Mad Mike. “For ten days we spent every hour from noon until after dark watching the elephants come and go from this watering hole. “Along that ten-day journey, Mike and I decided it would be a cool idea to try wading into the water to get closer. We knew it harbored some crocs and hippos, but if the elephants were there, our theory was that those hippos and crocs wouldn’t bother us. Well, when I first entered the water, two hippos submerged right away and I thought oh no. Then they surfaced right where they went down so I thought, okay, I’m good. “We made our way over to the elephants, the two of us just talking nice and calm the way cowboys do to settle down livestock. The five males were relaxed as long as we were almost

pure artistic merit and perfect fit for the space, but because his portrayals of elephants have catapulted John to the forefront of the wildlife art world. “What’s so arresting about that painting,” John says in his enthusiasticyet-somehow-understated way, “is what’s not there . . . what’s omitted. It’s one eye and one tusk and the rest of the image of the elephant exists off the canvas.” So in a way, we have an entire elephant in the Dorsey family’s Ultimate Sportsman’s Lodge, but like jazz, the most fascinating things happen in between the notes, and our pachyderm is present and poignant in the space without consuming it. And the intimate detail—each furrow and fold—is so real that you never really finish looking at and learning about this magnificent beast. “Contrary to what people think, elephants are the hardest animals to paint,” John notes. “Those lines . . . you can’t make them up.” And believe me, he doesn’t. John is the hardest working and most daring wildlife artist I have ever encountered. He will go to any length to connect

completely submerged with only our heads out. Soon enough, we were five feet from them . . . we could have touched them. It was exhilarating and terrifying at the same time. “Then all of a sudden a breeding herd appeared out of nowhere and was coming to the watering hole like they couldn’t wait to get there. Out in front there were these little ones and they bolted straight into the water and stopped short right in front of me. When then they came up, they were totally calm. Then the rest of them came in and at one point, there were 50 elephants in front of me and, as long as I stayed mostly submerged, they were fine with my presence.” Okay, so that’s John Banovich’s dedication to his craft for those of you keeping score at home. Another form of dedication is John’s big-picture commitment to wildlife. He uses his art as a platform to promote conservation, connect disparate groups, and preserve the wild animals he reveres. “It’s the Banovich Wildscapes Foundation,” he says. “We started it in 2005 as a 501(c)3 nonprofit organization that fosters cooperative efforts to conserve the Earth’s wild places, benefitting the wildlife and the people who live there. “We build bridges between the sportsman’s conservation world and the environmental conservationists. Sadly, we all were one and the same for about 60 years from the 1900s to the 1960s, then a chasm began to grow and today it’s huge. We still share a lot of common ground, but there’s no bridge in between. So the word ‘foster’ is really key. We bring organizations to the table that can link up and become a catalyst for change and cooperation.” One thing I can say about John Banovich: Along with being a great artist, sportsman, and advocate, he’s a catalyst . . . for exceptional art and lofty goals, coupled with enough personality and presence to perhaps be coming to a theater near you in a Hollywood remake of Tarzan. n

At his Studio West in Carnation, Washington, Banovich puts the finishing touches on a lion painting, part of a special commission featuring Africa’s Big Five. S