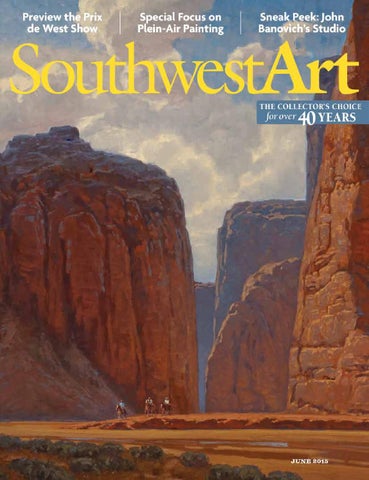 MyWorld A VISIT WITH JOHN BANOVICH AT HIS STUDIO IN CARNATION, WA Text by Bonnie Gangelhoff · Photos by Peter Kuhnlein

Describe your studio. My studio is a place where ideas are conceived, born, nurtured, and given life. It’s a womb of creativity— the most intimate place I know. When I relocated my studio to Seattle, we wanted to find a location that felt as “Montana” as it could get. We found 20 acres bordering 90,000 acres of forest preserve in the foothills of the Cascade Mountains. We

have every conceivable animal in western Washington around us, and we can be in downtown Seattle in 45 minutes. The studio looks out over ponds filled with cutthroat trout and a forest of cedar and Douglas fir trees. It is very peaceful. What elements were important to you in designing the studio? Studio West is the

third studio I have built, so I was able to incorporate all the changes I discovered having painted in my Rivertrees Studio, which is on the banks of the Yellowstone River in Montana’s Paradise Valley and now owned by musician John Mayer. That studio and my new one had to have lots of soft daylight, so I used frosted skylights to prevent any hot spots during the summer solstice. I

chose a lot of heavy, vintage materials— old wood from a reclaimed New York barn, high-school-gymnasium bleachers from Montana, and a stained-glass window— giving the studio a timeless appearance. I visualized that if Ernest Hemingway were a painter, this might be a studio he would design. Lastly the studio had to be large with huge doors to accommodate jumbo-

sized canvases. I often paint on nearly 10-foot-long canvases, so in this case, size did matter. What kinds of objects do you keep in the studio? This is where I keep artifacts from my travels around the world. My largest collection of objects is skulls, both herbivore and carnivore. There is something

so beautiful about the simple lines of skulls. They are like organic sculptures and also are very valuable to reveal what’s under the skin when painting shape and form. What attracts you to painting wildlife? There is an ancient mystery in the eyes of wild animals. Looking deep within, we come face to face with ourselves, for the wild

animals are the windows to our past and the prophecy of our future. Painting animals is all I have ever done or wanted to do. It is my raison d’être. There is simplicity to nature, an honest truth. Its residents are complete, moving in a harmony and balance we will never understand. The wild animals I now capture in paint will someday only be experienced in a captive environment, if at all. Like the western artists of the last two centuries who painted the world they lived in, I am inspired to do the same thing—paint the vanishing wild kingdom around me. When did you get interested in African wildlife? When I was a young boy, I was always painting big things with big teeth. I fantasized about Africa—a continent that has so much. It’s like stepping back in time to the Pleistocene era. The big beasts are still there, moving like they have for millions of years. I started painting those animals from that early influence of anthropomorphizing Disney characters, and I still do, I guess. I just didn’t grow up. By the end of

this year, I will have been to Africa 40 times. Describe your annual “for sale by draw” events. I feature about 15 new African paintings that debut with a private preview online. The physical show begins at the Dallas Safari Club in Texas in January. Then in February, the collection moves to the Safari Club International Convention at Mandalay Bay in Las Vegas, and at the conclusion, the 15 “for sale by draw” winners are announced. What is the mission of Banovich Wildscapes Foundation? The foundation was established in 2007 because I saw there was a chasm between the sportsman conservationist and the conservationist environmentalist. The foundation’s mission is to foster cooperative efforts to conserve the earth’s wildlife and wild places, benefitting the animals and people who live there. If your studio were on fire, what one thing would you save? My dog, Houston.

What do you enjoy doing when you are not painting? Playing with my two little girls, Siana, 4, and Mara, 2. What is one place people will never find you? A local bar. Where do you like to take people when they come to visit you? We take visitors to Pike Place Market in Seattle, where they can experience the heartbeat of the Pacific Northwest. E

attention art lovers: Do you know of an extraordinary art studio we should feature? Send your ideas to southwestart@fwmedia.com.