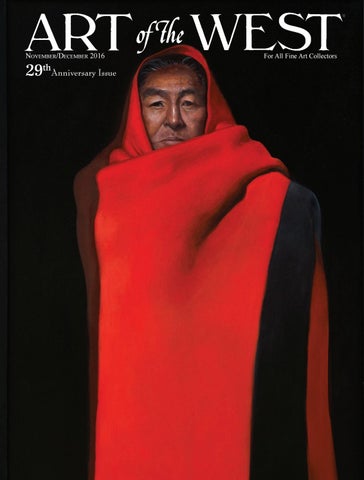 Majestic Hilltop, oil, 36” by 36” “In this piece, I wanted to fill most of the picture with the figure and horse. It was important to show the figure on a kind of hilltop, thereby having an inspiring view of the poplars and distant mountains.

im Solliday’s paintings do not lend themselves to easy categorization. Clicking through the slides on his website once, twice, a couple dozen times, my eyes linger on the expressive faces, the light-drenched landscapes. Are these works realistic? Well, no, not exactly. No human eyes have ever been that wise or that kind. No natural light is quite so warm and inviting. I’m not looking at reality; I’m looking at something with more beauty and more potential for magic than mere prosaic reality. I find myself looking to literature instead, where there’s a term that feels close to apt: magical realism, that genre of fiction in which the world exists as it really exists—mostly. But the fantastical waits around every corner, often just out of frame. 54

Solliday, who’s been painting his singular creations for well over two decades, laughs with pleasure when I confess that I don’t know how to describe his work. He’s clearly witnessed such difficulties before, and he’s prepared to ruminate aloud on the subject. “Essentially, I’m taking from the Impressionists, I’m taking from the Traditionalists, I’m taking from about four or five different schools,” he says. “There are certain elements in all those schools that I like very much. The only school that I’m not very interested in is complete abstract art. I’ve never had much use for avant garde splashes of paint on a canvas.” Although his art defies definition, the evolution of Solliday as an artist is fairly straightforward. Artistic from the start, he’s been drawn to Western landscapes for his entire

life. “I always had Western art in my heart, ever since I was five,” he says. Solliday’s earliest influence was his father, who created commercial art for the aviation industry, and throughout his life he’s learned, borrowed, and outright stolen ideas and techniques from a variety of other talented artists. “I had mentors—whether dead or alive, by the way—and I inculcated a lot of their thinking into my work, and then it became Tim Solliday’s art,” he says. Solliday’s first formal training was with Theodore Lukits, whose traditional background and disciplined approach provided him with the skills to realistically depict a figure or a scene. Solliday was concerned, though, that too rigid an adherence to realism would lend his paintings an inanimate, static quality. “I always want to make a statement that

Immigrants and Natives, oil, 30˝ by 40˝ “This subject is another favorite of mine, as it has the interesting element of the trade objects, which add color and interest to the scene. The interaction between the Indian and the white man is always a thoughtful one to me, as well.”

doesn’t overdo the literal part,” he says. “When everything is too literal, it becomes stiff.” Solliday found himself drawn to the work of mural painters and illustrators, particularly Frank Brangwyn, M.C. Wyatt, and Dean Cornwell. From muralists, he learned the power of strong, dynamic design. “What you’re seeing in my style is a kind of animation that I’ve put into it, the sort of animated element of movement in the figures—a muralistic kind of outline to make it carry from a distance and make the design elements powerful,” he says.

Western Skies, oil, 36˝ by 24˝ “I love views from high up, and this was a chance to put a cowboy and horse together with a Western background in beautiful sunset light.”

Peaceful Pastures, oil, 24” by 30” “A cowboy and his dog always make for a good Western subject. The pastures show the cattle at rest, thereby this title, which speaks for itself.”

And from illustrators, Solliday learned the importance of storytelling through art. “It’s a feel thing,” he says. “You have to feel the movement, and then the movement element has to come through in the lines that you depict. My ideas are a little different than a lot of the other guys. I tend to go toward storytelling; I like to tell a story. If you get too wrapped up in detail, you start to lose that story.” Some of Solliday’s favorite stories involve American Indians, who figure in the majority of his paintings. “Of course, I’m in the cowboy world, too,” he says. “You’ll find me doing a pioneer, or a cowboy, about every fifteenth picture.” Solliday has had a long and mutually respectful relationship with members of various tribes, and he’ll gladly reminisce about his experiences on and around the reservations of the Southwest and beyond.

Cowboy Courtship, oil 24˝ by 30˝ “With a springtime setting, I wanted a scene of romance and brightness. I think the colors match the mood of the riders, and for this again I give thanks to the great illustrators for inspiration.”

“I was in the Old Hubbell Trading Post for a couple of seasons,” he says. “The government actually invited me to stay there. They put me in one of those hogans. They’re great, by the way, those hogans; cool in the summer, warm in the winter. It’s amazing. I spent some time talking to the guys who were doing the drywalling and the Indians who were doing the construction. We talked country-western music—those guys love country-western music—and a little bit of politics.” Solliday’s paintings convey an easy familiarity with American Indians, combined with a deep interest in their history as a people. Although he strives for historical 58

accuracy with regard to his subjects’ appearance and dress, he places a higher premium on emotional truth. “Whether it’s right or wrong, I’m not too worried about whether I’m depicting a fantasy Indian or not,” he says. “I’m depicting something that’s in my heart, something that I have a passion for. I want to make these guys look heroic at times; other times, it’s just these guys as ordinary human beings. They’re a wonderful people.” Solliday draws from a wide variety of source material. He snaps pictures at powwows to capture details of traditional and modern Indian dress. He takes to the outdoors, sketching landscapes near his home in Pasadena, California, as well as in other areas of the Southwest. Friends and acquaintances model for him. Books and historical documents provide key details. He has combined all these resources into a vast library of material, and he goes

to this library often in the course of his work. A typical Solliday painting starts with what he describes as a “loose compositional scribble,” often so abstract that even he isn’t sure what it will become. He examines the scribble, discerning shapes and structures in the lines. “I will see, ‘Oh, yeah, this looks like a figure here; this has a horse element to it,’” he says. “I’ll start to put an idea together. After I’ve gotten a few shapes the way I want them, then I’ll come up with the idea itself. I’ll refine the shapes without any reference in front of me at all.” At that point, Solliday isn’t concerned with literal truth; in fact, he willingly takes artistic liberties. “I’ll make it truthful enough that it reads later, but I’ll add something to make it better,” he says. “The way to keep this stuff from being too literal is not to have everything exact, but to add things in a rational and truthful way,

a natural way. You may actually put them together in a way that might not happen naturally, and that’s where I think some of your magical element comes in. It may not actually be truthful in nature, but it doesn’t matter, as long as it makes the whole idea work. That’s where you get this whimsical, kind of more free-spirited way of putting the picture together.” With the basic idea in his mind, Solliday creates a small, but very detailed, sketch. He then creates a color study for the finished piece. Those two references, along with pictures and sketches and other source material that he sets within easy reach of his easel, and guide him for the remainder of the project. Solliday likes to scale his smaller sketch up manually. “I don’t ever magnify anything or project anything,” he says. “I scale them up with an old scaling system with lines. I square it all off.”

With the outlines in place, Solliday begins filling in the colors. “When you paint from nature, you need to paint all over,” he says. “You don’t start in one spot; you paint all over.” Through long years of experience, Solliday has developed an approach to creating each painting that he knows will produce the result he’s after. “It’s very satisfying for me to do these things,” he says. “I’m always envisioning the finished product, and I have a pretty good idea of how it’s going to come out, beginning with those little compositional scribbles. I make sure I stick with the sizes, shapes, and movement that are in the little study. Once that’s put in the larger piece, it’s usually very successful.” Solliday talks for well over an hour, the conversation ranging far and wide. He is married and has a son in college, a daughter in high school. He is interested in politics, although he declines to name a specific can-

Hunter’s Moon, oil, 18˝ by 24˝ “I looked back to the old illustrators and storytellers for inspiration for this idea. The silhouette of the young brave against the moon makes for a haunting and moving scene.”

didate or party. He tells stories; he explores specific paintings in depth. He also philosophizes, reminisces, jokes, and reflects. “It’s a blessed life I lead,” he says. Whether he is speaking, or wielding a paintbrush, Solliday is first and foremost a storyteller, an artist who strives to spin a good yarn that has just the right gleaming kernel of artistic truth. Like the best storytellers, he asks us to willfully suspend our disbelief. In return, he gives us something that is absolutely true and, at the same time, absolutely magical. Clover Neiberg is a writer living in Portland, Oregon.