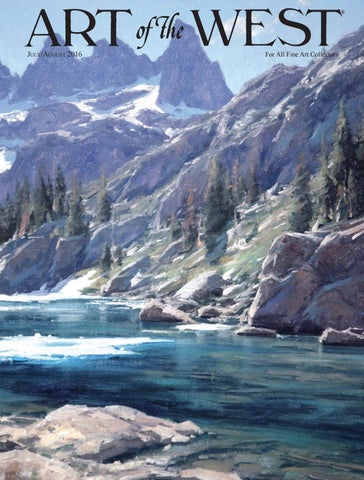 att Smith has been selling his paintings since the early ‘80s, when he was just 17, but when asked when he realized that he really was an artist, he laughs and says, “I don’t know that I am yet. I know I’m a painter, but I don’t know if I’ve graduated to really being an artist. I’m continually trying to improve and take it to the next level.” Smith’s paintings have earned him inclusion in several prestigious art shows, including the Prix de West and Masters of the American West, and are eagerly sought after by art enthusiasts from around the world. But Smith is a modest man, committed to creating the best paintings possible and, in the process, to sharing the beauty and wonder of landscape scenes from the California coast to the Arizona desert to the Colorado mountains. Born in Missouri and now living next door to Tonto National Forest, outside Scottsdale, Arizona, Smith says he often jumps on his Polaris Sportsman and heads into the almost 3-million-acre area, “looking for paintings.” And he finds them in the area’s diversity, which ranges from desert to mountains and includes rivers,

Above - Evening Glow on the Minarets, oil, 25˝ by 36˝ “My goal in this painting was to capture that beautiful, soft, warm light commonly seen as afternoon gives way to evening.” Opposite Page - The Key Hole, oil, 16” by 22” Located in Laguna Beach, the Key Hole is a favorite subject of plein air painters. This studio piece was worked up from several on-the-spot paintings I completed while trying to escape the heat of an Arizona summer.”

lakes, and a myriad of plants and wildlife. His quest for inspiring scenes takes him across state lines, as well, to places like Missouri, Tennessee, Nevada, Maine, and New Hampshire, as well as to Europe. But it is the American West that has captured Smith’s heart and propelled his career. Smith’s drive to create art had its roots in his childhood. “It’s one of those things that started so early I don’t remember not doing it,” he says. “I loved to draw; I never stopped.” His mother had majored in art history in college, his great-grandmother did some amateur painting, and his parents collected art on a small scale, so Smith was exposed to the craft at an early age. When he was in his early teens, Smith’s father, who worked for Motorola, was transferred to Europe to open a manufacturing facility there, so the family packed up and moved, spending two years in France and one year in Switzerland. During those three years, the family visited castles and museums and took long drives in the countryside. As Smith recalls, the first time he painted was in France and, by the time they moved to Switzerland, he was serious about creating art.

And he was selling his work, which consisted of pen-and-ink and watercolor drawings of Native Americans, subjects he researched through books and that seemed to fascinate the locals. “My dad’s friends would come for dinner, and they would buy them for maybe $75,” he says. “I sold enough paintings in six months to buy a car, when we got back to the United States.” Spurred on by that early success, Smith knew that creating art was his calling. “It was something I knew I would always do, but whether I could make a living with it was something else,” he says. “I knew it would be with me the rest of my life.” In 1978, at the tender age of 18, Smith already had gallery representation, something that came about unexpectedly. “I took one of my paintings in to have it framed and, when I went back to pick it up, they

Saguaros of Coronado Mesa, oil, 16˝ by 12˝ “I spend quite a bit of time painting in and around the Superstitions, southeast of my Arizona home. It’s the Sonoran Desert at its best and offers a real variety of subject matter. In this particular piece, I enjoyed the way the Saguaros cast those dark shadows back toward that front-lit cliff.”

Early March Under Sheep Mountain, oil, 16˝ by 20˝ “This was one of the first studio works I completed after a recent trip to southwestern Colorado. We timed this particular trip around a fresh snowfall, followed by clear skies. Our patience paid off, as we had a week of perfect conditions.”

said the manager would like to talk to me,” he says, adding that the gallery took on his work, quickly selling that first painting, a pen-and-ink and watercolor collage of Plains Indian imagery. His practical side took over by the time he enrolled in college and, at the urging of his father, he planned to major in business marketing. But you know what they say about the best-laid plans. “One of the electives the first year was a drawing class, and I took it,” Smith says, adding that after a few classes, the instructor took him aside and said, “You’re really good. What is your major?’ I told her, and she said, ‘Would you consider art? I think you can make something of this,’ so I switched to art.” It was rough going, however, because Smith wanted to paint traditional subject matter in a tradition style and was the subject of some ridicule by upper classmen, because abstract was the style of the day. In his spare time, he visited galleries and was impressed by Jim Reynolds’ paintings. During his third year of college, he enrolled in a workshop taught by Reynolds and told his

college instructors he would not be in class during that week. “Two of them said those days would be unexcused absences and that they would have to dock me a grade,” he recalls, saying he was fine with that because of the opportunity to study with Reynolds. “It was a great experience. He had an impact on me before I ever met him. I would go to CAA [Cowboy Artists of America] shows, and his paintings always stood out. We later showed at the same gallery, and it became a good friendship. He was willing to help young artists, but you had to be serious about it.” After earning a Bachelor of Fine Arts degree in 1985 from Arizona

Superstition Wild, oils, 12˝ by 10˝ “This particular spot is very difficult to access, no matter how you cut it—plenty of boulder hopping, water crossings and absolutely no established trail. That’s why I love it, and that’s why I felt the need to haul my painting gear back there and have at it. It was worth the effort.”

San Felipe Freeze, oil, 18˝ by 24˝ “I was traveling from Santa Fe to Scottsdale recently, when I came across this normally dry wash, covered with several inches of fresh snow. It was cold and a bit windy, but too good to pass up. With that in mind, I pulled over, found the least uncomfortable spot I could, and painted an on-the-spotter. I used that small piece and some photo reference to complete this piece back in my studio.”

State University, Smith says he was very ambitious and worked hard at his art. He had pulled his work from that first gallery a couple years earlier, after deciding that he wanted to focus on painting landscapes rather than portraits of Plains Indians and wanted to perfect his new subject matter before moving forward and offering that work for sale. “It was five years until things came into perspective for me and things took off,” he says. “I was able to support myself, because I was married to a woman, who had a job, and we were able to stay alive.” Smith’s career was progressing well, but the marriage failed although nine years later, in 2009, he married Tracy Avant, an artist he had met at the Scottsdale Artists School. “It’s a lot of fun,” he says of being married to an artist. “We go to museums and shows, and she’s gone on horseback trips with us; she’s a good sport.” As he perfected his craft, Smith took workshops from the likes of Paul Strisik, Michael Lynch, and Clyde Aspevig and was so appreciative of their willingness to share their knowledge that he also teaches. His latest workshop was at the Plein Air Convention in Tucson, Arizona, in April, July/August 2016 • ART of the WEST

Dogwood Canyon, oil, 10˝ by 12˝ “I spent two weeks teaching outdoor painting workshops at the Big Cedar Lodge in Missouri a few years back. On my down time, I’d get out to paint and explore the local scenery. One of the most interesting spots I found was Dogwood Canyon. This is one of the plein air pieces I completed while exploring that canyon.”

and he teaches at least once a year at the Scottsdale Artists School. “I started teaching there in 1990, an outdoor landscape class,” he says. “I teach anywhere from one to five classes a year. If you want to understand what you do, try to verbalize it to a beginner. It really helps to analyze what you are doing and why you are doing it.” The thrill of the hunt—in this case a landscape that inspires Smith—continues, as he travels the country. “Everywhere is spectacular, if you’re able to key into it and celebrate it,” he says. “When I head out with a preconceived idea of what I want to paint, I spend all day just looking for it, so instead I try to keep an open mind and let the landscape talk to me. I get out in blocks of time, maybe block out one or two weeks, and then head inside for a similar amount of time. “I’ll go out and do small paintings and finish them indoors. I trained myself to do that early on, because I didn’t have a studio. I might put the small one in a frame, after I have used it for reference, and give it to a gallery. I don’t do a literal translation; I like to be expressive and go with the flow. The field sketch is a springboard for what I’m going to paint. Outdoors, you’re reacting emo44

tionally and quickly; indoors you’re more intellectual. I take photos for topical reference; I get the color and value reference with sketches.” Smith laughs when asked how he would describe his painting style, then responds, “It’s kind of impressionistic naturalism. I’m a stickler for the character of the medium in oil. The contrast between thick and thin is what is so beautiful to me, and it goes above and beyond the subject. My style has evolved over the years. It happens through growth, exposure. You begin to understand design and color theory on a deeper level. I think I’ve gained a little more finesse.”

Vicki Stavig is editor of Art of the West.