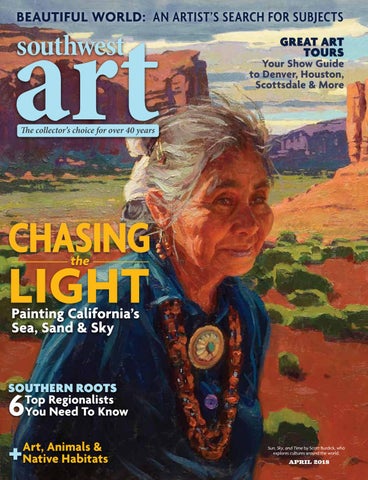 Sun, Sky, and Time by Scott Burdick, who explores cultures around the world.

“Even if I couldn’t sell anything, I’d still be doing it.” So declares Adam Smith about painting wildlife; his chosen career path is much more than a way to earn a living. This Montana artist’s love of nature pervades every facet of his art-making, and his passion for capturing and interpreting animal life drives and sustains him daily. A mountain goat

upcoming shows climbing over a snowy ridge, a herd of bison standing majestically on the plain, a grizzly bear navigating a river currentâ&#x20AC;&#x201D;these are just a few of the rare and remarkable glimpses of an untamed world that Smith captures in astonishing detail and with the emotion of one truly invested in his subject matter. Smith began drawing prolifically as

a young child and was attracted to depicting animals from the start. Living in Montana from the time he was 9 years old, he was surrounded by domestic pets as well as wild animals like elk, deer, and bears. This proximity to nature in his everyday life allowed him to hone his love for animals and to develop a deeper appreciation for the natural world.

“Nature was just a part of who we were as a family,” he says. The young man drew in pencil exclusively until the age of 16, when he decided to try his hand at painting. He entered the Montana Junior Duck Stamp Contest in 2001 while still in high school and earned a Best of Show award. His initial foray into painting ended there, however, and upon graduating, he enrolled in auto-technician school, temporarily putting art on the back burner. Before long, though, the hobby he had taken up as a creative outlet and joyous expression became a calling he couldn’t ignore. After a brief stint as an automotive technician, during which he worked on cars by day and his canvases by night, Smith decided to devote his life to paint-

ing full time. That was 12 years ago, and since then, his passion for making art has only grown. “It was certainly a blessing,” he says of his career change. Smith came to his profession on his own, but he does carry on an artistic legacy. The son of renowned wildlife painter Daniel Smith, Adam grew up adjacent to, although not necessarily in the shadow of, his father’s artwork. While he enjoyed drawing and painting throughout his formative years, young Adam never felt pressured by his father to pursue fine art. “He didn’t teach me a whole lot,” Smith says of his father, as he considers the role simple genetics must surely play in his innate artistic ability. Of course, the elder Smith offers guidance now and then, but over time,

painting animals has emerged as more of a shared interest than a craft passed down from one generation to the next. The two artists routinely spend time together as father and son, friends, and colleagues. They often travel, visiting such wildlife-rich places as Yellowstone and Glacier National Parks and Moab, UT, near Daniel’s home. Of course, professionally, they exchange painting critiques and tricks of the trade. Smith lives today near Bozeman, MT, at the foot of a mountain, where deer, elk, and foxes roam freely through the nearby farmland. While he’s able to find plenty of subject matter near his home, he also loves the thrill of exploring new and faraway places. His favorite stomping grounds include Yellow-

stone, Glacier, Denali National Park in Alaska, and Jasper and Banff, Canada. He has traveled to Africa as well, where he painted the iconic species of the continent, including lions, zebras, giraffes, and elephants.

Perhaps the most vital part of Smith’s creative process comes at the beginning, when he treks into the wild to find both animals and inspiration. Smith ventures out into nature yearround, often concentrating his efforts in the fall. He braves all manner of elements, including extreme temperatures (sometimes as cold as 26 degrees below zero), snow, and rain, all while toting several cameras, lenses, and other equipment. His wife, who enjoys photographing as well, often accompanies him. In these sometimes harsh environments, Smith sets up his tools and patiently waits to encounter the bears, bison, wolves, elk, mountain goats, bighorn sheep, mountain lions, and bobcats that populate his paintings. “One of the best parts of being a wildlife artist is going out and researching. I do all my own reference and gathering,” Smith says. He finds as much fulfillment from going outside and experiencing nature as he does from actually painting the animals. “If I don’t get out enough, I start to lose a little bit of that excitement. I always have to be gathering new ideas and new inspiration,” he adds. Though there are days when he comes away with little to show for his time, he nevertheless finds motivation in the act of exploring and absorbing his surroundings. “Being out in nature and observing animals—you can grab inspiration just from that even if you don’t capture anything worthwhile. You can bring those experiences back into the studio.” Smith is as meticulous in his photography as he is in the eventual painting, searching not only for a clean shot of the animal but also for the elements of an

One of the best parts of being a wildlife artist is going out and researching. I always have to be gathering new ideas and new inspiration.

aesthetically appealing vignette. He explains, “When photographing subjects, I try to compose with the camera. The way I crop and the amount of landscape that’s shown is always on my mind. Wildlife is very unpredictable, so I just go with the flow. You rarely ever get a perfect shot, but the beauty of painting is the ability to create one.” All of Smith’s significant painting happens in his studio, where he begins laying out each piece with sketches and compositions drawn from his reference photographs. He likes to maintain an energized atmosphere, with music filling the space. “It helps me get into painting mode,” he says. He began playing the guitar at the age of 8 and has sustained that love of music throughout his adult life. Smith renders his animal figures and surrounding landscapes with exceptional naturalism, each element tightly constructed and radiating the spirit of the moment. Likewise, the individual character of each animal comes through, often emanating from one focal point. “So much can be said just with the look in the eye of a predator, especially a big cat—they just have that intensity,” says Smith. In addition to portraying his subjects in a thoughtful and engaging manner, he strives to communicate his physical and conceptual journey into each animal’s habitat, to show people what he was thinking and feeling while observing the scene, and to convey the mood of the place. “I spend quite a bit of time trying to tell a story or show a personality or feeling and share what I experience out in the field with these animals,” he explains. Smith has collaborated with several conservation organizations, creating prints for Ducks Unlimited, Ducks Unlimited Canada, and the National Wild Turkey Federation. “Wildlife is a huge part of my life,” says Smith. “If I can help connect people with nature and wildlife through my paintings, that’s a huge plus. The more people that connect with wildlife, the more likely they are to appreciate and support conservation efforts.” Relating to his audience on visual and emotional levels is important to Smith, and he always appreciates it when his paintings tap into a viewer’s personal

memories or experiences. In 2015, he received the Collector’s Choice award at the popular Western Visions show and sale, held each fall at the National Museum of Wildlife Art in Jackson, Wyoming. “I was completely shocked by that. It was my first award,” Smith remarks. His winning painting featured a pronghorn and was based on a scene he encountered in Yellowstone. The award especially delighted him because the piece was his first large-scale painting of a pronghorn. “It was quite the honor and very flattering,” he says. Currently, Smith is preparing to exhibit new work in the 2018 edition of the Western Visions show. “I’m very excited for that.” Of his path going forward, Smith says,

“I like to see how things develop naturally.” His dedication to continual growth plays a large part in his work, and he fully expects to broaden his artistic reach now and in the future. “You’re always growing as an artist, striving for better,” Smith says. “As I’ve grown, I’ve become more confident in my abilities. It can be a little intimidating, trying to branch out and give yourself more freedom.” Yet Smith continues to forge ahead. As he has settled into his own style and process, Smith’s paintings have evolved into more complex compositions, comprising multiple references and concepts. What began as a collection of animal portraits has matured into narrative interpretations of wild-

life in its habitat, each one highlighting both the noble creature and its environment. “It’s something I always want to be doing. I can’t imagine not painting,” says Smith. “I love what I do. I hope and pray it’s something I can do for the rest of my life.” E

Elizabeth L. Delaney is a freelance arts writer and publications editor based in Charlotte, NC.