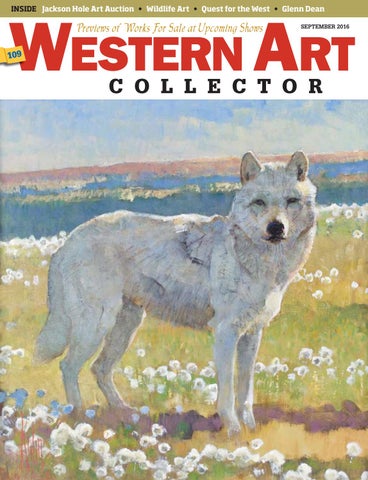 t only 32 years old, Adam Smith has emerged as a formidable force rising through the ranks of Western art. His detailed wildlife pieces have already been seen in major museum exhibitions such as the Quest for the West at the Eiteljorg Museum, Western Visions at the National Museum of Wildlife Art, and Masters of the American West at the Autry Museum of the American West, where he’s been a guest artist for two years. This September, he will take Jackson Hole, Wyoming, by storm with a return to Western Visions, as well as a solo show beginning September 1 at Trailside Galleries. Sharing My Vision will feature 10 new works from the Montana artist spanning a variety of subject matter, from bears and bison to mountain lions and wolves. He says the title of the show refers specifically to his interest in the wildlife genre. “When you’re out in the wild, you’re just encompassed by so much. Everywhere you look in the world is something to grab onto for inspiration,” Smith says. “I have a passion for wildlife, so wildlife is the way I interpret

nature and the world around me. For this show, I’m excited because I painted some things I’ve been wanting to paint for a long time.” The artist, who is the son of accomplished wildlife artist Daniel Smith, says his father was an early an inspiration for him. “He mentored me a lot, but he never gave a lot of instruction

so I could learn myself,” Smith says. “He mostly taught me about patience, and how to take it all at your own pace. The process of painting can take a long time, especially when you want a bit of detail in your paintings. You just got to keep plugging away, never be in a huge rush and let it happen at its own pace. I set personal goals for

myself, but if it takes longer, you just go with the flow. That was valuable advice to hear.” When you see Smith’s work, you can understand why patience is a virtue. His detail is remarkable, and his sense of light and shadow are mesmerizingly accurate. Smith’s paintings are so detailed they could almost be mistaken for nature photographs. His rendering of snow is particularly strong, especially considering snow’s complex qualities—its crystalline structure, snow has to have mass yet also look light and crunchy, and its white color can create highlights that

are difficult to paint around. Snow works in the new show include Lynx on the Verge, featuring a small cat plowing through fluffy banks of fresh snow, and Trailblazing, an action scene of wolf leaping through soft powder. “When I first started painting snow, it was intimidating. My dad could do it so well, as well as water. I just kept at it. And now each time I’m doing it differently, and better,” he says. “I can see my work evolving as I paint it more and more. Now it’s not so difficult and I can see all the subtleties better.”

Other works available at the Trailside show include Into the Deep, depicting a bear swimming through a stream colored by the sky’s hazy reflection, and Big Sky Country, which shows several bison underneath an expanse of clouds. “With Big Sky Country, my reference was mostly Yellowstone, but it can be Montana, where I live. It reminds me of home,” he says of the simple composition with its three central bison standing in poetic majesty on top of a slight ridge. “My subject matter is usually more close up, but this one was fun to do, particularly because of the cloudscape, which I really enjoyed painting.” Smith, who’s also an accomplished guitarist, says he’s enjoying each new adventure that comes his way, and adds that he feels like he’s hitting his stride with Western art. “But I never stop learning,” he says. “I scrutinize the heck out of my paintings, so I know there is always something that can be improved and I look forward to learning more…A lot of people talk about retirement, but I don’t ever want to retire. I hope I can do this for the rest of my life.” Fo r a d i re c t l i n k to t he e x h i b it i n g g a l l e r y g o to w w w. we ste r n a r tc o l l e c to r. c o m