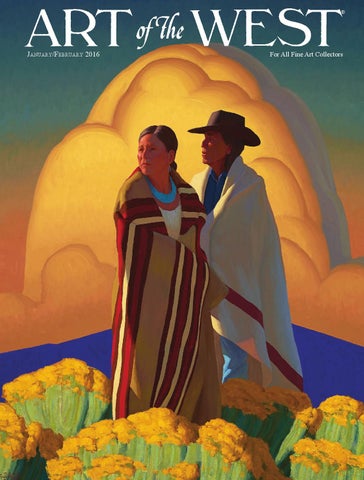 Answering the Call of the Open Road By Vicki Stavig

s a landscape painter, you want to kind of get your arms around the planet.” So says Andrew Peters, who has made a valiant attempt to do just that, traveling far and wide to see and capture magnificent and varied landscapes. When he was just 25—three years after winning the Iowa Duck Stamp Competition—he packed up and headed to Africa, where he spent a year painting game animals and indigenous peoples. He’s also painted throughout North and South America, as well as in Romania, Morocco, Spain, Italy, France and Ireland and has plans to visit and paint in Slovenia. And he’s lived in several states, including New Mexico, Colorado, Wyoming, and Arizona. Eight years ago, however, Peters returned to his home state of Iowa, and today lives not far from his childhood home in Council Bluffs. It was, he says, a move that had more to do with his life than his art. “I had sacrificed much in the way of family and friends by developing my art career,” he says. “One of the things I learned is that you cannot forsake society for scenery. There are people here I belong to, and I reached a point where that was really talking to me. In order to be a landscape painter, I had to run away from home.” But he’s back now, and happily so, living on 20 acres on which he has created seven wetlands that attract all manner of wildlife. “A stream runs through it, and I’ve added lots of trees and shrubs that add a lot of autumn color, so it is a 9,000-square-foot canvas that I can walk around in,” he says. “It’s like painting with a tractor and a shovel.” Growing up in Iowa, Peters developed an affinity for wildlife and nature, as he hunted and fished with his father and brother. While the outdoors fostered his love of nature, a visit to the Joslyn Art Museum in Omaha, Nebraska, where he was mesmerized by the work of Karl Bodmer, ignited his interest in art. So it was that at the tender age of 5, Peters began to take art classes at the museum, followed by private lessons until he graduated from high school. Add to that his fascination with the John James Audubon prints his father brought home and a summer job, when he was 15, as a naturalist assistant at the Fontenelle Forest Nature Center, and it wasn’t surprising that Peters eventually would paint and that his subject would be wildlife and birds. He earned his first major recognition for that work just three weeks after earning his degree in wildlife biology from Iowa State College. Winning the Iowa Duck Stamp Competition when he was 22 was quite a coup, enough so that he decided to make fine art his career. He had traveled and painted birds while in college and then made that trip to Africa, but came to realize that he was limiting himself by focusing on wildlife. So Peters made a decision. Well, actually, he made three decisions—all, he says, in one day. He decided to move to Santa Fe, New Mexico; to move from watercolors to oils; and to move from birds to landscapes. In doing so, he also graduated from a regional market to a national market. One of the reasons for the move to Santa Fe, he says, was that many of the early winners of the Prix de West were living there. “I admired every one of those painters and how they paint, and that was what I wanted to accomplish,” Peters says. 30

A Bend in the River, oil, 24˝ by 30˝ “In rural Utah last March, I explored broad mountain valleys in bright spring sunlight. The landscape seemed bursting awake on those warm radiant days. The sketch for this painting seemed to paint itself, so heady was the inspiration.”

He also admired works by members of the Taos Society and the California Plein Aire Painters and was fascinated by their painting process. “When you saw photos of those artists, their easels were outdoors,” he says. “I thought, ‘OK; that’s really what I’ve always wanted to do.” And do it he did. Peters began to paint outdoors, working as a waiter to pay his expenses, while he per-

fected his plein aire painting techniques. “I would take my French easel, drive around northern New Mexico, set it up, and paint,” he says. “It was a long, slow process, but I could see improvements. It was dogged determination on my part.” Three years later, Peter’s paintings were attracting collectors throughout the region and evoking strong reactions. “One day a gallery hung

one of my paintings in the window and someone came down the sidewalk, stopped cold, went into the gallery and said, ‘I want to buy that painting,’” he says. While the sale was nice, it was the buyer’s reaction that meant everything to Peters. “I want to create that bridge between my art and people,” he says. “It’s my way of sharing nature.”

During the next 10 years, Peters exhibited and sold his work, then applied to show at the prestigious Prix de West Show. “I applied every year for 10 years before I was accepted,” he says. “I asked myself, ‘Andy, how long is this going to take? Oh, 10 years but, if not, I will keep applying.’” Fast forward to 2015. Peters has been participating in the Prix de West for nine years and this year 32

was special. He won the 2015 Prix de West Purchase Award for his painting, The Lake of Glass. “It was the most extraordinary feeling; it was overwhelming,” he says. “It was a great shock—in a good way. That award rocked my world.” Admitting that glacier lakes hold a special appeal for him, Peters says they are the ultimate symbol of the remains of old glaciers and wilderness, and they are endangered. “I

want to preserve them in a painting,” he says. “A painting is much different than a photo; it is processed through human temperament. Photos don’t capture the drama, the shear scale of the scene you capture at the top of the ridge. I want to convey a very true representation of the scene. It’s not exaggerated, it’s not embellished, it’s not romanticized. It has to be a true state.” The most difficult part of painting

Twilight Fanfare, oil, 30˝ by 36˝ “There is a moment of fleeting sunlight at the end of the day that I have tried to capture truly in a number of paintings. It builds toward sunset and then is gone suddenly. It is the outdoor painter’s greatest challenge and a real thrill, when you feel you have captured the effect convincingly.”

The Lake of Glass, oil, 30˝ by 40˝ “The Lake of Glass lies cradled beneath Taylor Glacier in Rocky Mountain National Park. By painting a careful sketch onsite I strive to capture the impressive scale and varied moods. Precious are these intimate hours in an ice age wilderness.”

such a scene, Peters continues, is “trying to get your heart rate under control. It’s a heart-pounding experience, when you top out and see this gorgeous thing. I’ll take it in for an hour before I set up my easel. Once the complex drawing is underway, I’ll be there for one or two hours, and the light and weather changes, and I see several distinct moods. I try to capture the one that appeals to me most. I also take photos. They provide a quantity, not quality, of information.” Asked what types of scenes inspire him, Peters responds, “What I seek, when I’m looking for my next painting, is a harmony of palette, texture, and composition—and by that I mean distance. It has to be exciting and beautiful, as well. I don’t have a preconception about what I hope to see but keep an open heart and mind about what chooses me along the way.” As he travel and paints, Peters’ goal remains the same: to convey, in an aesthetically pleasing manner, the importance of our natural world. Like Audubon and Bodmer, he is captivated by the beauty of the wilderness and is committed to, in his own way, preserving and sharing that beauty. Doing so not only requires an immense amount of skill, combined with a love of the land that is almost palpable, it means Peters must keep moving, pursuing his quest to see what’s beyond the next hill. To that end, each year he takes a week-long pack trip with fellow artist Tucker Smith into the Wind River area of Wyoming and a month-long trip to another country where, he says, “I’ll look around the country, the culture, the architecture and come out with maybe a dozen paintings. If I arrange them in a show and sell most of them, I have funded my next trip.” When traveling to other countries, Peters says he books the cheapest flight he can January/February 2016 • ART of the WEST 33

Teton Fall, oil, 24˝ by 30˝ “Early in my career I painted wildlife subjects exclusively. Then I found landscape painting allowed me to travel more widely and paint nature scenes while in nature. Now and then I animate a large landscape with creatures I have seen in that place.” The Old Coast Road, oil, 24˝ by 36˝ “This magazine introduced me to the early California plein air painters three decades ago. Their keenly observed sun-drenched landscape paintings have been a constant inspiration through the years. Here, the Santa Ynez Valley in winter is Old California extrant and an homage to those artists.”

John Muir Wilderness, oil, 30˝by 36˝ “To reach this alpine lake high in the Sierra back country takes a saddle horse or a vigorous hike. Painting an oil sketch onsite is my way to capture the mood and enormity of scale. A wilderness painting is a kind of courtship with a place that you always remember with longing and affection.”

find, rents a car, learns some key phrases, studies the geography, and then “I just follow wherever the roads take me. I’m a guest in that country, so I move very quietly and respectfully among the people.” And he paints, paints, paints, saying, “Even the clumsiest painting is a postcard, a memory.” Peters does admit that, on occasion, he might have to adjust the mood of a painting to give it artistic integrity. “What governs the process of what I do are art and nature, but art and nature do not always see eye to eye,” he says. “A good composition in nature might not agree with art. When painting outdoors, Mother Nature always wins; you paint what is there. In the studio, art wins; you adjust to make a better painting.” It’s been quite a year for Peters. In fact, it’s been quite a life. He has worked hard, made the changes he felt needed to be made, both professionally and personally, and today is happily at home in Iowa—well, at least for the moment. Vicki Stavig is editor of Art of the West. January/February 2016 • ART of the WEST 35