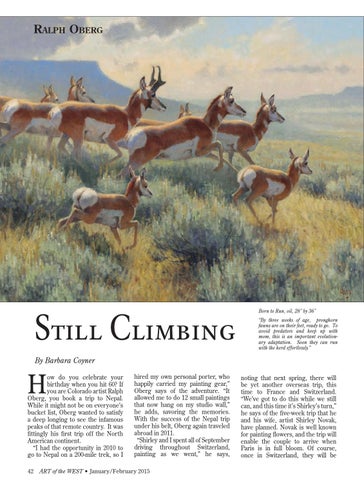 Born to Run, oil, 28˝ by 36˝ “By three weeks of age, pronghorn fawns are on their feet, ready to go. To avoid predators and keep up with mom, this is an important evolutionary adaptation. Soon they can run with the herd effortlessly.”

All Fired Up, oil, 30˝ by 40˝ “I found this setting high in Yellowstone Park one fall, when the air was thick with smoke from distant forest fires, as it often has been lately. The fiery flame of the burning undergrowth added to the idea of a bull in full testosterone intensity and ‘all fired up.’”

back in the mountains, checking out  the Alps and the resident wildlife.   “Still  climbing”  seems  to  be  Oberg’s  anthem  in  life.  He’s  not  only  climbed  lofty  peaks,  but  he’s  managed to paint them as well. “My  first  love  has  always  been  the  high  Rocky Mountain wildernesses; high  altitude is where I feel the freedom  and bliss of just being alive,” says the  artist, who at 64 recently completed  a  seven-day,  six-night  backpacking  trip  into  the  Needle  Mountains  of  Southern  Colorado.  Noted  as  the  most  remote  and  rugged  peaks  in

Colorado, they include three mountains over 14,000 feet high, and dozens more at over 13,000 feet.   “This  ‘Thread  the  Needles’  route  has  been  on  my  bucket  list  ever  since  my  twenties,  when  weather  forced  me  to  abandon  the  route,”  Oberg says. “I am proud that I managed to complete it with a 40-pound  pack  and  two  younger,  stronger  friends to help.” Oberg’s  lifelong  love  of  the  outdoors, its wildlife, and the mountains  means he’s always on the lookout for  mood and solitude, as he paints plein  air, or sketches for later work in the  studio.  “I love being outside in the  world under the sky and looking for  the  elements  that  will  stimulate  a  possible  painting  idea,”  he  says.  “A  good day in the field can come in any  season  and  in  most  any  weather  or

place.  Success  with  a  sketch  is  the  first  criteria  of  a  good  day.  I  have  painted in blizzards, until the palette  is so full of snowflakes I can’t find my  colors, which of course don’t stick to  the panel anyway.”  Admitting  that  he’s  slowed  down  his pace a bit, Oberg says, “A pleasant day, with slow moving clouds and  a  few  friends  around  is  the  happy  norm more now.  I have always loved  the  Mountain  West,  but  I  can  enjoy  the desert and seacoast just as much.   But I’m not as tough as I used to be.” Sprinkling in a fair amount of selfdeprecating humor, it’s apparent that  Oberg  is  still  tough—on  himself.  As he reflects back on his twenties,  bumming around in his Volkswagen,  or  strapping  on  a  backpack  to  hike  the  Rockies  or  Alaska,  he  concedes  that he didn’t take art, or making any

Moonlight Serenade, oil, 38˝ by 36˝ “The song of the coyote was once considered emblematic of the West alone. Today the wily canine has extended its range to include virtually the entire nation. Where there are people, there are mice and other leavings that provide easy pickings for this master of survival. When hearing their harmonious duets, or group choruses, just after sundown, one can imagine there are meanings to their communications. Perhaps they are joyfully singing just to hear themselves sing.”

kind of living, very seriously. Always  noted for his art abilities, his parents  had  supported  his  talent  in  childhood, and his Aunt Glenna had shuttled  him  around  to  museums  and  galleries, when he reached his teens.  For  the  family,  it  seemed  a  done  deal  that  Ralph  would  graduate  from  high  school,  major  in  art  in  college,  and  go  on  to  become  an  artist. Predictably, he did get an art

scholarship  and  spent  two  years  at  Colorado State University, but he felt  his interest in more representational  art,  landscapes,  and  wildlife  paintings were getting short shrift in the  new age of modernism.  Oberg  dropped  out  of  college,  but  then  gave  formal  education  another try, this time at the Seible  School  of  Drafting  in  Denver  in  1971.  An  architectural  firm  gave

Sublime Colorado, oil, 24˝ by 28˝ “Colorado is my home and has been for the vast majority of my life. I imprinted on its high, rugged peaks as a boy and am still enthralled by their everchanging beauty. This classic view over Piney Lake is a favorite. In my younger days, I was usually up in the rocks near the tops instead of just enjoying them comfortably from below.”

oils proved to be his real calling. Success was not instant, and again  Oberg’s  self-deprecating  humor  shines through, as he recounts getting serious about painting for a living  when  he  was  in  his  thirties.  “I  used to brag that I was a self-taught  artist, until I realized I had an ignorant teacher,” he says with a laugh,  grimacing  at  some  of  his  earlier  works.  Yet  Oberg  knows  that  his  paintings  have  improved,  especially

after  he  enrolled  in  his  first  workshop in Scottsdale, Arizona, studying  under Wayne Wolfe, who remains a  dear friend and mentor.   “I also met Matt Smith during that  workshop,  and  we’ve  been  running  in double harness ever since,” Oberg  says. “Through the years, we’ve traveled  together  and  painted  together.  We  both  started  out  penniless  and  were learning at the same time.” Oberg  became  relentless  in  his

training  and  says  one  aspect  that  helped his art was learning the skill  of  self-criticism,  something  taught  by  Wolfe  and  nurtured  by  peers,  who included Smith, Clyde Aspevig,  and  Len  Chmiel.  “I  learned  how  to  analyze  why  a  painting  didn’t  work  and how to fix it,” he explains, noting  that, once he started to teach workshops himself, he tried to convey the  same skill to his students. “In learning the elements of design, you see

how eyes look at a painting.”  Because Oberg’s father had been  a  naturally  gifted  teacher,  Oberg  modeled his teaching style after his  father’s,  noting  that  his  approach  features gentle criticism mixed with  praise. “You have to give a little sugar  with  the  spice,”  he  says,  acknowledging  that  he  no  longer  teaches,  but instead focuses solely on his own  work these days. Achieving  a  respectable  niche  in  the  Western  art  world,  Oberg  has  stayed with oils since the late 1970s,  refining the way he works with them.  He remains partial to oils because of  their workability, their richness and

their  flexibility.  A  great  fan  of  John  Singer  Sargent,  he  says  Sargent  constantly refined the techniques in  his paintings, until his brushstrokes  and expression looked effortless. “I  started out with dry brush watercolors, when I was young,” Oberg says.  “I was just a renderer, being true to  a  photo.”  Moving  beyond  copying  photos  meant  pulling  feelings  and  interpretation  into  his  work.  Here  Oberg  benefited  from  the  workshops,  but  also  grew  just  by  going  out  and  being  in  nature,  where  he  could see what he was after in terms  of  subject  matter  before  he  ever  touched the canvas.

Ice Fall, oil, 42˝ by 42˝ “While in the Bernese Alps, I had the chance to hike up to the Fiescherhorn Glacier in the canyon above Grindelwald and just east of the Eiger. I carried my paints on this six-mile day hike and did a 12” by 10” plein air study of this little meltwater fall coming down beside the remnant icefall, formed when a glacier moves over a steep cliff and breaks up into seracs. All the world’s glaciers are melting extremely fast. I have been in Alaska, Canada, the Himalayas, and the Alps and seen clear evidence of rapid ice melt that has occurred during our lifetimes. Historic photos show the changes very dramatically. This piece is my visual warning about global warming.” This painting won the Best of Show - Painting at the 2014 CAC Gold Medal Show.

Silence, oil, 24˝ by 48˝ “This scene fascinated me for years, as I often drove by it on the upper Gallatin River, when I lived in Montana. One winter, I stopped during a snowstorm and stood there blissfully in the cold, listening to the absolute silence of snow slowly falling. The soft gurgle of the stream was so natural it failed to register as sound. Of course, being pretty deaf helps, too.”

“I  think  my  colors  have  gotten  more  harmonious  and  more  accurate,”  Oberg  says  of  his  current  work, which centers largely on wildlife and landscape. “I’m still fairly literal. I do take liberties, but they are  fairly  subtle.  I  love  working  with  a  scene the way it is, but the beauty of  painting is that you can make something better by manipulating it.” Beyond his passion for the mountains  and  painting,  Oberg  finds  much  of  his  joy  in  being  married  to  Shirley,  whom  he  met  in  1996  at  a  Scottsdale  painting  workshop  and married a couple of years later.  Novak  came  late  into  her  painting  career,  but  the  junction  point  at  which  she  joined  with  Oberg  proved  nourishing  for  them  both.  Their  rural  home,  five  miles  outside  Montrose,  Colorado,  features  two  studios,  so  they  remain  free  to  create their own works in their own  work  styles.  Shirley  admits  that  much of the home rhythm revolves

Ralph and Grandson Hunter in Alaska

around  who  is  painting  and  who  is  finishing a piece. While the two do critique each other’s  work,  Oberg  admits  that  such  discussions  are  handled  “verrrry  carefully.”  In  good  natured  fun,  he  opines  that  “Shirley  uses  every  red  in the palette” to paint her carefully  cultivated poppies.  When  the  two  take  a  break  from  their  easels,  they  spend  considerable  time  together,  tending  the  flower  gardens  that  Shirley  prizes.  “The garden keeps us both healthy. I

am the unskilled labor in the venture  and have to be directed,” Oberg says  with  a  laugh,  emphasizing  that  his  wife’s constant support and sense of  fun have been a true game changer  for him. “I’ve never been happier in  my life,” he says. “Shirley has given  me  the  true  freedom  to  pursue  my  dreams,  and  I  am  extremely  fortunate to do what I want to do.”  Barbara Coyner is a writer living in Potlatch, Idaho.