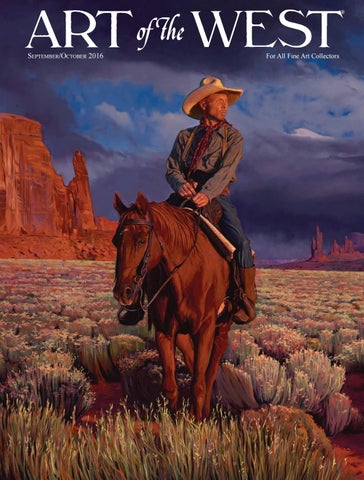 ark Maggiori fell in love with the American West when he was a 15-year-old on vacation with his uncle and cousin. It was so different from his home in Paris, France, that he couldn’t help but be charmed by the wideopen spaces, the rugged terrain, and the hard-working cowboys. But when he returned to France, his attention quickly returned to his skateboard and his studies, and the romance of the West was forgotten. Almost 20 years later, Maggiori found himself at the National Cowboy and Western Heritage Museum in Oklahoma City, Oklahoma. By then, he had finished his formal art training at the Academie Julliard in Paris, spent 10 years fronting a nu metal band called Above - A Rocky Slope, oil, 30˝ by 34˝ Pleymo, tried his hand as a photographer, and was living in Los Angeles, “This painting was me trying to be more graphic with the character designs. I’ve been inspired by California. But he had never seen true Western art firsthand. Winsor McKay for a long time, and I realize that, “So I’m at the Heritage Museum and I discover Frederic Remington,” when I sketch cowboys in pencil, you can see some Maggiori remembers. “I had no idea! In France, we don’t have Western art. of his influence. But, when I paint, it disappears, It just struck me, when I saw it, that I knew what I wanted to paint. I hadn’t because my style is realistic. In this painting I tried to give the cowboy a more designed aspect.” found the subject matter that fit me until then.” Maggiori knew then that it was time to shift gears to fine art and start paint- Opposite Page - The Family Tradition, ing. In 2014, he and his wife Petecia Lefawnhawk moved from Los Angeles to oil, 30˝ by 24˝ her mother’s home in Chloride, Arizona, so he could work on his art full-time. “After coming back from the Briscoe Night of Art“I knew I wouldn’t make any money for a while,” Maggiori says. ists Show in Texas, where I met some ranchers’ But four months later, in February 2015, Maggiori sold his first few paint- families that have been ranching for generations, ings to a gallery in Los Angeles. “That was my first check,” he says. “I was I thought I would make a painting showing that passing of generations, the time where the old man so broke by then, when I took it to the bank and put it in, I was like, ‘Yea!’” is trying to pass the legacy to his son.” Before the end of the year, he and Petecia were back in Los Angeles, where 36

Night Fall Over the Little Colorado, oil, 36˝ by 36˝ “The idea here was to make the viewer experience what it feels like to be up on that canyon rim. This place is located west of the Grand Canyon. The river that runs down is part of the Colorado River, but they call it Little Colorado. Being up there feels like you are getting sucked in and are going to fall. You get quite an adrenaline rush just by standing there.”

they are still based today. Although moving into their own home in the city was certainly a sign of success—and was convenient for Petecia’s job in the fashion industry—Maggiori is looking forward to settling somewhere a little less crazy in the near future. “My heart is in Arizona for sure,” he says. “We will get out of Los Angeles at some point—it’s just so crazy here! We’ll have to find a happy middle between the city and the wilderness.” If it seems like things happened quickly for Maggiori, consider that, by the time he graduated from high school, the only real drawings he had ever done were on the covers on his notebooks. His passions at the time were skateboarding and music, but he was so creative that his uncle encouraged him to enter the Académie Julian, an art school in Paris where Henri Matisse, Marcel Duchamp, and John Singer Sargent had studied. That’s where Maggiori realized how much he loved to draw. “I really got into it then,” he says. “But it was pretty hard—I was already 19, and most of the other kids already knew quite a lot and were really good. I had to catch up to them.” 38

By the time he finished his studies, Maggiori was 23 and eager to begin a career in animation. He was lucky enough to secure an internship with the Disney studio in Paris, with the intention of moving to America to work for the company sometime in the future. But, as he was gaining the experience he needed to make that happen, his band signed a contract with Sony to make an album. “I pretty much dropped the idea of working for Disney when that happened,” Maggiori admits. “I spent the next 10 years doing music instead—and I wasn’t painting at all during that time.” He also started directing music videos, which prompted several trips to Los Angeles for shoots. On one of those trips, a friend recommended

that he contact a young woman named Petecia to be in a video. The two quickly became good friends and eventually, when Maggiori’s first marriage ended and he moved to the United States in 2011, Petecia became his wife. It was while the couple was visiting Petecia’s father in Oklahoma City that Maggiori first saw Remington’s work and realized he had found his calling. Shortly thereafter, they moved to Arizona, and he started to paint. As he finished each painting, Maggiori posted pictures of them on Instagram—which he credits as the catalyst for his early success. A friend in Los Angeles saw those photos and connected Maggiori with Western artist Logan Maxwell Hagege, who arranged a meeting for him with representatives of a wellknown gallery. The gallery immediately purchased both of the paintings Maggiori had brought with him and continues to represent him today.

Enjoying a Moment of Rest, oil, 30˝ by 40˝ “Monument Valley is the only place on earth where I have experienced absolute silence. I was painting and suddenly felt a pressure in the air, and some kind of void took over. For about five seconds, there was not a sound, and I felt like I was on the other side. I wanted to express that in this painting.”

Hagege, meanwhile, quickly became a good friend and mentor to Maggiori. “Logan has such a high reputation as an artist,” Maggiori says. “He’s been so good to me. He took me under his wing and really mentored me. He has helped me quite a bit.” Before moving to America, Maggiori knew nothing about cowboys and readily admits he is still in the learning process. But, when he started watching them work and talking to them at rodeos and on ranches, he became fascinated with their lifestyle. “I just thought that they were pretty amazing,” he says. But his own experience with horses, Maggiori admits, has been fairly limited. “I’ve only been riding a couple of times,” he says. “Usually, if I’m around cowboys, it’s to shoot photos of them, not to be on a horse with them. I did spend two days riding in New Mexico recently—but I’m still such a bad rider. I need to get better.” Maggiori’s priority, however, is to first get better as a painter. He recognizes that he doesn’t know the subject matter as intuitively as some of his colleagues, and he’s working on improving his understanding of cowboy gear and equipment. “Sometimes people send me messages on Facebook saying, ‘Dude, that bridle was wrong!’” he says. “So many people have so much very specific knowledge, it’s amazing. I’m trying to catch up and learn all of it.” In Paris, Maggiori’s artwork had been much looser and more impressionistic, as he painted street scenes and portraits with big brushes. When he September/October 2016 • ART of the WEST

Above - Inseparable, oil, 20.5˝ by 28˝ “Cowboys and horses are inseparable. Deep in the wilderness, they are always together, and around them the immensity of the sky and the clouds is dancing constantly.” Opposite Page - The Moon Follower, oil, 30˝ by 24˝ “I’ve had a fascination for nocturne scenes since I discovered Frank Tenney Johnson paintings. At that time I was living in Arizona and realized that night time in the desert can actually be really bright, when the moon is glowing strong. My idea for this painting was to imagine a cowboy riding at night and following the moonlight, heading to the bottom of that canyon facing him in the total silence of the wilderness.”

started painting cowboys and Western landscapes, however, he found himself drawn to the details instead. “Every time I start a painting, I tell myself that I’m going to try to be looser this time,” he says. “But then I’ll get started, and suddenly I’ll find myself grabbing a small brush and doing the detail again.” Maggiori’s goal is to create a timeless piece of art, regardless of what’s in it, but he understands why people are quick to notice elements that are out of sync. He was once told, for example, that the saddle in a particular painting would never have been used at the same time as the hat the cowboy was wearing. “I understand that now,” he says. “I am working hard to be as precise as possible in the future. I will keep getting better at that, because they are right—I do have to be careful about that.” The challenge, Maggiori concedes, is finding time to immerse himself in the study of his subject. “When I finish one painting, I start another,” he says. “Right now, I’m trying to keep it simple in my paintings, but I want to be able to do more, to add more figures and more diversity.” 40

Maggiori is hoping to work on some historical pieces in the near future, for example. “You always have to seek a balance between what you want to do and what the galleries are looking for, what people want to buy,” he says. “But there is just so much that I want to be able to do—sometimes it’s overwhelming.” Considering that he’s only been painting full-time since 2014, the amount of work Maggiori already has produced and sold is rather overwhelming as well. That’s why, when he traveled back to France to spend a month with his two daughters in June, he intentionally left all of his art supplies behind. He had rented a house near the Mediterranean Sea in the south of France and was looking forward to a much-needed break from work. “I didn’t even pack any brushes,” he says. “I think it’s important to take a break, after how much I’ve been painting the last few years.” 42

Cowboys at Work, oil, 36˝ by 36˝ “The idea here was to show the beauty of the environment where cowboys are working. In this painting, you see two cowboys bending over to put a halter on a bull that had run off and to lead him back to the trailer.”

Sara Gilbert Frederick is a writer living in Mankato, Minnesota.