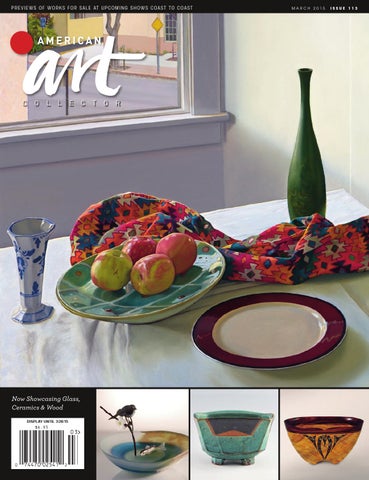 ptics is a branch of physics focusing on the behaviors and properties of light, something Qiang Huang has spent a lot of time studying. Huang, who born in Beijing, China, came to America in 1985, and in 1993, he obtained a Ph.D. from the University of Alabama in physics and light, specifically optics. He then began a career as an optical engineer. That training and background continues to influence how Huang approaches each of his paintings. The artist approaches the canvas with a scientific problem-solving mindset. He “troubleshoots” how he wants his idea to show on the canvas or how he wants to

enhance the effects. “The general idea of appearance or style is that I like to keep it relatively low key. I like it to be darker and gray in the darker areas, and then provide enough light around the center. The light itself is the focus of my still lifes,” he explains, discussing his painting Life and Time. The artist uses thicker painting on the focus, with more saturated colors that are more “eye-catching” to capture people’s attention. “The background will not be as vibrant, but will enhance the center of focus. They will enhance the brightness around the focus, and contrast between

light and dark.” Not all Huang’s paintings use this same method−in fact, some are the opposite. “I don’t want to do everything the same. [Shower in Cool Light] is what I consider mid-key to high-key. It is a reversed situation, with the background being light, and the color is the eye catcher instead of the light,” he says, adding that the light in front creates a dramatic effect, especially with the spotlight and the dark bottle supporting the effect. “I want to enhance the center of the focus and to show the atmosphere…That creates a dramatic effect, which is what I like to show in my still lifes.”

Huang has not always done still lifes. When he started his art career 17 years ago, while still working as a full-time engineer, he painted the figure and portraits, and thought still lifes “were kind of boring. I didn’t want to do them.” After deciding he didn’t have the formal training to capture the subtleties of the human anatomy, he decided to revisit still lifes. He trained with artists David Leffel and Sherrie McGraw, among others. “They gave me motivation, and I started to paint the light, not the image,” he says. Even now, viewers can see their influence in his compositions, as he introduces more abstracts into his paintings. Huang doesn’t want the work to look like a photograph, but he does want a recognizable object. Then, he can “elaborate it and add dramatic effects.” Not having a professional art education, Huang says he has to work harder to “catch up.” He still loves to paint figuratives, landscapes and cityscapes, and would like to paint more so he can “go into the realm of culture.” Huang will have his first solo show outside of Texas with Trailside Galleries in Scottsdale, Arizona, from March 2 to 15.