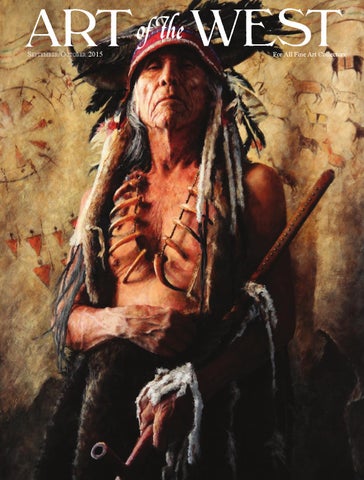 n early July, recently home from a trip to Ireland, Michael Godfrey was excited about the landscape he saw there, some of which he sketched on his new Galaxy tablet and will later transform into completed pieces in his home studio. That trip, he says, had long been on his bucket list and became a reality, when Godfrey’s wife Kim arranged the adventure. 60

“It was everything I expected and more,” he says. “I think we’ll go back. I identified the areas I want to concentrate on, like the Ring of Kerry, the Dingle Peninsula, dramatic cliffs, old ruins, and castles.” Godfrey and Kim also have taken painting trips to Germany, Switzerland, and France, but it is the American West that really inspires this talented artist. “There are many

ART of the WEST • September/October 2015

beautiful places around the world, but there is so much I love about this country,” he says. “We travel to paint three or four times a year and go to Colorado, California, and Wyoming. We’ve been to every state in the country but two.” Scenes from his painting excursions have earned Godfrey several awards, including the 2007 Eiteljorg Museum Quest for the West Palette

Early Morning, Lake Summer, oil, 24˝ by 48˝ “I find the quiet, gentle landscapes of the Chesapeake to be a counterweight to what I look for in Western landscapes. This is a wildlife refuge that I paint often.”

Award and, in 2010, Best in Show at the American Art Invitational in Denver, Colorado, and Best in Show at the Rocky Mountain Plein Air Painters show. While those awards are greatly appreciated, they are not the driving force behind his desire— almost a need, really—to seek out and paint landscapes that he simply must share with others. Godfrey has been fascinated by the great outdoors since he was a young boy. “I was born in Germany and was an Army brat,” he says, adding that, when his father was transferred back to the States, they moved around a bit but eventually

landed in North Carolina. “I grew up in the woods, playing exploring, fishing, and hunting. I think that’s where my love of the land comes from.” Godfrey’s love of art also was apparent early on and, when he was 12, his father enrolled him in private painting lessons and, naturally, landscapes were the focus of his work. “I have the very first thing I painted, a 16” by 20” painting of Bear Lake National Park that I did from a photo in an encyclopedia,” he says. “A friend kept it and gave it back to me years later. He said he thought I would throw it away, if I had kept it. Looking back at it, I can still remem-

ber the sense of discovery. I can see where I came from. All the elements are there, just in a cruder fashion. I look at it and can see I was attempting to understand. I can see potential.” The friend who had held on to that first painting, until he returned it to Godfrey in the mid-Nineties, ran a local gallery and began to sell Godfrey’s paintings, when the young artist was just 13. “His wife was a teacher at my elementary school and said, ‘I think my husband might want so sell some of your paintings,” Godfrey says. “I took them in, and he started selling them. This was in the early Seventies, and my paintings were selling for about $300.” Godfrey continued to paint while attending East Carolina University in Greenville, North Carolina, where he majored in graphic design and minored in painting. While there, he met Kim, who was an auditory pathology major. “She was sweet, kind, intellectual, quiet, a good Christian girl, and pretty as all getout,” he says. “She later got an MBA, and we married in 1985. She’s been managing me since 1994.” After earning his degree, Godfrey work in commercial art for several years, then accepted a position with the University of Maryland, where he did graphic design work for promotional materials for 15 years. During that time, he also continued to paint and to sell his work through galleries. Like most illustrators and designers who later turn to fine art, he says commercial art had a definite impact on his fine art. “I look at the canvas as a design problem, initially,” he says. “I’m not adverse to cropping. If I see a better painting within a painting, I will crop it in a heartbeat. Working with deadlines also helped in fine art, and the business side has really helped.” In 1990, Godfrey entered the Art for the Parks competition and traveled to Jackson, Wyoming, for the event. “I was a little overwhelmed with it all,” he says. “I fell in love with the bold, sweeping mountains and vistas.” Up until then, he had been painting the creeks and mountains in the East, but the West quickly became a focus of his work. Kim had been encouraging Godfrey to paint full-time for several years, but it wasn’t until 2000,

September/October 2015• ART of the WEST

when sales of his work were strong enough for him to support his family, which included three daughters, that he left commercial art behind. It was, in essence, a dream come true. He was now free to roam the land at will and often, armed with his paints and 5” by 7” or 6” by 6” panels, would do quick sketches for ideas and color, then head back to his home studio and work on larger renditions of those scenes. Ever since Godfrey first picked up a brush, landscape has been his driving force, his reason for painting. “I’m so impressed with what God does with light and landscape,” he says. “I love fall, spring, and winter equally the same. And I like evening and early morning—the low angle of the light and the shadows have a more evocative look then.” Snow also appeals to Godfrey, who lives in Maryland, near the Chesapeake Bay. “I look forward to fresh snowfall. Our snowfalls in the East tend to be wet and sticky. Whenever it snows, I go to a nearby 62

wooded pond area to see what treasures are exposed by the blanket of snow. Snowfall reveals the underlying structure, reflects light, and presents many possibilities for painting compositions.” If there is one element of a landscape—or a cityscape, or a floral piece, for that matter—that inspires Godfrey more than any other, it is the light. “The first thing I look for in any scene is the light, even in the city,” he says. “I think all artists are chasing light. I am mostly interested in the way light defines form. In a painting, the artist suspends in time a fleeting moment that allows our senses to be played repeatedly. There are fleeting moments that happen only for minutes, and then they are gone. Our lives become richer and more meaningful through our visual sense. These moments resonate deeply in my soul. I am affected physically by what I see. Sometimes I observe sunlight on a scene that makes goose bumps break out. How do you capture that in paint? It’s

ART of the WEST • September/October 2015

probably an age-old question. “I paint the things and places that speak to me. My intent is to create paintings that are beautiful and harmonic, and I hope that shows in my work. When I go to a locale, I am always looking for the same thing: how light interacts with the environment. That inspires, me. I spend lots of time studying how the scene reflects the quality of the light. What is the sky’s color? How does it affect the land or water? Is there moisture in the air? How does that affect the visibility?” Above - A Touch of Moonlight, oil, 24˝ by 36˝ “I’ve started to study and paint nocturnal scenes. On this particular winter night, the moon lit the land in a most beautiful way.” Opposite Page - High Ridge Trail, oil, 24˝ by 18˝ “Whenever I travel to the West, I try to include a hike to an alpine lake. In Maryland, living at an elevation of 150 feet above sea level doesn’t quite prepare one for alpine elevations. I love the views of distant valleys and ridges, so it is well worth the effort.”

Above - A Verdant Light, oil, 24˝ by 48˝ “This is a painting from the Big Sur area of California. Big Sur is called ‘the most beautiful meeting of land and sea’ for good reason, for it has dramatic views, coastal mountains, rocky coasts, and crashing waves. In this painting, I focused on the power and beauty of a crashing wave and the quality of light. The challenge of painting this scene is understanding the rhythms of the waves against rocks and how the light interacts with the surfaces of water, rocks, and air.” Opposite Page - Winter Garment, oil, 40˝ by 30˝ “I am intrigued by the reflective qualities of snow. I went to a woodland area, after a night’s snowfall, to see what abstract treasures were created by the storm. In this case, the storm had left behind a windless morning and much of the snow still clung to everything, creating many possibilities.”

Early on, Godfrey painted in watercolors and acrylics but, when he found that he was working watercolors so hard that they looked like oils, he decided to use oils exclusively. “With oils,” he says, “I can scrape it off, or paint over it, so I’m not fighting the medium. I paint in little bits of color. I dab a lot; I glaze. My studio work is more a glazing, a building up of paints, than direct paint.” Godfrey describes his style as a combination of realism and impressionism because, he says, “that’s the way I see.” A landscape painter, he adds, must be knowledgeable in many disciplines—including geology, architecture, chemistry, and physics—in order to understand what he is seeing and then to interpret it. Godfrey is ceaseless in his efforts to create paintings that have a good design, an interesting lighting situation, and paint that is applied with a variation of textures and smoothness. “I want my paintings to reflect what God has already done,” he says. “I want to express the beauty and wonder I see and feel every day. There is much that is beautiful in this world, and I think that art, my art, should lift the spirit of the viewer. Artists have a choice as to what they create. I want the work of my hands to glorify God and cause people to think of the beauty of this wondrous creation.” Although he has lived in Maryland for many years, Godfrey is drawn to the West. “The appeal of the West is its drama,” he says. “It’s big. You don’t have that big sky in the East; there’s always a tree, a building, or a person in the way. In the West, you can see the sky, the stars.” The obvious next question is this: Why doesn’t Godfrey simply move out West? He doesn’t hesitate before responding. “It’s like eating ice cream; if I ate it all the time, I wouldn’t appreciate it as much.” Vicki Stavig is editor of Art of the West. September/October 2015• ART of the WEST