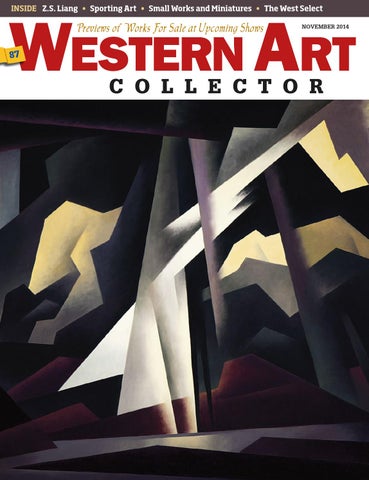 obert Duncan is re-reading The Wyeths, a collection of letters written by N.C. Wyeth to his family. The Utah painter owns three copies of the book. “It never hurts to have some extras,” he says. “It’s a very important book for artists because it showed how Wyeth was inspired by painting,” Duncan says. “He encouraged painting from the heart, and painting by putting yourself into the scene and feeling what you’re

creating. He’s really inspired me by painting things that matter, things I have a feeling and connection to.” Like Wyeth, Duncan says it’s important to paint what moves the eye, but also the soul and the spirit. Naturally, he’s drawn to Native American figures because they are wrapped in beautiful history and tradtion, starting with the broader, more abstract concepts—culture and identity—all the way down to the most specific

aspects, like their clothing and paint on their skin. “Even looking at the old black-and-white photos of Native Americans, they never just dressed plainly. They really put art into who they were…their clothes, their horses, and also in their hopes and dreams,” Duncan says, adding that he paints his own Native American subjects as heroic because that’s how he sees them in real life. “They are heroic figures to me. I think of a people who work with the land

and the things they are provided to make the most of their life. They took what they had and turned it into art and incorporated it into their clothing, in their lives, their religions. I think life is art and art is life, so I really have a lot of admiration for a people who take something that life has given them and make it beautiful.” These ideas can be seen clearly in Duncan’s new work, including At the Riverside, featuring a single figure staring at the rippling reflections of a mountain river. His posture and pose reveal a calmness, and an admiration of nature’s creation. A similar theme is explored in Dusk, with two horses and riders standing on a bluff that overlooks a gathering of elk. “I think of them as heading home in the evening and coming cross some elk across the plains,” the artist says. “It’s almost too late to hunt, because the light is already behind the mountains, so they just watch, kind of admiring the scene.” Duncan’s new show opens November 3 at Trailside Galleries in Scottsdale, Arizona. Fo r a d i re c t l i n k to t he e x h i b it i n g g a l l e r y g o to w w w. we ste r n a r tc o l l e c to r. c o m