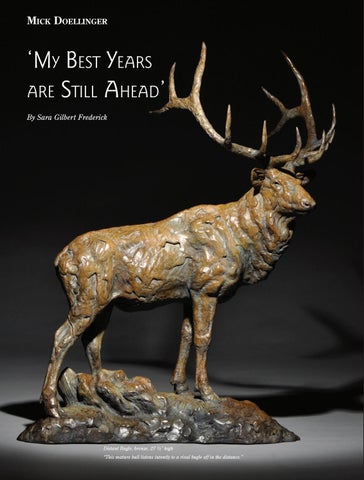 ‘My Best Years are Still Ahead’ By Sara Gilbert Frederick

Distant Bugle, bronze, 27 ½˝ high “This mature bull listens intently to a rival bugle off in the distance.”

“I knew that, if I wanted to be a full-time sculptor, the United States was where I needed to be.”

he first few years after moving to the United States were the lowest in Mick Doellinger’s life. In 2003, he sold his home, his furniture, his taxidermy business, and his studio in Australia to come to America and become a wildlife sculptor. He certainly hadn’t expected it to be easy, but he didn’t realize how lonely it would be. “I had no resources, no family, no safety net,” Doellinger says. “But I knew that, if I wanted to be a fulltime sculptor, the United States was where I needed to be.” He also knew that he couldn’t really go home: Shortly after he left Australia, the mining industry there took off, resulting in a significant shift in the country’s economy. Property values there tripled within a year, and the home that had taken him two years to sell was suddenly way out of his price range. So he settled into a one-bedroom apartment in Fort Worth, Texas, found a

taxidermy job with a local company, and started sculpting as much as he could there. “Those first three or four years were really a struggle,” he admits. “I struggled to make ends meet for several years.” Then, one day in 2006, a man walked into the taxidermy shop where Doellinger was working on a sculpture. He was so impressed by what he saw that he commissioned two pieces. That connection led to another commission, this one for a monument to be placed in a shopping mall. It wasn’t exactly like hitting the jackpot, but it did provide the confidence boost that Doellinger needed to start visiting galleries and attending art shows. One of his visits was to a gallery in Dallas, where he met the owner, who was willing to take a chance on the Australian sculptor. That proved to be a critical turning point for Doellinger, who credits the support

Agitated, bronze, 17˝ high “The African Cape Buffalo are harassed by lions throughout their entire lives, which is one of the reasons they are famous for their dark tempers. This old bull is no exception, as he’s clearly agitated.”

he received from that gallery with increasing his sales. “And it just went from there,” he remembers. “It just kept growing.” Eleven years later, Doellinger and his wife Katrina live in Weatherford, Texas, just outside of Fort Worth. His sculptures are found in galleries and museums in the United States, England, and Australia, and he is often featured in juried shows. In hindsight, he recognizes that the difficulty of those early years forced him to dig deep enough to make it work. “Looking back, moving here was the best choice I could have made,” he says. Moving to America was Doellinger’s second experience as an immigrant. After World War March/April 2018 • ART of the WEST

“There is always somebody influencing you. You may not know it at the time, but there are so many ways that we learn from each other.”

II, Australia aggressively courted immigrants from European countries to help build its workforce and create more prosperity in the country. Doellinger’s parents decided to leave their native Germany and make the journey to Australia with their 18-month-old son. But their ship burned and sank in the Indian Ocean; the passengers huddled in lifeboats until a cargo ship was able to pick them up. “I don’t remember anything about it, which is probably good,” Doellinger says. “Eventually we made it to Australia.” Even as child, though, Doellinger was drawn to all things American. He grew up watching Western movies and loved the scenes of American outdoor life. “My fascination was with your great outdoor spaces and the animals of North America,” he says. “In Australia, all ART of the WEST • March/April 2018

the indigenous animals are unique to the continent. Australia has no indigenous hooved animals, so your animals were exotic to me.” That’s not to say that Doellinger didn’t appreciate the wildlife in Australia. While his three younger brothers enjoyed working on vehicles and riding motorbikes, he would rather play outside with his menagerie of pets. “I had ferrets, rabbits, guinea pigs, pythons, a pony,” he says. “My dad would let me have anything, until I lost interest and didn’t take care of it anymore. Then I had to be the one to find a new home for it.” That parade of pets, combined with the work Doellinger did on cattle ranches and thoroughbred training camps during school holidays, fed into his fascination with animals. He started riding bulls in the rodeo as a 15-year-old and continued compet-

Skimming the Sage, bronze, 15˝ high “Running pronghorn often appear torpedo-like, as if they are skimming over the sagebrush.”

ing until he was 28. At 24, he started his own taxidermy business, which gave him the opportunity to sculpt taxidermy mannequins. By then, he knew that he’d rather be a fine art sculptor—but he also knew that Australia wasn’t the right place to pursue such a career. “Australia didn’t really have a wildlife art market at that time,” Doellinger says. “It’s about the size of the continental United States with a population less than the state of Texas. I was doing bronzes then, but there wasn’t a large enough market for all the subjects I wanted to create.” Doellinger had come to the United States in 1979 to compete in rodeos and stayed for eight months.

Defiant, bronze, 18˝ high “Being outdoors, watching these iconic animals’ rituals during the rut, always fascinates me. Experiencing their power, guttural sounds, and dust baths motivated the creation of this piece. It portrays a bison bull full of vigor, pawing at the ground and tossing dirt, maneuvering, and getting ready to clash heads with another bull that’s entered his space.”

“Looking back now, had I stayed in the U.S. then, I would have been able to become a full-time sculptor much sooner,” he says. But he had dogs waiting for him back home, so he returned to Australia and started his taxidermy business. When Doelliger started traveling to the States again in the 1990s, sculpting was definitely on his mind. An Australian friend operated a Western silvery jewelry and buckle business that required frequent travel to the United States and Mexico, and Doellinger went along to help. During those trips, they would go to horse and stock shows, rodeos, and Western tradeshows. “That exposure showed me

the endless opportunities the United States has to offer,” he says. By the late-1990s, Doellinger was itching to make a more permanent move. He had a successful taxidermy business, but he was no longer inspired by the work. He had been creating bronze sculptures since the 1980s, but he knew that to find success as a sculptor, he’d have to move to America. So, in 2001, he put his house on the market. For two years, he waited for a nibble. Finally, in 2003, he sold it and everything in it, from the furniture to his studio equipment, and officially made the move. There are always several projects going on in Doellinger’s studio these

days. He just finished a pronghorn antelope and a horse head bust, and he’s working on a one-and-one-half life-sized dog for the Fort Worth Police Academy. Such variety is fairly common in Doellinger’s studio. Usually, his ideas start when he sees something that intrigues him. “I see something and a thought, or idea, emerges,” he says. Almost any animal can spark his interest, including some that few others would recognize. He remembers seeing banded mongoose playing in Africa and thinking they’d be fascinating to sculpt. “But then I remembered that probably not everyone could relate to that,” he says. Doellinger intentionally keeps several projects going at one time, so that he can move between them, when he gets stuck on something. “When I get blocked, I can move on to a piece that is working,” he March/April 2018 • ART of the WEST

“Working dogs have always fascinated me. With their keen senses and intensity, their excitement is palpable. This, coupled with the lean, wellmuscled body of a pointer just added to my interest in choosing to sculpt such a fit-looking dog.”

“With their unique, almost pre-historic looks, rhinos are fascinating and sculptural subjects. I chose to sculpt the black rhino, because of its athletic build and distinctive prehensile lip. Known for their irritable nature and aggressive tendencies, Brute Force seemed a fitting name for this piece.”

Tail Wind, bronze, 14 ½˝ high “This portrait of an old longhorn steer shows all the gravity of his age and size—hip cocked, relaxed, with his tail to the wind.”

says. “It’s the tweaking and re-tweaking that takes the most time. I have some pieces that just flow and others that can take years.” Doellinger resists labeling himself as self-taught, although technically it would be an accurate description. But despite his lack of formal artistic training, he has been a student of sculpture since working with his first lump of clay as an 11-year-old. Once he started going to shows and meeting gallery owners, artists and collectors, his education really took off. “I don’t think anyone is really ever self-taught,” he explains. “There is always somebody influencing you. You may not know it at the time, but there are so many ways that we learn from each other.”

At 61, Doellinger has been sculpting for more than 35 years— including the past 11 as a full-time fine artist. “It’s a lot harder than I thought,” he admits. “I’m constantly growing and learning. My sculptures have become looser over time, which hasn’t necessarily been easy for me, based on my more ‘scientific’ sculpting mannequins used in taxidermy. “It’s been an evolution. Nothing has come easy for me; my way around has always seemed to be the long way around. I didn’t plan it that way, but that’s the way it’s happened. I’m a product of my experiences.” Those experiences have helped Doellinger stay positive about the possibilities ahead of him. “My best years are still ahead of me,” he says. Sara Gilbert Frederick is a writer living in Mankato, Minnesota. March/April 2018 • ART of the WEST