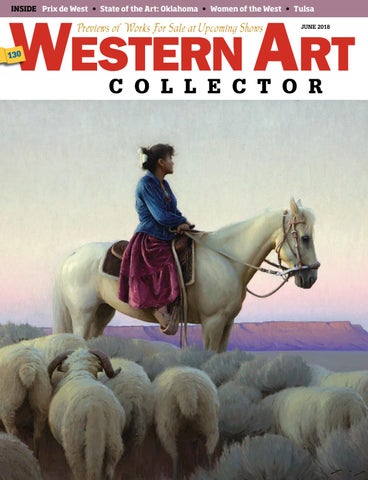 Back to the Farm

ainter David Dibble once took a plein air painting workshop with Scott Christensen, who saw Dibble holding his fingers framed out in front of him to find the composition he wanted. “He came over and told me to put my hands down. ‘Look at what you want to paint and create the composition that is pleasing to you,’ he told me,” Dibble remembers. “He also said that landscapes are more like still lifes than people think. His approach was that when you arrange a still life you’re free to move the orange where you want it—it’s not stuck in place.” Dibble, who has had a long career in

illustration, was fully aware he could rearrange elements of a painting, but it had never clicked for him with his easel work until Christensen kicked down the door. With a new outlook, the Utah painter set off with a renewed interest in painting, one that pulled freely from his years as a digital artist working on animated films— including Rio, Ice Age 4, Ferdinand and The Peanuts Movie—and drew from his own past on a farm, where barns loomed large on the landscape around his home. The artist will have his Trailside Galleries debut on June 11 in Jackson Hole, Wyoming. The show will feature more than a dozen of

his barn works. “I grew up on a farm. As I’m getting older and wanting to tell stories, it’s all coming out still. I loved growing up in the farm fields, and having the freedom to wander, which kids don’t get to do now,” he says. “It’s part of who I am. My family is intrinsically linked to that land that is now being turned into suburbia, so I’m looking back into that past and I’m wanting to communicate so people knew what was there before.” Dibble, who also teaches illustration at Brigham Young University in Provo, Utah, says he’s putting the barns on up-close, in-your-face display, like a Chuck Close image that looms over the viewer as if confronting them. The light in each painting is unique, from golden sunsets (Knock on the Door) to snowy mornings (Patriarch) to harsh afternoon sun (Bright Morning). This a product of his entertainment career, in which he does digital paintings that animators use to inform the light and color in the final film. “I would create a narrative of color and light, and the scenes could come to life based on their atmospheric condition,” he says, adding

that he’s bringing his ability to paint all kinds of light into his fine art work. And where many Western artists avoid many digital processes, Dibble has embraced them in the lead-up to his final oil works. Not only will he use photographic reference, but he will use Photoshop to tailor his compositions,

and digital paintings to sketch ideas. “Digital is a tool, and tools are meant to be used to help your work,” he says. “Some of my dear friends won’t use digital at all and that’s fine and their choice, and they do beautiful work. I just see an opportunity to use these tools to prepare my final works.”