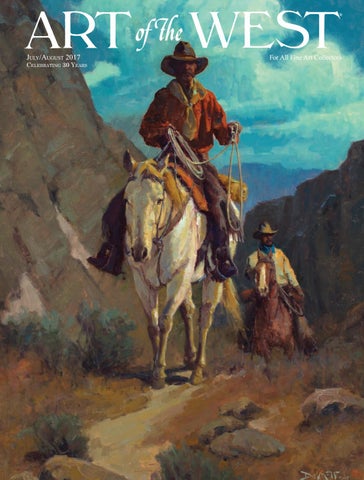 was an out-of-control child,” John DeMott says. “I was right-brain from the get-go. We would walk to kindergarten, and sometimes I wouldn’t make it to class, so my mother would come looking for me, and I would be catching butterflies. I did what I wanted to do, not necessarily what I was supposed to do. I have kind of marched to my own tune my whole life.” He has indeed. But, oh what a tune it is. Today, DeMott is a successful artist—and part-time musician—living Above: in Loveland, Colorado, where he is The Law of the Good Book, oil, 9˝ by 12˝ surrounded by the natural beauty, the “A lonely night and a friendly fire. The lawman people, and the wildlife he portrays in reads the good book.” his paintings. Opposite Page: Recalling his childhood, DeMott The Plainsmen oil, 14˝ by 9˝ says he grew up in Southern California, “There is nothing that symbolizes the great where he and his family lived next American West more than the American bison.” door to Western TV stars Roy Rogers

and Dale Evans and attended school with their children. “The first time I walked into their house, I remember the impression of seeing all that Western paraphernalia,” he says. “It got me interested in cowboys and Indians and the West.” DeMott’s father was an entrepreneur, music teacher, and horse trainer, so it was not surprising that his son got into team roping and, along with his high-school sweetheart, Cindy, whom he would later marry, competed in local events. As a young boy, he spent hours drawing but, by July/August 2017 • ART of the WEST  37

the time he was in high school, he was devoting much of his time to sports, playing football and baseball. During those years, he also became an entrepreneur. “I wasn’t a great student, but I was really into my shop classes,” DeMott says. “I had a knack for doing things with my hands and creating something. I started dabbling instead of doing my assignments. I was making sailboats and roses out of copper and brass. Cindy and I would load them up in the pickup and go to the beach at Marina del Rey and sell them.” His creations were a hit and, by the time he graduated from high school, DeMott’s metal works were being sold throughout the world. He and his brother had formed a company to produce the metal décor items, which included sailboats, roses, and running horses,

and were making a good living at it. “On the TV show ‘Dallas,’ JR would go out for lunch and, there on the tables, were brass oil derricks,” DeMott says. “Those were mine; we did them for the show.” Life was good for the young man, who was barely out of his teens, but something was missing. “I always had a calling to be a painter,” DeMott says. “I sold the business to my brother and, because I still got royalties, I was able to focus on my art.” By that time, DeMott and Cindy had married and had two daughters. They decided to move to the mountains in Southern California, where he could begin to teach himself to paint. But first, he packed up his family—his daughters were just 3 and 5 at the time—and spent a month driving around Wyoming, Montana, and Colorado, visiting galleries and museums along the way. “I wanted

“The French Canadian trapper could slip quietly up on game in a canoe to have a successful harvest.”

to get advice on what I needed to do to become a Western artist,” he says. “I got a lot of good advice.” Back home in California, DeMott set out to learn to paint. He studied the works of the Old Masters and began to paint wildlife, birds, and animals in watercolors, transitioning to oils eight years later. “Learning to paint on your own is a long process,” he says. “I learned to draw, doing pen and ink and then watercolors. It was a natural way to start.” In the late ‘70s, DeMott entered the Death Valley Show in Death Valley, California, and the George Phippen Show in Prescott, Arizona— and sold out at both. Before long,

Wyoming Splendor, oil, 36˝ by 34˝ “One of my favorite times of the years is the fall. I love to be in the Tetons, chasing the majestic moose.”

galleries had taken note of his work, and he was on his way to a successful career as a fine artist. He credits part of his success in the art world to the business knowledge he gained while running his metal works company. “I got to be a pretty good business guy,” DeMott says. “I think that’s

important. I think there are a lot of great artists, who aren’t as successful as other artists who aren’t as good as they are, but who are better at business. A lot of artists are shy, are introverts. They sit in the studio and work—but, ‘out of sight, out of mind.’ If you’re not out there putting a face to your art, it can work against you. Even if I’m not in a show or an auction, I go and meet collectors and other artists. If you just sit in your studio and solve problems, you

become sterile. You have to get out and clear your mind.” In 1991, DeMott decided it was time to clear his mind in another way. While participating at the Cheyenne Frontier Days Western Art Show in Cheyenne, Wyoming, he was visiting with sculptor Fritz White. “He talked me into stopping in Loveland, so we did, and we bought a 20-acre ranch there,” he says. “I’m still here. After the LA riots [following the beating of Rodney King], I didn’t July/August 2017 • ART of the WEST  39

Above: Texas Hold ‘Em, oil, 30˝ by 48˝ “Legend has it that the first poker game of Texas Hold ‘Em was played in the small town of Robstown, Texas, around 1900.” Opposite Page: He Rides With Valor oil, 36˝ by 24˝ “The strength of mind and spirit, as one rides into danger, was the inspiration for this piece.”

want my kids to be raised there. My career was taking off, and I needed to be in the West. “My career took another leap with that move. I had exposure to the things that motivated me as a painter: mountains, animals, Indians. The quality of my work changed, and I connected with other artists like Richard Schmid and Clyde Aspevig. I painted with them and hung out at their studios. It was invaluable to me.” When composing a painting, DeMott says he sets it up almost like it’s a movie production, then takes photos and does small sketches, before recomposing back in his studio. “I’m like a director working with a cast of characters,” he says. “For one painting, I had 30 models. The pre-planning of a painting is a lot of work. I’m concerned with the lighting, shapes, values, and composition. I just did a painting—Texas Hold ‘Em—of the first poker game played in Texas around 1900. I researched it, hired the models, and got them

dressed. Faces are the first things I think of, then shapes and composition. The expressions tell the story; you see who has the winning hand and what the others are thinking. You can just feel that game.” DeMott works in a large, open studio at his ranch, a space that often is filled with music, as well, when he and his friends get together for jamming sessions. He has played the guitar since he was a boy and has formed a band called Yesterday’s News. “We play some gigs and travel a little bit,” he says. “Art is like music; values are like notes. You can tell when you hit a wrong chord; values are the same way. Throw in a loud color, for example, and it will stick out like a wrong note.” Although DeMott and Cindy are now divorced, they remain good friends, often spending time with their three daughters and five grandchildren. He’s glad he made the move to Loveland, and he’s pleased with his career and his life. “I get to do what I want to do; that’s a July/August 2017 • ART of the WEST  41

Against a Fiery Sky, oil, 20˝ by 24˝ “I was in the mood to do a loose, alla prima painting. This piece was about simple shapes, movement, and color.”

big plus,” he says. “I’m my own boss. I get to create something and put it out there. The worst part about being an artist is that it’s a very lonely profession; it’s you and your easel in the studio, trying to solve problems. There’s the uncertainty of being accepted by your peers and collectors. Even when you ‘make it,’ there is still a certain amount of uncertainty. You don’t want to be a one-hit wonder.” Asked about the highlight of his career, DeMott quickly cites the sale 42  ART of the WEST • July/August 2017

of one of his paintings—Blackfeet in the Medicine River Valley—at the Russell Auction in Great Falls, Montana, three years ago. “I broke my record at that auction with a sixfigure sale that was double the estimate,” he says. “That was the most exciting moment of my career.” DeMott isn’t one to rest on his laurels, however. “I ask myself, ‘What am I going to do to beat that last painting?’” he says. “I always feel the next painting will be better than the last.”

So it is that DeMott continues to study the artists he most admires, constantly striving to improve his work. “It took me 40 years to learn how to paint like the dead guys, and now I’m 63 and almost dead,” he says with a laugh. “It’s been a long and winding road.”

Vicki Stavig is editor of Art of the West.