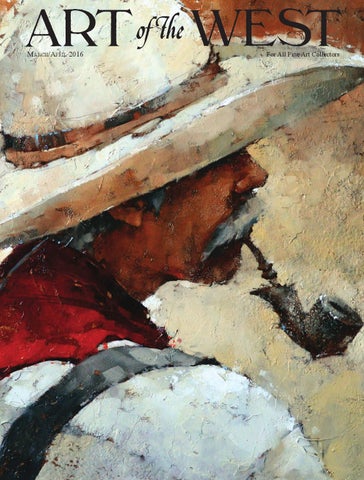 n his much-loved memoir “A River Runs Through It,” writer Norman Maclean famously noted, “In our family, there was no clear line between religion and fly-fishing.” For Brent Cotton, who counts Maclean among his favorite authors, there is no clear line between art and nature, particularly rivers. And for him, both represent a sort of near-religious calling. “Just as Maclean writes at the end of ‘A River Runs Through It’ that he is ‘haunted by waters,’ so am I,” says Cotton, who strives to evoke similar feelings through his art. “There is something magical and enchanting about flowing water and the way light dances upon it. I’m mesmerized by it. Trying to recreate all of 38

the various qualities—movement, translucency, etc.—is a wonderful challenge.” Stand before one of Cotton’s riverscapes, lovingly rendered in oils, and you might find yourself transported back to your own favorite river, a stream where you made mud pies as a child, the watering hole to which you led your first horse, or a tributary where you fly-fished your way through a midlife crisis. Cotton’s vivid brushwork captures the play of the light over the moving water, the shadowy blur of the river bottom, the flash of a leaping trout. Look at it long enough, and you’ll swear you can feel the mud between your toes and taste the mist in your mouth. This is exactly what Cotton hopes will happen. “That’s what I’m after:

those fleeting moments that we’ve all experienced and can appreciate,” he says. Cotton’s affinity for art and nature represent a lifelong affliction. He came of age in Idaho and Montana, in a part of the country where rivers and mountains and open space beckoned just outside the windows. And he was born into a household full of artistic people eager to nurture his emerging talents. Eastside Highway, oil, 20˝ by 32˝ “This is the view coming into my hometown of Stevensville, Montana. It’s a scene I’ve driven by a thousand times but hadn’t really noticed or appreciated, until I saw the way the light was hitting the trees and buildings on this particular day.”

“My art education has been informal for the most part, starting when I was a kid and creating ‘messterpieces’ under the watchful eye of my grandmother on her dining room table,” Cotton says. “She was a talented watercolorist in her own right. I come from an artistic family on both my mom and dad’s side and, although I’m the only one that ventured out and made fine art my profession, there are several others that probably could have. My folks were always very supportive of my decision to pursue this dream, and that has been immeasurably important.” Under the guidance of his high school art teacher, whom he counts among his earliest and most important encouragers, Cotton ventured out on a somewhat unorthodox path. Rather than attending art school, he

sought out workshops and reached out to artists whose work called out to him. “I admired and was fortunate to receive instruction from some of the greats in Western art, including Howard Terpning, Jim Wilcox, and John Moyers,” he says. “All of these experiences were amazing in not only the knowledge these artists imparted, but in being able to share the wonderful camaraderie of my fellow students.” Cotton’s apprenticeship with Oklahoma artist Christine Verner proved particularly formative. “I spent two years under her tutelage, and it was that experience that truly put me on the path that I’m on now,” he says. That path was not a linear one. Restless and eager for a change of scenery, he decided to visit Hawaii

The Awakening Dawn, oil, 32˝ by 40˝ “This scene is from where I hunt elk and deer in the fall. To create this piece, I used a really bad cell phone photo, my not-so-good memory, and a healthy dose of artistic license. Despite all that I am really pleased with how it turned out.”

and ended up staying for several years. During his time on the island, Cotton, who had gravitated toward Western scenes in the past, had the opportunity to broaden his artistic repertoire by working to recreate Hawaii’s landscapes. He was particularly fascinated by the interplay of the sunlight and the steam on the flanks of Maui’s volcanoes and spent a great deal of time working to depict it. He earned pocket money by peddling plein air paintings to tourists on the beach and even now wonders how they transported the still-wet oil

Catching the Light, oil, 40˝ by 48˝ “This painting depicts the Bitterroot River in western Montana, my home river. I spend many days on this great trout stream, either fishing, floating, or painting, and it never fails to inspire me. It’s quite common for me to grab the fly rod and tell my wife I’m going to get more . . . reference.”

paintings home. He figures there are dozens of smudged Brent Cotton paintings in the homes of people who visited Hawaii in the late ‘90s and wanted a one-of-a-kind souvenir. Another important life event occurred while Cotton was in Hawaii. He met Jennifer, a Montana native and the woman he would marry. “Two Western kids who wound up in Hawaii at the same time,” he says. “What are the odds?” Although Cotton and Jennifer enjoyed many aspects of the island life, they were homesick for rivers and mountains. In a leap of faith, they decided it was time to make the move. They packed up and flew back to the mainland, soon settling on a place in Montana with enough acreage for plenty of livestock. The two of them, along with their son, daughter, and various animals, still live there today. “I’m blessed to live where I do,” he says. “We have 15 acres complete with horses, chickens, cats, a dog, and a few wily cutthroat trout swimming in our pond. It’s pretty idyllic.” 40

Winter Path, oil, 14˝ by 11˝ “This piece was inspired by a trek into the woods with my family to pick out our annual (Charlie Brown) Christmas tree. I like the way the path leads the eye through the violet shadows into the sunlit warmth beyond.”

The change of scenery fed Cotton’s artistic imagination, and his work continued to evolve. Throughout his artistic career, he had course-corrected to seek a personally satisfying and commercially viable niche for himself. “I actually began my career as a self-taught woodcarver of birds and gamefish, and these were the first works I displayed in galleries,” he says. “I had a modicum of success with these, but realized it would be tough to make a living as a carver, so I decided to focus on painting. As I grew as a painter, landscapes became my passion, and I was always in search of the great vista or unspoiled wilderness to portray on canvas.” Cotton’s technique evolved, too. Where he had initially painted using brushes, he began exploring other, 42

less traditional tools. “For the past few years, I’ve been experimenting by working predominantly with a palette knife,” he says. “I’m really enjoying the results. For a crude tool, it’s capable of some pretty interesting effects.” Cotton typically spends about two weeks creating and then revising each painting, working on one area while another section dries. The end result is a layered and boldly textured portrait of light, shadow, and water. He has, through constant tinkering, developed a recognizable style that has won him admiration, sales, and a coveted place at prestigious shows such as the Prix de West. Despite the fact that, by many measurable standards, Cotton has achieved artistic and commercial success, he still strikes a humble

Turquoise Roof, oil, 6˝ by 8˝ “I discovered this farm on a recent painting/ fishing trip, and the complementary colors, combined with the interesting light, really caught my eye. This little piece is a study for a larger studio work that I hope to create at some point.”

and even self-deprecating tone when he talks about his work: “I think finding your own voice is probably the hardest thing for an artist to do,” he says. “Learning the techniques is the easy part; what to do with that knowledge is much more difficult. I spent many years trying to find that niche and striving to say something new in my work. I still struggle with that and, quite honestly, most days I feel like I’m just winging it.” Winging it or not, Cotton is enjoying life these days. Without going far from home, he can find inspiration.

Power and Light, oil, 32˝ by 40˝ “These are the falls on the White River in Oregon, a spectacular place indeed and a fun scene to recreate. I wanted to convey a sense of the fall’s power and combine it with sublime lighting to show nature’s glory.”

“The Bitterroot Valley is a wonderful combination of rugged peaks, pastoral views, and pristine rivers; for an artist, it truly is a Shangri-La,” he says, noting that he’s nowhere near exhausting the possibilities. “There are new places to discover just around the bend, and I’ll never grow tired of painting my corner of the world.” Cotton also can find recreation and contemplation—in the form of a river, of course—close at hand. “As an avid fly fisherman, I find that

standing knee deep in the Bitterroot River with a fly rod in hand is the quickest way to quiet my mind and feed my soul,” he says. Cotton’s ranch, his art, an occasional hunting or fishing excursion, and his family keep him fully occupied. Family life is particularly important to him: “[Jennifer] has been my biggest fan and support; I truly couldn’t manage our full work and family life without her,” he says. “We have two small children, a boy and a girl, and I love seeing the world through their young eyes and minds. Our dining room table looks like my grandmother’s used to: papers and paints everywhere. They both say they want to be artists like Daddy when they grow up. We shall see.”

What’s next for Brent Cotton? He’s not sure; he’ll go where the river takes him. Each day, standing before his canvas in the studio, he sets out to take his viewer to the places he gets to go every day. He knows he’s reached his goal when he manages to elicit the same deep emotions in his audience that he himself feels when he looks at a well-loved river or landscape. “I’m striving to create pieces that move the soul, along with being visually pleasing,” he says. “If I can transport the viewer into a timeless place that provides a sense of peace and is mood-evoking, then I think I’ve succeeded.” Clover Neiberg is a writer living in Portland, Oregon. March/April 2016 • ART of the WEST