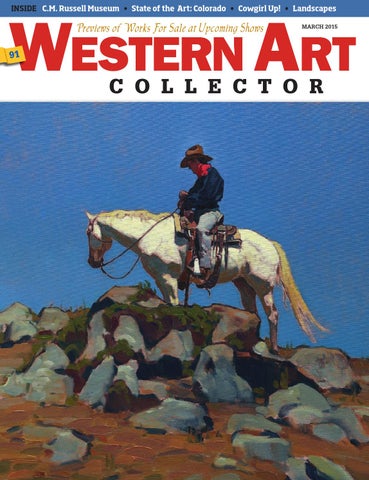 INSIDE C.M. Russell Museum • State of the Art: Colorado • Cowgirl Up! • Landscapes MARCH 2015

ainter Bruce Cheever is a big believer in luminism, a style of painting that was largely developed by artists in the Hudson River School in the mid-19th century. “A lot of it goes back to Albert Bierstadt and the Hudson River artists. They were looking for romance, and they found it in their paintings, which just glowed,” Cheever says, explaining that luminism is the theory that light can penetrate the layers of a painting and reflect back out. “It gives the painting a lot of depth.” Cheever, who lives and paints in Woodland Hills, Utah, says he has also borrowed ideas from Renaissance painters, tonalism and a variety of

other styles to create his uniquely composed landscapes. “I admire my contemporaries greatly. But I always want to go out of my way to look a little different, which is why I looked at the Renaissance and these other areas…to incorporate them into my own style,” he says. “I’ve borrowed bits of things to paint into my scenes...they inform my own work.” The exhibition Luminous: Bruce Cheever, opening March 2 at Trailside Galleries in Scottsdale, Arizona, will showcase Cheever’s new landscapes, much of which are from various locations around the world. Low Tide, featuring two boats grounded by the tide, was painted

in The Cobb, England; Swiss Farm was painted in the very heart of Europe; and Hopi Moon, featuring a magnificent Native American village, is set in an ancient settlement in Walpi, Arizona. “I’ve painted this village several times. It’s on the Hopi reservation, smack dab in the middle of the Navajo reservation. It’s called First Mesa, and it’s been continuously lived in for a thousand years or more. I really love that country,” Cheever says. “They actually won’t let you take pictures there or even paint. It’s very sacred to them. I’ve emailed them and they’ve allowed me to use turn-of-the-century photographs as my source material.”

Much of his work is done in layers, which can be a meticulous process that involves painting, drying and also sanding paint off and re-applying. But, in the end, that method gives him that luminous look he’s going for, a look that can be seen clearly on Midway Pastures with his delicate detail work, but also his looser brushstrokes. “Early in my career I painted too tight. I’ve really tried to loosen up so your eye can rest. I’ll get tight where it needs to be tight, but then I’ll open it up in other areas,” he says. “You’re battling constantly with all the elements of art—it’s a tight rope you walk.” Ultimately, though, Cheever just wants viewers to feel his works. “My main hope is that people feel nostalgia and that the works trigger a peacefulness,” he says. “That’s what I’m after here. I also love the landscape, which is why I romanticize it the way I do.” Fo r a d i re c t l i n k to t he e x h i b it i n g g a l l e r y g o to w w w. we ste r n a r tc o l l e c to r. c o m