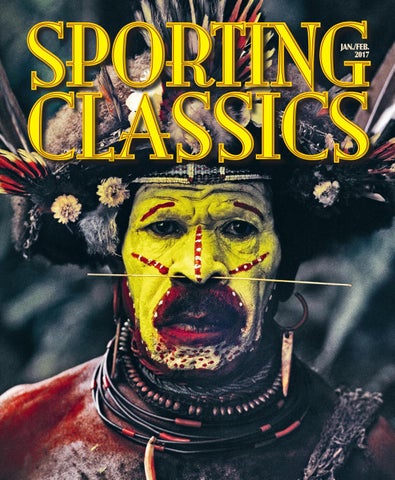 THE HEART OF A LION

The African lion speaks to the heart and soul of acclaimed artist John Banovich. BY DAVID CABELA

ohn Banovich is no stranger to the discerning wildlife art collector. His paintings have adorned the covers of multiple national magazines, the walls of prestigious museums, and the homes of some of the world’s most discriminating connoisseurs. However, Banovich is not a man driven by the possible fruits of success—greatness demands something much more personal than the praise of others or financial reward. It demands a passion for something beyond self, the courage to fail, the humility to learn, and the perseverance to see things through, especially when it is hard and, eventually, the understanding that while perfection may be unachievable, the desire to reach for it should not be subdued. John Banovich is driven by a passion to recreate more than remarkable images of creatures he loves, but to capture their spirit and hope to inspire others the way these creatures have inspired him. To do this, he has focused on a subject matter that speaks to his soul—the earth’s largest mammals—deer, elk, bison, tigers, leopards, lions, cape buffalo, and elephants to name just a few. And though he has painted big game animals from all over the world at a level higher than most artists ever achieve, no better place exemplifies Banovich’s personality better than Africa, and no animal in Africa epitomizes the heart of this artist more than the lion. “The lion is part of me,” Banovich says. “If I have a totem animal, it is the lion.” He pushes this passion for lions even further by stating that if he had only one day left to paint, he would paint a lion. “Lion’s have always appeared in my work. I never tire of painting them.” In Banovich’s most recent study—a seven painting series on Victoria Falls—his totem animal makes a significant appearance near the roaring waters. “Victoria Falls mesmerized me with its living, breathing beauty. It’s as if this body of water lifts up the world around itself and then breathes life into it. It absolutely pulsates with

life. As the light filters through the mist and hornbills cross over from Zimbabwe to Zambia, I am captivated by a sight that seems more like a living creature than a landscape. “With the modern influx of human activity, most megafauna no longer frequent its shores, but you get the real sense they most definitely once did. I could just see the lion staring into the falls the same way I found myself doing so.”

o what is it about this creature that has captured the heart of an artist so dedicated to his craft? What is it about this beast that inspires him so thoroughly that he feels a kinship with it that surpasses every other creature he’s studied? For Banovich, it is many of the same reasons the lion has fascinated humans throughout history. He believes the lion represents the best of human qualities—as well as the worst. “The lion’s story reflects the human story,” Banovich says. “It is no wonder they have appeared in images of most civilizations throughout time. No other beast has the dimension of a lion, representing so much goodness and so much darkness. It is often like looking into a mirror. Our capability for savage violence as well as our desire for tenderness are found within the lion pride. They represent our deepest fears as well as the courage we all strive for. They are beautiful and strong, but also scarred and fragile. They are all individuals, but work best as a team. And we as humans have never been able to contain our fascination with them. If it was up to me, we never would.” A quick study of Banovich’s many lion paintings reveals an artist who has mastered the highly difficult brushstrokes needed to capture the details that make a lion seemingly come to life on the canvas. What may be more impressive, however, is how they reveal an artist who truly understands the lion. They not only come to life on his canvas, but the viewer can begin to understand the complexity of the lion and how these big cats, as Banovich believes, are like a mirror into what we are capable of as people.

Maneaters of Tsavo depicts the two maneless male lions that killed a reported 130 workers on the Kenya-Uganda Railway in 1898. Right: Somewhere Between Cubs &amp; Killers. Opposite: Trophy Hunter.

At the risk of over-anthropomorphizing the lion, it only takes a quick glance at a few of his pieces to see why the world has always been so fascinated by these animals. He captures moments in their lives that are very real to life, yet impossible not to identify with. In his painting, A Mother’s Wish—Long May He Reign, we see the tenderness of a proud mother. In Game of Lions, we can almost feel the courage of soldiers rushing into battle. In Man Eaters of Tsavo, murder, rage, and the horror it instills. In It’s a Jungle Out There, our need and ability to take calculated risks. In Somewhere Between Cubs &amp; Killers, we see the importance of family and the desire to stick together. These are but a tiny peek into the scope of Banovich’s work on lions. But they offer a glimpse of why they have consumed so much of his efforts. “If I had to put a number on it, I would say that over the course of more than forty trips to Africa I have studied more than 5,000 lions,” Banovich says. “And every time I see a lion—any lion—it is like I am seeing an old friend. At the same time, it’s also as if I am seeing this magnificent creature for the first time.”

anovich has clearly been drawn to Africa, and in particular, the lion, for the most intimate reasons. And, like any outdoor enthusiast who cares about what happens to the animals he loves, he not only worries about the lion’s fate, but has put his love and passion for them into action through Banovich Wildscapes Foundation. While the Foundation benefits many different species, the lion has, like in Banovich’s work and life, been the focus of many Wildscapes projects. “The lion is like the canary in a coal mine,” he says. “When their numbers drop, it shows that something bigger is wrong with the environment. Because lions live in prides—because they live in family units—they face many challenges and have to deal with so much more when the landscape changes. “Throughout most of their history, they have withstood nearly

every one of these challenges valiantly and without serious danger to their overall populations. Who could have ever foreseen that a box of pesticide could become the greatest risk to their survival?” he says, referring to the pesticide Furadan, which has been used with deadly success to poison lions and other wildlife in areas where local farmers see wild animals as a threat to their livelihood. Banovich is currently working on plans for a museum tour specifically featuring lions. “I would like to get the conversation moving in a meaningful direction,” he says. “The lion has become such a controversial animal that what should be a subdued, well thought-out, and meaningful conversation on the best way to conserve these beasts, turns into a shouting match with headline grabbing one-liners and hate spewed back-and-forth. It never gets us anywhere.” The tour, set to start at the Nevada Musuem of Art in January of 2019, is aptly titled “King of Beasts: A Study of African Lions by John Banovich.” Banovich, who has given so much of himself to the lion, hopes to inject a sense of urgency into the conversation and get people talking about sustainable, long-term solutions to the lion’s survival. “If Africa loses the lion, it loses so much more than a great cat— it loses it’s soul.” Banovich’s goal is to portray the African lion as we have seen it throughout history—from B.C. up to modern times and then projecting what it may look like in the future. “I would like to pose the question of how do humans live with big beasts—in particular big beasts that can and do eat humans from time to time. What kind of place does that kind of beast have?” The tour will feature at least 35 original Banovich pieces, taxidermy, historical artifacts, photographs, as well as artwork depicting the lion throughout human history. “The plan,” Banovich says, “is to take the viewers on a great journey with the African lion.”

Here, Banovich captures two scenes typical of the African veldt. In Hail to the King, these zebras have “read” the body language of a lion, realizing it is not on the hunt and allowing it to stroll by close to their ranks. Game of Lions captures the intense competition over a kill between the big cats and other predators.

istory will eventually decide where Banovich belongs in the list of wildlife artists, but all of the greats not only master their craft through years of sweat and blood and failure, but they find a way to capture on canvas something far beyond a detailed recreation of an animal’s physical characteristics. They find a way to harness the essence of a creature and share it with others in a way that inspires them to not only see the art but to react to it. Early on in life, Banovich discovered two truths about himself— he was meant to be an artist and he was meant to paint wild animals. He had always been drawn to Africa and the unharnessed wildness it represents, but it was only after visiting and staring into the eyes of a real wild lion that he realized a certain kinship existed with it that he may never fully understand. He would, however, embrace it and begin a journey with Africa and with lions that would last the rest of his life. For Banovich, an Africa without lions would not be Africa because it would be missing its soul. Banovich’s art reveals a deep understanding of wild beasts and the places they live. Whether it is elephants, leopards, bears, moose, lions or any of the world’s mega fauna that he’s been drawn to, it is apparent these creatures are more to him than simply subjects to paint. He understands, better than most, that they are a part of him. And so he paints them. He paints them because for artists like Banovich, to not paint them would lead him down that path far too many of us find ourselves following. It is a path of settling. We settle for what is easiest or what makes us the most money or what gives us the most short-term pleasure. We settle for cut-rate versions of ourselves. But Banovich refuses to settle, because his soul belongs to Africa and he shares the heart of Africa’s most iconic beast. And the lion never settles. n

by David Cabela John Banovich is no stranger to the discerning wildlife art collector. His paintings have adorned the covers of multiple national magazines, the walls of prestigious museums, and the homes of some of the world’s most discriminating connoisseurs. However, Banovich is not a man driven by the possible fruits of success—greatness demands something much more personal than the praise of others or financial reward. It demands a passion for something beyond self, the courage to fail, the humility to learn, and the perseverance to see things through, especially when it is hard and, eventually, the understanding that while perfection may be unachievable, the desire to reach for it should not be subdued.