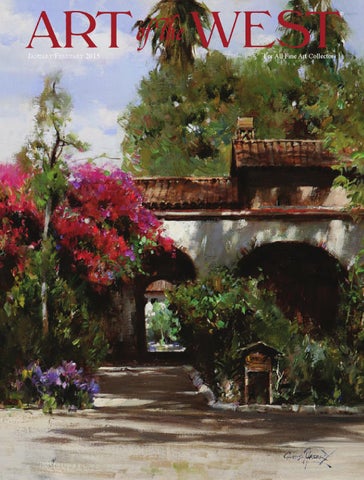 Country Life, oil, 16˝ by 20˝ “I relive the experiences of the various rural scenes whenever I pick up my brush to paint. Using my sketch and photos as a guide, my thoughts are back driving through this landscape, having the freedom to stop at leisure and, because there is no traffic, to simply enjoy the wonders of this world.”

The Passion Continues By Vicki Stavig

small boy of 7, with curly dark  hair,  bright  brown  eyes,  and  a  serious  expression,  walks  home  from  school,  looking  at  shop  windows, as he passes. A movement  in one of those windows catches his  eye, and he stops, when he sees an  artist on the other side of it. The boy  is  mesmerized,  as  he  watches  the  artist mix colors and move his paintbrush  across  the  canvas.  Slowly,  a  mountain  appears.  The  wonder  of  seeing  that  painting  evolve  stays

with  the  boy  and  creates  in  him  a  desire to create similar scenes—and  evoke similar responses.   That  boy  was  Cyrus  Afsary,  who  has since earned countless honors for  his paintings, including awards from  the  Academy  of  Western  Art,  Oil  Painters of America, the C. M. Russell  Museum,  and  most  recently  Best  of  Show  at  the  Collectors’  Reserve  Show  at  the  Gilcrease  Museum.  He  also  has  exhibited  his  work  at  several  prestigious  venues,  including

Mission, oil, 12˝ by 16˝ “The mission, with the many arches and so many wonderful areas to explore, causes wonder and a sense of history, and a sad question comes to my mind: Why is the San Juan Capistrano Mission not well conserved for many future generations? It is slowly crumbling away.”

become  ill  with  a  heart  condition  and  could  no  longer  work,  so  the  money young Afsary made, little as  it was, helped to support the family.  When he was 15, Afsary enrolled  at  the  Conservatorium  of  Art.  At  about the same time, he and a friend  began  to  visit  nearby  tribes  on  the  outskirts  of  the  city,  where  they  enjoyed  watching  the  musicians  and dancers and wandering through  merchants’ stalls. Those sights provided the budding artist with fodder  for sketches and created a desire to  capture the lives of those people and  to convey their feelings and the daily  challenges they faced. By the time he was in his late teens,  Afsary was selling his paintings from  a  gallery  that  was  frequented  by  tourists from throughout the world.

“My  friend  worked  at  the  gallery,  and  he  recommended  my  work  to  the  owner,  who  contacted  me  and  added  my  paintings  to  his  gallery,”  he  says.  “I  enjoyed  painting  the  tribal  characters  and  also  landscapes.” With those sales, the young  artist now had a steady income that  allowed him to help support his family—his father had died when Afsary  was  16—and  to  pay  his  university  and personal expenses. Afsary continued to travel beyond  the city, visiting nearby rural areas,  where he painted the people and the  land. Those paintings made such an  impression  on  the  collectors  who  purchased  them  that,  even  during  the past decade, they contact Afsary  and ask for more information on the  subjects he captured in them.

Academically,  Afsary  was  influenced  by  Russian  and  European  masters.  “They  were  my  inspiration, because of their technical ability,  their  methods  of  rendering  the  subjects, and their understanding of  their art,” he says. On another level, however, Afsary  was  influenced  by  the  American  cowboy,  who  rode  the  wide-open  ranges  half  a  world  away  and  who  was  featured  in  movies  that  he  and  his  friends  often  watched.  Little  did  Afsary  know  that  one  day  he  would  live  in  America’s  Southwest  and  paint  the  people  and  scenes  that  had  captivated  him  on  film.  “I  always enjoyed the Western movies,  the  Wild  West,  and  especially  movies  featuring  John  Wayne  and  Lee  Marvin,  the  open  landscapes,  and

Spring Pasture, oil, 20˝ by 24˝ “The snow-capped mountains are like a frame that surrounds a painting. It is my way of appreciating the wonders of these special places, hosting a variety of animals, forests, pastures, creeks, and waterways flowing with the snow melt.”

the tribal Native American,” he says.  After  earning  degrees  in  liberal  arts  and  interior  design,  Afsary  served  a  required  stint  in  the  military.  By  then,  he  says,  the  Middle  East “had become suffocating for an  artist,” and several of his friends had  moved to others parts of the world.  Opposite Page - Craftsman, oil, 20˝ by 16˝ “The Heard Museum in Phoenix, Arizona, holds Native American celebrations at different times of the year, which offer an opportunity for me to observe the techniques and also take more photos of the artists, such as this man, who is painstakingly decorating his vessel, not at all concerned with the interested observers.”

Afsary’s parents were both deceased  by then, and he had fulfilled his commitment to his family, so he packed  his bags, his paints, brushes, and a  few  small  canvases  and  headed  to  America,  where  he  stayed  with  a  friend in Las Vegas, Nevada. Afsary  hit  the  ground  running,  showing  his  paintings  to  the  folks  at  the  Grand  Gallery  at  the  MGM  Grand  Hotel  and  was  immediately  hired on as the resident artist. That  position  included  painting  some  of  the  celebrities  he  had  seen  and  admired  in  the  movies,  including  Sylvester  Stallone,  Frank  Sinatra,  Dean  Martin,  and  John  Wayne.

Afsary  would  do  a  quick  color  sketch of his subject, recording the  skin  tone,  eye  and  hair  color,  and  other  notable  colors  and  points  of  interest,  then  take  photographs  as  a  reference  and  use  them  all  while  working on the painting. Not unlike his younger days in the  Middle East, Afsary also would often  head to the countryside beyond the  city  and,  whenever  time  allowed,  would  travel  to  various  parts  of  the  West, attending powwows and experiencing  the  culture  and  brilliantly  colored costumes, as well as the art,  associated  with  Native  American  tribes.  He  also  visited  the  missions

Late Spring, oil, 20˝ by 30˝ “There are times, when you simply must stop the car and allow your senses to absorb the scene, such as this one in the Northwest, with the snow-capped mountains surrounding this expansive and lush pastoral area. My camera is always handy and sometimes, when I want to linger, I will sketch the view.”

in  California,  drawn  specifically  to  San  Juan  Capistrano,  which  has  become a favored subject. “I have always been fascinated by  arches, and the historic architecture  of the missions was an added draw,”  Afsary  says.  “I  derived  inspiration  from  the  scenes,  even  if  some  area  was  in  need  of  conservation.  There  are  so  many  exceptional  examples  of  arches  in  buildings  in  different  parts  of  the  world,  and  the  San  Juan Capistrano Mission is a special  example of one in the West.” As  he  traveled  and  painted,  Afsary’s  style  evolved,  showcasing  his  technical  ability  with  light  and  his  proficiency  in  the  use  of  color,  and  his  work  captured  the  attention  of  the  many  collectors  who  visited the Grand Gallery. Tragedy  struck in November 1980, however,  when the MGM Grand burned, the  flames  taking  with  them  most  of  Afsary’s paintings and sketches and  leaving  him  without  a  job.  It  was  a  valuable lesson of sorts, as he realized it was unwise to depend solely  on one gallery to market his work.  Not  surprisingly,  other  galleries  were more than happy to represent  the talented artist. In  1988,  Afsary  left  Las  Vegas  behind.  “I  decided  to  move  to  Arizona,  because  of  the  growing  art  market  and  the  developing  artist  community,”  he  says.  “It  was  also the hub of Western art.” Today,  working in his studio there, he often  becomes  so  absorbed  in  his  work  that, especially when preparing for a  show, he doesn’t communicate with  anyone for a few days.   January/February 2015• ART of the WEST 33

Homestead, oil, 9˝ by 12˝ “A small farm, with animals grazing, catches my attention on this trip out beyond any city I might be visiting at any given time. Being able to enjoy the countryside, I’m always collecting images, and my senses experience the aromas of the seasons.”

Painting  subjects  that  range  from  landscapes,  portraits,  and  figures  to  still lifes, wildlife, cowboys, and Native  Americans,  he  is  proficient  in  many  mediums  but  prefers  oils.  “Oil  painting  is  a  medium  that  is  forgiving,”  Afsary says. “It is easily corrected, if  something  needs  to  be  corrected  or  changed. This is not always possible  when using watercolor.” When Afsar y picks up his brush,  he  transcends  the  qualitative  use  of  his  colors,  and  his  brushwork  is  masterly.  He  becomes  totally  absorbed  in  what  he  is  creating,  attempting  to  convey  the  depth  of  his  feeling  for  the  subject.  “I  experience many moods and many  feelings,”  he  says.  “Some  days

Northwest Rendezvous Group. There  is  more  to  Afsary  than  his  art  however.  He  has  three  children: James, Bonnie and Jacqui and  two  grandchildren  McKenna  and  Keaton. But, like most professionals,  he is best known for his art.  Afsary’s  paintings  have  found  homes  with  art  lovers  throughout  the world, collectors who place great  value  on  his  work.  That  little  boy,  who  was  so  fascinated  by  the  artist  he watched at work in the shop window so many years ago, has clearly  mastered his craft. Vicki Stavig is editor of Art of the West.