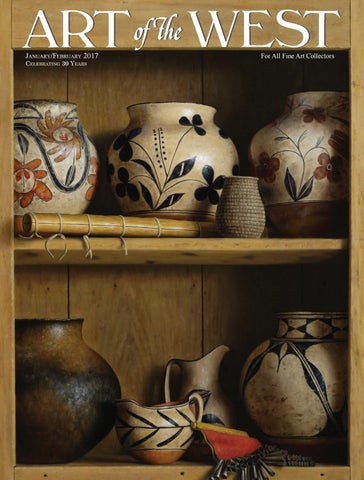 Tranquil Yellow Light, oil, 12˝ by 19˝ “Tranquility is what I felt, when I came across the print in this painting.”

The Dream Continues By Vicki Stavig

illiam Acheff is every bit as clever, colorful, and captivating as his still life paintings, which have earned him numerous awards, including two at the prestigious Prix de West Show, the first in 1989, the second in 2004, as well as the Masters of America West Purchase Award in 1998. A conversation with this talented artist reveals a commitment to creating art that is beautifully provocative, along with a delightful sense of humor. Acheff’s talent reaches far beyond painting. He has remodeled several homes in Taos, New Mexico, where he has lived since 1973. He has a 26

pilot’s license and a barber’s license. In fact, he still cuts his own hair, as well as that of a few friends. And years ago he had a bit part in a play that starred Ethel Merman. His stories are endless—and told with great enthusiasm—but Acheff is best known for his paintings, still life scenes that feature Native American artifacts and that go far beyond the traditional. Asked what he was like as a child growing up in a small town in Alaska, Acheff responds, “I remember myself vividly. I was creative and curious about things. I drew, and I liked airplanes. I have two

brothers—one older, one younger. And my mother said I always had big eyes.” When Acheff was just 5, his father, who, Acheff says with a laugh, had moved to Alaska when he was 21 “to get away from his mother,” moved the family to San Francisco, California. “It was the first time I saw a TV and a flush toilet,” Acheff says. “In Alaska, we had a hand pump for water in the kitchen, and we had an outhouse.” Within three years of that move, young Acheff began drawing the cars he saw parked on the streets outside the windows of his home.

From Warrior to Welfare, oil, 26˝ buy 34˝ “Sharp’s Ration Day On The Reservation was the inspiration for this painting. When I was painting the print, I noticed the bison skull hanging over the door of the office. I wondered if Sharp added that as a sign of why the Indians needed rations.”

In high school he studied drawing, painting, and commercial art. ‘I just gravitated to it,” he says. But, he adds, his plan was to study math and go on to college, specifically to Stanford. His school counselor, however, suggested that he study art. Acheff did neither. “When I was about 10,” he says, “I saw “Lust For Life” with Kirk Douglas playing Vincent Van Gogh. It was a great movie, but the message was that of a starving artist. I didn’t think artists existed any more, and I didn’t want to be an art teacher.” So it was that, two weeks after his high school graduation, Acheff

enrolled in barber’s school, fully intending to eventually own and operate a high-end men’s salon. What did his parents think of his career choice? “They always supported me, because I had so much enthusiasm,” he says. “Mom always said, ‘Whatever you do, I just want you to be happy’. I had started cutting my own hair when I was about 12 and used to cut friends’ hair in high school. I just had this creative energy.” After completing his barber studies in early 1966, Acheff worked for a barber for a year, before moving on to a fancier operation. “I hoped to work for a celebrity stylist,” he says, pref-

erably with Jay Sebring who, at the time, was the top men’s hair stylist in the area (and who was murdered in 1969, along with Sharon Tate and two others, by Charles “Tex” Watson, a follower of Charles Manson.) Meanwhile, Acheff was cutting hair and, a self-described “health nut,” he was working out regularly at a local gym, which led him to a bit part in his second acting role. (His first was in a play during high school.) When the man who was to play a boxer in “Call Me Madame,” which starred Ethel Merman, backed out, Acheff said, “Hell, I’ll do it,” he recalls. “And I did it.” The scene had

no lines; Acheff, as a championship boxer, merely stood silently as Merman pinned a medal on him. But it was an adventure he recalls fondly. A couple years later, he met another celebrity, one who would change his life forever. While cutting the hair of a man with a strong northern Italian accent, Acheff learned he was an artist. His name was Roberto Lupetti and, after the two men talked about art for a while, he invited Acheff to join the drawing classes he taught every Tuesday. “That was it,” Acheff says. “Boom! That was the beginning. I still have the first still life drawing I did in his class. Then he wanted me to come and paint. I started painting with him five days a week and cutting hair two days a week. I just loved doing it. I studied with him for six months and took my work to him for the next couple of years, and he would critique it.” Lupetti was impressed with Acheff’s dedication, as he soaked up everything the elder artist told him and taught him. “He said that teaching me was like putting a carrot in front of a donkey,” Acheff says. One of the things Lupetti told his young student was, “It doesn’t matter how much you get for your paintings in the beginning; it matters only that you are painting.” Later, he suggested that Acheff do 10 paintings, take them to a gallery, and tell the owner he wanted $50 for each. The owner, however, offered only $20 each, so Acheff left and took them to a gallery in Sausalito. That owner bought one for $50 and took three on consignment, and Acheff’s paintings began to sell. In 1973, he headed to New Mexico with the intent of meeting a dealer in Santa Fe but, when he called the friend who had set up the meeting, the friend said the man had died the day before, “so I went to Taos,” Acheff says. “It was perfect for painting.” It was also the perfect place to connect with other artists, including Ray Vinella and Walt Gonske. Acheff had been painting what he describes as “kind of European still lifes” that included fruit, silver pitchers, and This Page - Music and Good Smoke, oil 26˝ by 10˝ “I stretched and primed this canvas from off-sizes of stretcher bars and set it aside, knowing that I would eventually come up with an idea for it. One can imagine a relaxed, fall evening.” Opposite Page - Peaches, oil, 40˝ by 30˝ “I had this painting in mind for 30 or so years. I acquired the Curtis photo 10 or 12 years prior to painting it. I seemed to always be painting something else when peaches were in season; perhaps I just wasn’t ready.”

ceramic vases. In Taos, however, he began to focus on Native American artifacts and quickly gained a strong following. Still living in Taos today, he says, “I felt supported here. There’s a creative atmosphere here. It was an easy place to work. There is a silence, a stillness that causes you to kind of come out. All of a sudden the focus is on yourself.” The focus of Acheff’s work continues to be Native American still lifes, often featuring beautifully crafted pots. “I used to borrow them from a dealer friend, but now I have about 100 pots of various sizes of my own,” he says. Asked about the difficulty of arranging his still lifes, which is an art in itself, Acheff downplays the challenges, saying, “I realized I needed to get my arrangements right—balanced. Sometimes I just put pots in a row; I love them that way. But, honestly, it’s intuition.” That intuition eventually led Acheff to include in his still lifes reproductions of artwork and photographs from books. “The first time I did that, I realized I could tell a story with the photograph and the artifacts,” he says. “Then I started using deceased artists’ prints.” One of his favorites, Acheff says, is a still life he finished last summer that includes a blackand-white poster of Georgia O’Keeffe on a Harley Davidson. “I wanted to make it contemporary,” he says, adding that, when he noticed O’Keeffe was wearing Levi jeans, he painted the tag red. “To me, it’s one of my greatest pieces, one of my greatest ideas. “I’m going through some changes in how I want to paint, what I want to paint, and what I want to say. I want to do different things; I want to paint contemporary themes that relate more to today. A lot of artists today tell stories and then they make a painting; collectors like that, but I hate it. Art has to have an element of mystery. Leonardo’s Mona Lisa is the great mystery in the world. You don’t need a full-page description of a painting, because that’s laying it out. Viewers should create their own connections to the painting; that’s art. I want the painting to speak for itself and for viewers to develop their own feelings for it.” Acheff says he doesn’t paint as “feverishly” This Page - One For Four-Legged Creatures. The Other for Two-Legged Intruders, oil, 42˝ by 16˝ “The 22 rifle in this painting belonged to my great aunt, who grew up in Montana in the 1880s and ‘90s. I remember seeing it behind her parlor door, when I was about 6. This painting was a bit challenging—which is a good thing—and I was happy with the results. Since I paint from life, I built the cabinet to set up the artifacts.” Opposite Page - Artists, Levi’s and Harley Davidson, oil, 40 by 30˝ “This is a great photo of Georgia O’Keeffe. As I was painting the photo, I noticed the Levi’s pocket tag on her pants. Then the titled for the painting came to me. After a few days in Santa Fe (1929) Mable Doge Lujan summoned her to Taos. The Taos pot represents that moment.”

Navajo Dolls, oil, 12˝ by 16˝ “This was an enjoyable commission of a client’s artifacts. The skirt of the female doll was especially challenging, with the layers of mesh material.”

as he has in the past. Describing himself as “an obsessive remodeler,” he has bought, remodeled, and sold several homes over the years. “It’s a creative energy thing,” he says. “And I have two planes and a couple of Alfa Romeos that are hot-rodded up, but I’m not attached to anything I have.” He’s much more concerned with his art, with the ideas that continue to drive him to create paintings that include the unexpected. What the next few years will bring is anybody’s guess, as Acheff continues to chart new territory. Several years ago, award-winning artist Tom Lovell suggested that he try painting figures. “I do have ideas for figure pieces, but I just haven’t done them yet,” he says. “I feel like I haven’t conquered still lifes yet. I want to explore different avenues, contemporary themes. That’s where the happiness is, in following your own dream.” Vicki Stavig is editor of Art of the West. 32

Song of the Minarets

Pastel on Archival Board

From Field to Studio - Ever grateful for my office