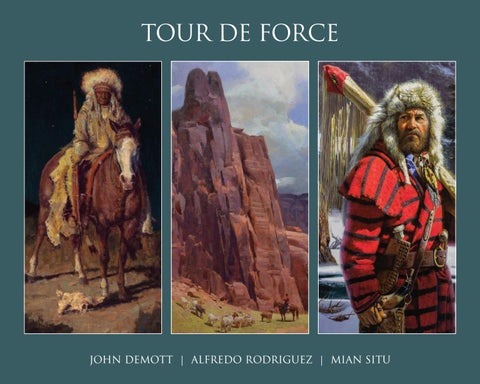 The term Tour de Force is described as an impressive performance or achievement that has been accomplished or managed with great skill. The words most certainly seem apt when used to describe the newest works of contemporary master artists John Demott, Alfredo Rodriguez and Mian Situ; three of the most recognized and successful western artists working today. Coming from such diverse backgrounds as they do, they nonetheless share an incredibly close bond, each using their art to explore and share the stories, experiences and perceptions of the people and places of the American west. An avid outdoorsman and storyteller of the American West, John Demott truly transcends the cliché of the Western artist. Born and raised on Southern California horse ranches, he has worked and lived the life of his artistic subjects and can speak the language of his experiences. His painting style, which he calls Historical Realism, allows him to paint his subjects in a realistic manner but with a painterly approach. As a young boy growing up in Mexico, Alfredo Rodriguez had childhood aspirations to become a painter. A self taught artist, today his rich and vivid images of the landscapes and diverse people of the west have brought him many awards and accolades and his paintings are found in major private and museum collections. Mian Situ’s award winning interpretations of the Chinese/American experience are just one part of his versatile artistic portfolio. A love for capturing historical western themes and American landscapes has been the impetus for his newest body of work; notably the beautiful and mystical vistas of Canyon de Chelly and the Navajo people that inhabit these lands. It is indeed our pleasure to bring you this new collection of rich and compelling western narratives. Maryvonne Leshe, Managing Partner

JOHN DEMOTT John DeMott’s newest collection of studio paintings includes subjects ranging from historic western scenes to iconic wildlife of the west. Raised on a Thoroughbred racehorse ranch in Southern California, DeMott has worked and lived the life of his artistic subjects and can speak the language of his experience. His art involves countless hours of research. Through his study of tools, wardrobe, accouterments, and history, he is able to capture detail and authenticity in his paintings. He notes, “As a storyteller of the American frontier, western art has been an important part of my life, and I am proud to be involved in the preservation of our great heritage.” Whether painting Plains Indians, trappers, cowboys, a grizzly bear in the wilderness or simply the beautiful Southwestern landscape, John DeMott can make the viewer keenly aware of time and place.

ALFREDO RODRIGUEZ A professional artist since 1968, Alfredo Rodriguez is widely regarded for his paintings that capture subjects including cowboys, Navajo and Plains Indians, mountain men, prairie and pioneer settlers as well as miners from the California and Colorado gold rush. Recently, his paintings have taken on a more intimate quality, as he focuses on people interacting with other, whether itâ&amp;#x20AC;&amp;#x2122;s an old man reading to his grandchildren or a father homeschooling his children. Rodriguez has lived in California since 1975, but continues to travel regularly to Indian Reservations and locations around the country researching, studying and painting studies for his major pieces. His paintings capture the dignity of the human spirit elevated by the majestic beauty of their surroundings.

MIAN SITU While multiple award winner Mian Situ is highly regarded for this Chinese figurative works and historic paintings of the Chinese/American experience, his newest studio paintings have been inspired by several trips to Canyon De Chelley, located in Northeastern Arizona. The area is recognized as one of the longest continually inhabited landscapes in North America, and has been home to primitive peoples living 2,000 years ago; from the Anasazi civilization of the twelfth century to the Navajo who have lived here for the last 300 years raising sheep and crops. Of his trips to the area, Mian says, â&amp;#x20AC;&amp;#x153;My first trip was with some twenty artists camping four nights down in the canyon. Since then I have revisited the area several times, drawn to the irresistible beauty. The colors of the sheer red cliffs are spectacular and almost overwhelming. The canyon is like a symphony of rock. Given the rich history of the area and people living there, the canyon is a source of great inspiration for my work.â&amp;#x20AC;?