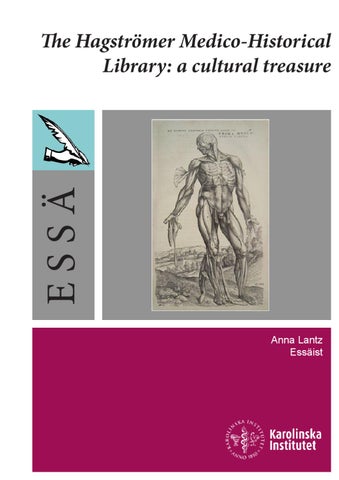 was one of Sweden’s leading anatomists and a student of Linnaeus. A cofounder of both the Swedish Society of Medicine and of the Karolinska Institute,1 he was also a collector of medical and scientific books, which he donated to the library of the Collegium Medicum2 in Stockholm. In 1816 the collection was moved to the Karolinska Institutet, after which time its library held the most important collection of medical and scientific literature in Sweden.3

In the famous anatomist’s honor, the rare books expert Ove Hagelin founded the Hagströmer Medico-Historical Library in 1997 in order to bring together the old and rare books and manuscripts from the Karolinska Institutet and the Swedish Society of Medicine. Since then it has been substantially enriched by several depositions and donations, among them the old and rare book collections from the Swedish Pharmaceutical Society and the Swedish Society of Dentists. While a large number of the volumes

were donated by distinguished Swedish physicians of the 18th and the early 19th century, some valuable private special collections were donated in the early 20th century. Today, the library comprises some 35,000 books, a gold mine of information for anyone interested in the history of medicine and related sciences, medical book printing, and medical illustration. The majority of the collection was published before 1860, with the oldest book printed during the incunabula period. Beautifully located in the Haga Park, near the Karolinska University Hospital in Solna, the library is not only frequented by researchers, it is the site of exhibitions and events as well. Within the collections are several first editions and manuscripts by Carl Linnaeus (1707– 1778), the famous Swedish botanist, physician, and zoologist. Included is his personal copy of the revolutionary Systema Naturae;4 printed in Leyden in 1735, the book presents Linnaeus’ system of classification of plants, animals, and minerals. On the title page, Exemplar Auctoris is written in ink by Linnaeus’ own hand. During the Linnaeus Year 2007, Hagelin went on a world tour, showing the book at, among other places, the National Museum of Natural History in Washington and the National Museum of Nature and Science in Tokyo, where he met the Japanese emperor—a distinguished biologist. Several manuscripts and first editions by Linnaeus’ disciples are also represented in the collections.

Among the library’s many herbal texts from the 16th and 17th centuries is New Kreüterbuch, written by Leonard Fuchs, one of the three German fathers of botany. It was printed by Isengrin in Basel in 1543. Richly illustrated, the book describes over 400 wild and 100 domestic plant species and their medical use. Colored by hand and accompanied by more than 500 woodcuts made by some of the best artists in Basel, it is considered one of the most beautiful herbal texts ever made. Fuchs himself (and three artists at the end) is depicted in full-length at the beginning of the book—the first time that illustrators were depicted and named in a printed book.7

Equally important is Andreas Vesalius’ Fabrica6 printed by Johannes Oporinus in Basel in 1543, marking the beginning of modern anatomy. The remarkably accurate text is accompanied by over 200 woodcut illustrations of the highest artistic and technical brilliance. Among the illustrations of bones, muscles, blood vessels, nerves, thoracic organs, abdominal viscera, and the brain are the famous 14 “muscle men” set against a beautiful panorama of the surroundings of Padua, where Vesalius was professor of anatomy. The library also holds the Epitome, a brief summary of the approximate 700 pages that constitute the Fabrica and printed in the same year.

Anna Lantz, EssĂ¤ist Anna Lantz is an Art Historian working in the HagstrĂśmer Medico-Historical library as an administrative officer, responsible for the Wessler-collection of ca 600 pictures, artefacts, and books related to odonthology.