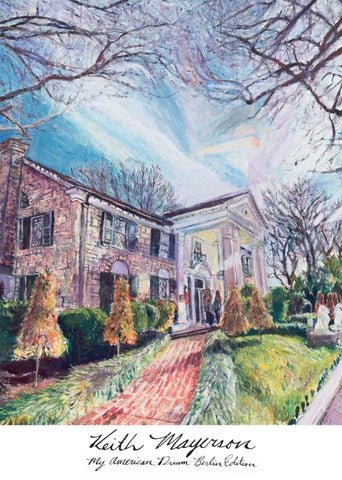 My American Dream is a decade long project of creating images in a p­ oetic nonlinear narrative that is both dreamlike (capturing dream space and time in installations that have larger intentions beyond the form and content of any singular piece) and the story of my own life with my husband in the larger cosmology of a United States and history that helped our life come about and to give us the freedom to be who we are and to help to others to hope and forge a positive and nurturing life full of beauty, love, and the pursuit of happiness. In the 21st century, I believe in a have your cake, and eat it, too-plan, combining the subjective beauty and painterliness of modernity with the cultural relevance and narrative pertinence of postmodernity. If you could have the emotion depth and formal nuance of a Rembrandt, married to the populism (and politics!) of a Warhol, maybe you can create something new. Growing up skiing in Colorado and going to the Denver Art Museum, the great wanderlust in painted landscapes of the Rockies by Germans like Ufer and Hennings would intrinsically have a strong influence on my artistic life. At home, I discovered European illustration and underground comics, and their closeness to Grosz, Dix, Die Brücke and more that would help give my vehicles their expression. Fassbinder influences me by his use of melodrama to get his audience involved in stories imbued with feeling. He used this tension as a seductive agent to have viewers empathize and have compassion for avatars who have journeys through discourse, with ideas of both Marx and Freud permeating their worlds. 100 years since Duchamp’s Fountain, I think we can circle back to the unconscious, to notions of transcendence, the ineffable, and the sublime. After Richter, I want to penetrate the picture plane at the same time that I want to keep the content of the Pictures generation. For me, my images are Proustian madeleines, aesthetic talismans to form thoughts and feelings from my own life into the image, like James Dean’s method acting, suturing his own biography into his characters’ lines. Elvis never wrote his own songs, but used the lyrics and mood of his chosen melodies to cull something deep inside generating a moving voice that spoke not just for him, but also allegorically for generations. Turner turned towards the light of God when gazing towards the sun, producing Kantian transfixes of

Romantic sublimes beyond the corporeal existence of his forms, ­Cézanne was able to project his unconscious along with his conscious brush when painting his Monte Sainte-Victoire thinking of his childhood with Zola. And the spirit of American modernity of Hopper, O’Keefe, Dove, H ­ artley, Burchfield, and Ryder dreams deep to my core, Leaves of Grass to my Walden Pond. Images of our America go beyond our current state of affairs back into the world of nature, our Manifest Destiny continues to guide us in the age of the National Parks Centennial, showing us, that if you aspire to do something new, turn to nature. Our great leaders, the heroes of civil rights, make great sacrifices to strive beyond a subjective and subjugating Patriarchal Order, to lift up the spirit and agency of all peoples resisting the reification of Capitalism and Power, rebelling against oppression, creating a voice for youthful generations wanting to make a difference. No one can really build a wall to keep people and life away from where all wants and needs to be. Borders, like artistic movements, are malleable glass ceilings that are made to be broken. Modernity continues to push through constructs by allowing our instincts, our synaesthetic feelings, to flow past how things might seem to be represented. When painting with a brush with oil paint you have the baggage of that history behind you, but you are also facing forward into the future. What other kinds of art can’t do as well, still, is make unconscious thought concrete and made visual within the plastic space of the picture plane—what leaks out (the ineffable, the uncontrolled, the ecstatic revelations, like Elvis’ gospel) become Gracelands not just of what can be, but where we can travel to become more human, sacred while embracing the profane.

On the Road: Andrew and Michelangelo in the James Dean Porsche at the Grand Canyon, 2016 Oil on linen 23 x 30 cm

Kimberly Marteau Emerson is a lawyer, civic leader, and advocate of the arts. She is involved in a wide range of international cultural events supporting museums, private collections, and artists in Berlin, and hosts United States cultural institutions in Germany. In 2016, Emerson curated an exhibition with emerging artists from Berlin and Los Angeles, and hosted a reception to honor the Berlin Biennale. Emerson is dedicated to human rights and integration efforts worldwide. She is a member of the Council on Foreign Relations, serves on the Advisory Board of the USC Center on Public Diplomacy, and is on the Board of Directors of Human Rights Watch. Keith Mayerson is a contemporary painter, known for his work depicting his­ torical figures, family snapshots, urban landscapes, and more. Frequently exhibiting his paintings in salon-style installations, Mayerson creates broader narratives out of the sum of his work, citing comic books as an inspiration and influence. Most recently, his work was prominently featured in the new Whitney Museum’s inaugural show, America is Hard to See. Keith Mayerson has exhibited his art in galleries and museums since 1993. His work is featured in the permanent collections of the W ­ hitney Museum of American Art, the Museum of Modern Art, New York, the Museum of Contemporary Art, Los Angeles, the Los Angeles County Museum of Art, the San Francisco Museum of Modern Art, the Cleveland Museum of Art, and the Columbus Museum of Art. Adam D. Weinberg is the Alice Pratt Brown Director of the Whitney Museum. During his tenure, the Whitney has presented major exhibitions on a range of artists including Yayoi Kusama, Glenn Ligon, Gordon Matta-Clark, Georgia O’Keeffe, Ed Ruscha, and Jeff Koons). In 2015, opened its new 220,000-square-foot building in the Meatpacking District with its acclaimed show America is Hard to See. Weinberg has curated exhibitions on artists such as Edward Hopper, Richard Pousette-Dart and Isamu Noguchi to Alex Katz, Robert Mangold, Sol Lewitt, and Terry Winters. Weinberg serves as a board member of diverse organizations, including the Andy Warhol Foundation for the Visual Arts, and Storm King Art Center. Ortrud Westheider is the director of the Museum Barberini in Potsdam, a private museum housing the collection of Prof. Hasso Plattner scheduled to open in January 2017. Previously, Westheider was the director of the Bucerius Art Forum Hamburg. Westheider has published extensively on German and American art and has curated major exhibitions on artists such as Max Beckmann, Hanne Darboven, Willam Turner, and Pablo Picasso. Furthermore, she curated the exhibition series 150 Jahre Amerikanische Kunst: 1800–1950. Currently Westheider is preparing a major exhibition on American art at the Museum Barberini, Von Hopper bis Rothko. Amerikas Weg in die Moderne, opening June 2017.

In collaboration with the Embassy of the United States of America