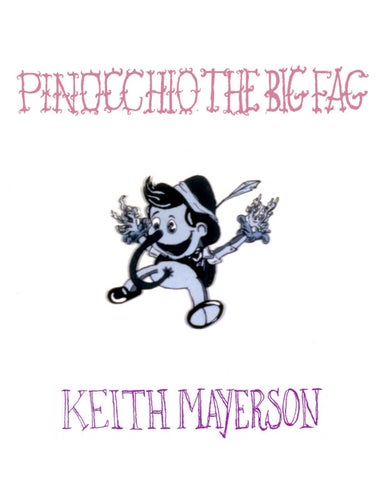 Pinocchio the Big Fag was second year thesis project as a graduate student at the University of California, Irvine in 1993—when it first premiered I had just turned 27 years old. I began by writing the script—coming from comics and theater I thought I would write a “bad Cole Porter-like musical”, and then transcribe this into a comic. But after drawing several pages, I realized how difficult (and long!) it would take to do this in time for my thesis, so instead decided to create images of my version of Pinocchio, as if my version had existed alongside the original C. Collodi version, and that some gay collector had collected the original illustrations from various tomes and animated versions and put them all together again. UCI at the time was a new program, Catherine Lord had come from Cal Arts and had hired and fired a bunch of folks—it had a very gender identity politics perspective, and many of my teachers were in the now famous 1993 Whitney Biannual. Lari Pittman, one of my professors on my thesis committee had mentioned, although he too was included in the Biennial (which I loved and was influenced by), that he liked art that “invited the viewer to think, not tell them what to think”, and coming from Semiotics and studying playwriting with Paula Vogel at Brown, I agreed. I had come out to my friends and family, but was really just starting to come into my own, and UCI helped (along with Lyotard and Derrida, who also taught there and I audited their classes) for me to mature intellectually, post Semiotics, and where I met my boyfriend, now husband, Andrew Madrid almost 30 years later. Pinocchio the Big Fag was, in part, my story but more than this the story of how I felt much of the LGBTQ community was like for my generation, growing up in the age of the AIDS crises, and the very much still developing (but thankfully aware) culture surrounding acceptance and tolerance of gay people. It was a dynamic time for art and culture, but also a terrifying one still as many were dying from AIDS. Semiotics had opened up ideas of language being power—and art languages as a part of it, and importantly, a generation of theorists (like Judith Butler and Eve Sedgewick, both very much on our minds) began projecting on how if language is power, how it is used to subjugate peoples but also to liberate them. There was much political art that was about power, and the timeliness of getting your point across importantly and stridently for the moment to help save lives and people and to bring awareness, and to “wake people up.” But I had the privilege of being a next generation, having the time and health to be able to want to make something nuanced, to bring about how narrative helps to create ideology, such in the case of children’s fiction and more. Pinocchio the Big Fag addresses much of my anxiety, but also intellectual and aesthetic pursuits at the time, striving to find love in a world of chaos, and to define for my own terms what it was to be gay in a moment, too, where “Silence=Death”, Queercore was emerging alongside new ideas of what it was to be, in Sedgwick’s recoding of the word, queer. Perhaps, in art also, it was a place where a Post Post-modernism might occur, where you could “have your cake and eat it too” making work that addressed the world outside of itself intellectually and politically, but also leave room for emotions, transcendence, and beauty. Pinocchio the Big Fag was my thesis show, but also my debut in the art world. My professors brought friends to see the show who told friends (including Dennis Cooper, who I eventually collaborated with on my first graphic novel Horror Hospital Unplugged), and it then traveled to the now famous and seminal gallery KIKI in San Francisco, ran by the infamous Rick Jacobsen (who sadly passed from AIDS relatedcauses, but whose gallery also showed many great artists). Nayland Blake and his partner brought Ann Philbin to see it—and although it was supposed to go to White Columns, Bill Arning generously acquiesced and allowed it to show at the Drawing Center for my NYC debut (where it was reviewed in the New York Times and also in Artforum), before it came back for an exhibition at the Richard Telles Gallery. I’m proud of the work still, and am very happy to assemble this book with my great designer friend Grace Pak for what is now serendipitously the 25th anniversary of its Drawing Center premier, on the occasion of the As If: Alternative Histories from Then to Now, curated by Giampaolo Bianconi (I’m grateful to Jay Gorney and Joel Wachs for lending their Pinocchio works to the show). Although I experimented with linear and more non-linear salon installs of the work in the various incarnations of its presentation, this is the first time the original script has been published alongside the accompanying images (that had, like bronze sculptures in a lost-wax process, previously stood in for the entire story they emerged from), and grateful for the Drawing Center to allow for the book to be presented alongside their exhibition. Keith Mayerson Riverside, CA March 2019

Artist’s Books 2019 James Dean: My Life in Pictures (graphic novel, in progress, to be published by Fantagraphics Books 157