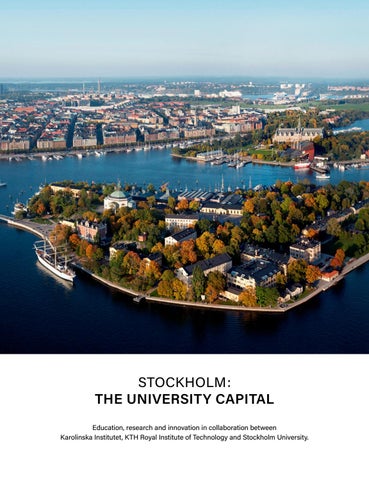 The three public universities are located in the Swedish capital Stockholm.

Karolinska Institutet Campus Solna and Campus Flemingsberg and throughout the regional healthcare system.

Collaboration, cooperation and Stockholm. Sweden’s capital is a hub for research, education and innovation.

he three public universities lo­ cated in Stockholm – Karolinska Institutet, KTH Royal Institute of Technology and Stockholm University – complement, reinforce and challenge each other in terms of education and research. Subject areas range from medicine, humanities and social sciences to science, technology and engineering. Together, we form a comprehensive university environment in the Stockholm region.

The fact that the main campuses of the three universities are in the vicinity of each other enables cooperation even more. Competence, curiosity and innovation are at the core of our work.

For the student or researcher who comes to Stockholm to learn, develop and explore, there is a Swedish smorgasbord of opportunities and disciplines available. Through close

cooperation, an interdisciplinary perspective is in focus when our universities work across university borders in a series of exciting and socially important projects. We offer research and education in areas such as the environment and sustainable development, health of the future, advanced basic research and artificial intelligence – to name a few expansive areas our universities work with in collaboration with industry, the surrounding society and international partners. A warm welcome to Stockholm! Ole Petter Ottersen, President, Karolinska Institutet Sigbritt Karlsson, President, KTH Royal Institute of Technology Astrid Söderbergh Widding, President, Stockholm University 7

Stockholm: The university capital The largest public sector universities in Stockholm – Karolinska Institutet, KTH Royal Institute of Technology and Stockholm University – complement each other and offer outstanding education and research environ­ments, strengthening the capital region and playing a central role in development at national and international level.

n collaboration we offer a comprehen­ sive university environment for research and education in the capital of Sweden. More than 4,000 researchers and 47,000 students across all scientific fields have chosen one of the three renowned institutions.

The capital is recognised worldwide for its commitment to sustainability. In 2010, Stockholm became the first city to receive the European Green Capital award from the EU Commission.

The universities in Stockholm have at their disposal 40 percent of the country’s academic research capacity and play a vital role in the development not just of Stockholm but of Sweden. The joint turnover is 17.3 billion SEK per year and the universities are significant employers with a combined staff of 15,000.

The Nordic region’s largest city and an economic centre of northern Europe, Stockholm is one of the fastest growing metropolitan areas in Europe and boasts many multinational corpora­ tions. Strong industries combined with world-class research make Stockholm one of the most knowledge-intensive and innovative regions in the world. Significant investments are made in research infrastructure in the region.

Stockholm is a cosmopolitan city and the majority of Swedes speak English. The capital region Stockholm stretches over 14 islands on the Baltic Sea coast, offering forests and beaches as well as an urban pulse. Some 1.4 million people call the Stockholm region home, with an inner-city population of 900,000.

Sweden, home to the Nobel Prize, has a long tradition and strategy of investing in advanced research. The pursuit continues. Through investments in research and the stimulation of innovation, the goal is to further develop a first-class research infra­ structure through tying academia closely to industry within a wide array of sectors. The aim is to accelerate the development of research and collaboration within many areas, for instance life sciences, healthcare, environment, communi­ cation, technology and chemistry among other areas.

A selection of collaborative efforts in Stockholm in which the three universities take part: • The University of Tokyo and the three Stockholm institutions – Karolinska Institutet, KTH Royal Institute of Technology and Stockholm University – are cooperating within a strategic partnership to achieve mutual benefits from academic exchange and collaboration in research and education.

The Stockholm region has presented a strategy to become the world’s most innovation-driven economy by 2025. Karolinska Institutet, KTH Royal Institute of Technology and Stockholm University are part of this innovation initiative.

• SciLifeLab, a national centre for molecular biosciences with a focus on health and environmental research. • Open Lab, a challenge-driven innovation community providing courses for professionals and master’s students, co-working space, and a conference centre. • Stockholm Science City works to strengthen the attractive environment for life sciences in Stockholm and to promote cooperation between industry, universities and healthcare.

• Stockholm School of Entrepreneurship, a global platform for inter­disciplinary studies that provides free courses, experiences and incubation for students and alumni of the following universities in Stockholm: Karolinska Institutet, KTH Royal Institute of Technology and Stockholm University, the University College of Arts, Crafts and Design, and the Stockholm School of Economics.

Sweden has a strong strategy of investing in academic research. In the capital Stockholm, the three public universities complement, reinforce and challenge each other within research. Together, they work across almost all academic fields and form a creative hub for innovation and development.

iversity and depth characterise the three public universitiesâ&amp;#x20AC;&amp;#x2122; research, with its dual focus on basic and applied sciences. An interdisciplinary approach as well as collaboration with partners are important parts of the research.

which is carried out in close collaboration with industry, public authorities, organisations and other centres of research and education around the world. Greater collaboration is significant for the knowledge transfer and societal impact.

In recent years, the universities have sharpened their focus on research in the fields of sustainable development, health of the future, advanced basic research and artificial intelligence

Researchers also contribute to knowÂ­ ledge transfer by giving open lectures, participating in public debates, and engaging with the media.

Karolinska Institutet, KTH Royal Institute of Technology and Stockholm University offer a wide range of courses and programmes to prepare their students for professional life. A strong connection between education and research ensures high quality.

he three public universities have come together in a unique collaboration to offer students a two-year master’s programme in Molecular Techniques in Life Science in the Science for Life Laboratory. The programme focuses on molecular techniques for disease therapies and diagnostic tools, coupled with sub­ stantial training in data analysis and bioinformatics. Stockholm’s universities are well known around the globe. They conduct several international projects and

cooperate with other top universities in the world. Stockholm’s premier academic institutions share the conviction that academic exchange and collaboration in research and education benefit not just the universities and their students, but also society. International students have long been attracted to Stockholm – one in five students who come to Sweden choose a university in the capital.

Karolinska Institutet ranks consistently among the top 50 universities in the world. Founded in 1810 as an academy for army surgeons, the institution is today a modern medical university with the vision to advance knowledge about life and strive towards better health for all.

he university accounts for the largest share of academic medical research conducted in Sweden and offers the country’s broadest range of education in medicine and health sciences. Research spans the entire medical field, from basic experimental research to patientoriented and healthcare sciences research.

With a close relationship to the clinical milieu, a well-established infrastructure and stable finances, Karolinska Institutet has all the prerequisites to sustain high-quality research and education.

Times Higher Education ranks Karolinska Institutet as the 40th best university in the world (2018/2019) and as number ten in the subject of Clinical, Pre-Clinical and Health (2017/2018).

In his will dated November 27, 1895, Alfred Nobel appointed Karolinska Institutet to award the Nobel Prize in Physiology or Medicine. This honourable mission is today executed 16

The Academic Ranking of World Universities lists Karolinska Institutet as number 44 in the world, number 19 in Clinical Medicine and number 5 in Public Health Sciences (2018).

MEDLINE®/PubMed® is a database of the U.S.National Library of Medicine.

Ò Up-to-date information about education and research at Karolinska Institutet can be found at ki.se/en

s Sweden’s largest technical research and learning institution, KTH is home to students, researchers and faculty from around the world dedicated to advancing knowledge and create a brighter and more sustainable future. KTH’s diverse areas of education and research include engineering, natural sciences, architecture, industrial management, urban planning, history and philosophy, social science, humanities and artistic research. The university as a whole is characterised by international integration. Cooperation and collaboration with the international scientific community, with the private and public sectors and with the surrounding community is fundamental for this integration. KTH participates in extensive international research collaborations, in educational exchanges and joint programmes with universities and colleges in Europe, the US, Australia,

Asia and Africa – all dedicated to advancing knowledge. KTH work with sustainable solutions and practical answers to tackle some of humanity’s greatest challenges. Serving society is part of the mission and KTH takes responsibility for the role of technology in societal development. For KTH gender balance is not just about equality, it’s also about quality in learning, research and results. To increase the balance among students and faculty a number of initiatives are in place. KTH is working for a future digital society where all citizens are able to thrive, act, participate, learn and develop by having the skills and technologies needed for development.

QS World Universities Rankings lists KTH as 104th university in the world and among top 50 in five subjects:

KTH will continue to focus on research and education for a brighter, more sustainable tomorrow. Contributing with the intellectual resources of students and researchers to create new approaches.

Ò Up-to-date information about education and research at KTH can be found at kth.se/en

tockholm University is characterised by its openness, innovation and a strong inter ­national profile. The university was founded to revitalise higher education in Sweden. Since its founding, close contact with the wider world and active exchange of knowledge and experience have been integral to this vision. The university closely combines edu­cation and research, with a strong focus on basic research. Researchers at Stockholm University are leading contributors to scientific and social development and participate as experts in both scientific and public inter­ national bodies, most prominently as members of the Nobel Prize committees that select the Nobel Prize winners each year. Five researchers from Stockholm University have received the Nobel Prize and a sixth has been awarded the Sveriges Riksbank Prize in Economic Sciences in Memory of Alfred Nobel. The university is home to excellent and

interdisciplinary research laboratories and facilites enabling research of the highest adacemic quality. The university has an ongoing commit­ ment to equality. An important step was taken already in 1889 when the university employed the first female mathematics professor in the world – she was also Sweden’s first female professor in any subject. Almost one in three professors today are women. The university has as many women as it does men among its doctoral students.

With a global perspective and through collaboration with others, Stockholm University contributes to the development of knowledge. Education and research in human science and science in the international frontline, as well as in interdisciplinary work, make this possible.

Ò Up-to-date information about education and research at Stockholm University can be found at su.se/english

The university strives to make know­ ledge accessible through dialogue and participation in public debate.

Three collaborating universities Stockholm is the university capital of Sweden. Karolinska Institutet, KTH Royal Institute of Technology and Stockholm University have a combined total of 47,000 full-time students and over 4,000 researchers working across all scientific fields. Our presence, strong research environments and effective innovation systems strengthen the entire Stockholm region. 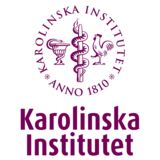