The Great Spas of Europe 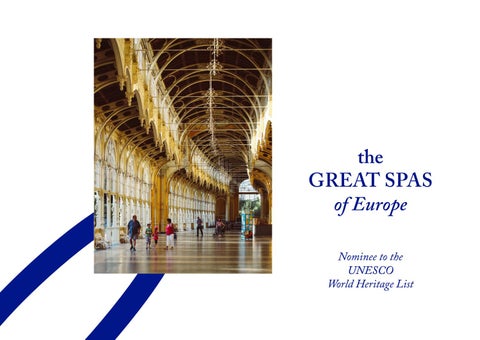 The Great Spas of Europe is a transnational series that is being nominated for inscription on the UNESCO World Heritage List. It comprises 11 exceptional spa towns across 7 countries*, and represents a unique cultural phenomenon and an urban typology without earlier parallel. The proposal for justification of Outstanding Universal Value includes criteria two, three, four and six. *C zech R epublic, G ermany, Austria, France, B elgium, I taly and the United K ingdom.

International Relations Department Ministry of Culture of the Czech Republic

The property provides exceptional testimony to the European spa tradition, a complex urban, social and cultural phenomenon that has its roots in antiquity but gained its highest expression from around 1700 to the 1930s. Each spa town developed around mineral springs, which were the catalyst for an innovative model of spatial organisation which included therapeutic and recreational landscape, dedicated to curative, therapeutic and social functions. These fashionable resorts of health, leisure and sociability created architectural prototypes and an urban typology that has no earlier parallel. They were pioneers of nascent modern tourism, and the only European settlement type to be in cultural competition with the great metropolises. Ensembles of spa buildings include pump rooms, drinking halls, treatment facilities and colonnades designed to harness the resource and to allow its practical use for bathing and drinking. ‘Taking the cure’, externally and internally, was complemented by related visitor facilities such as assembly rooms, casinos, theatres, hotels and villas, and spa-specific support infrastructure. All are integrated into an

overall urban context that includes a carefully managed recreational and therapeutic environment in a picturesque spa landscape. The Great Spas of Europe marks the greatest developments in the traditional medical uses of springs by Enlightenment physicians across Europe, including the pioneering of diagnostic medicine. As an ensemble of elite places in terms of scientific, political, social and cultural achievements, it contributed to the transformation of European society through the reduction of the gap between the social elite and a growing middle class. They hosted major political events and their special creative atmosphere inspired works of high-art in music, literature and painting that are of outstanding universal significance. Effective long-term care, economic and/or medical success, succeeded in controlling growth and maintaining an original purpose and enduring atmosphere. Their sustainable function as dependable curative venues for body, mind and spirit ensure their continued contribution to European culture, behaviour and customs.

The Great Spas of Europe is testimony to the exchange of innovative ideas that influenced the development of modern European towns from the eighteenth century to the early twentieth century. This exchange included pioneering urban planning and architectural prototypes, together with the development of balneology, crenotherapy, medicine, arts and leisure activities. The ideas influenced the popularity and development of spa towns and spa medicine in other parts of the world, and are characterised by an almost continuous ease of flow of such ideas across geographic and political boundaries, even in times of conflict. The Great Spas of Europe became centres for experiment, benefitting from, and contributing to, the eighteenth-century Enlightenment. This includes introducing radical change to the then prevailing attitudes towards science, medicine, nature and art. Developments within the nominated property influenced the early development of sea-bathing, climatic, and then recreational resorts (including gambling) throughout the world.

The Great Spas of Europe bears exceptional testimony to the conscious care for human health that developed around natural mineral springs. At the centre of this spa tradition is a philosophy of diagnoses and prescription, healthy diets and physical exercise that, together with exceptional hospitality, entertainment and leisure opportunities, combined as a prototype of nascent modern tourism. This tradition was born of a remarkable cultural and social phenomenon which flourished from the eighteenth century to the early twentieth century; and which continues to thrive today. The property embodies a ‘culture-creating’ tradition as places for the creation, reception and transmission of transnational trends and new values of the Enlightenment. This commanded a fresh conception of relations between European citizens, between classes, and also between men and women.

The Great Spas of Europe is an outstanding example of a specific settlement type which flourished from around 1700 to the 1930s. This is a new urban typology centred on natural mineral springs and devoted to health and leisure. This developed to include architectural prototypes that are spatially arranged according to the distribution of springs and the regime of ‘taking the cure’. The typical spa ensemble includes springs, pump rooms and drinking halls, bathing and treatment facilities, ‘kurhaus’, colonnades and galleries, hospitals and sanatoria, assembly rooms, casinos, theatre and concert houses, shops, hotels and villas, churches of various denominations, and support infrastructure which are set within a green environment of promenades, parks and gardens, pleasure grounds, rides and woodland walks. In combining architecture, innovative town planning and landscape design into the built environment both functionally, visually and economically, the property served as a model for similar spas, and spa architecture, in Europe and elsewhere in the world.

The Great Spas of Europe comprised politically neutral nodes in an international network of health and leisure. They became vectors of a transnational culture. Elements of the property are associated with, and directly linked to, social, political and cultural ideas that helped to shape European cultural traditions and ideals. As international meeting places the spas have been distinguished as regular hosts to prominent figures in the arts and humanities, and also to European rulers, politicians and diplomats, national elites and international high society. The spas reflect the climate of the Enlightenment where the former barriers between class and gender were relaxed, and religious freedom prevailed. As preferred resorts of composers and musicians, writers and poets, painters and sculptors, they were sources of patrons and inspiration for artistic and literary works of universal significance. Here, many original works were conceived, performed or exhibited for the first time.

Welcome to the Great Spas of Europe

The Great Spas of Europe 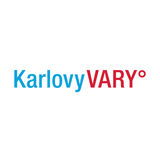