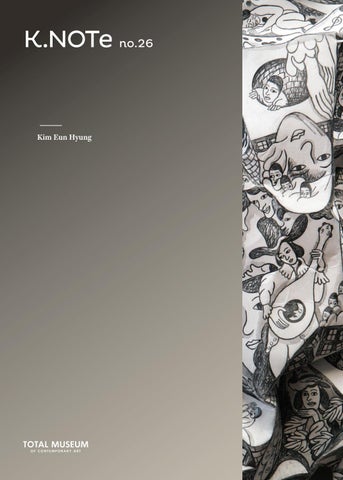 K.NOTe #26 A Very Subjective Appreciation of Artist Eun Hyung Kim’s Work Seo Jin-seok Director of Nam June Paik Art Center Modest Mussorgsky’s Pictures at an Exhibition At the OCI Museum of Art Eun Hyung Kim is exhibiting works he produced inspired by music pieces from Pictures at an Exhibition by Russian composer Modest Mussorgsky. Inspired by 10 drawings done by his friend and artist Viktor Hartmann, Mussorgsky composed this music in suites. Artist Eun Hyung Kim again interprets this music into visual images. The 10 drawings Hartmann made have different stories that have no connection with one another. Mussorgsky links the suite’s movements with diverse narratives in a way that depicts the viewer’s own progress through the exhibition. Embracing the concept of ‘promenade’ in music and using this as a form of musical prelude or interlude, he exploits this as a linking pin to unify the 10 movements. As in Flight of the Bumblebee by Nikolai Rimsky-Korsakov, a typical realistic piece of music, Mussorgsky very realistically depicts motifs appearing in Hartmann’s drawings, such as dwarfs, ancient castles, chicks, witches, and catacombs, enabling viewers to associate such images through music. Mussorgsky represents what he saw and felt through music. Unlike other movements of episodes, the promenade movements are very subjective and have nothing to do with any story. Nevertheless, the promenades are not composed for a functional purpose to bridge each episode based on realism-based melodies. In this sense, movements depicting pictures with different narratives come from the conscious mind whereas the promenade 4

movements portray images generated from his relationship with Hartmann submerged in his subconscious. The promenades are of significance not only as a linking device depicting the viewerâ&#x20AC;&#x2122;s progress through the exhibition but also as pieces with a distinctive creative value derived from the relationship with his friend Hartmann. What Mussorgsky really represents is memories of his friend Hartmann, not a mere depiction of images through music. Pictures at an Exhibition was perhaps for Mussorgsky a means of healing the grief of losing his friend. Eun Hyung Kim portrays Mussorgskyâ&#x20AC;&#x2122;s 10 music pieces in concrete, realistic paintings. Kim converts the music he received and responds to it by using his sense of hearing but uses his sense of sight rather than simply depicting objects with the use of vision. The senses and a process of converting such senses generate a gap in the process of the brainâ&#x20AC;&#x2122;s perception, and the subjective primal self in the subconscious world intervenes in the gap. Kim attempts to arouse a response between the body and heart through synesthesia or a blending of the senses, not through a single sense. He employs impromptu, swift brush strokes to represent subconscious, primal subjectivity rather than conscious, logical renditions. Kim creates black-and-white images by using unintentional, unconventional, and unrestricted lines like musical melodies. Hartmann who produced pictures, Mussorgsky who depicted them in music, and Eun Hyung Kim who recreated the music in paintings are all creators who use various mediums for expressing different times. Music is created from the relationship between Hartmann and Mussorgsky while painting is produced by the relationship between Mussorgsky and Eun Hyung Kim. Kim exploits his own art to establish an ontological identity between the individual and the other, himself and society, moving beyond relational aesthetics and making a new formal attempt to fuse music with painting. 5

Memories between the unconscious and conscious In his previous work Designing Egos, Kim illustrated the images of his personal memories based on impromptu conception, not intentional rendition. He raised images submerged in his inner self to the surface in a state where he was unconscious of his actions. This is akin to the automatism the surrealists often adopted to get a glimpse at the true nature of the unconscious world, a way of chronicling classified images aroused from the subconscious mind. Unlike the surrealists, Kimâ&#x20AC;&#x2122;s images summon his own memories staying between the primal ego (the world of the unconscious), the domain of instinct, and the ego. His black-and-white images seem quite similar to the products in the style in which one tries to understand his value of being, the laws and nature of the world through performances filled with thoughts and ideas rather than practice free from all thoughts and ideas. That is to say, Kim generates images in an ambiguous situation where the boundaries between narratives are formed in the flow of linear time and images are formed fragmentally in the flow of non-linear time. He seems to find his own identity in chaotic memories, mixing abstract and representational images. His brushwork drawing is a long stroke in a moment that reinforces this ambiguity. Structural modeling to appreciate unconscious memories Images drawn out from the middle zone between the conscious and unconscious are re-structuralized to forms in multi-dimensional space from two-dimensional arrangements. Unlike automatic twodimensional drawing relying on quick creative strength, Eun Hyung Kim attempts elaborate, intentional compositions in his modeling work. His sculptural installations are not predictable threedimensional structures but non-structural organic forms. They have numerous flections and multi-dimensional creases. As if crossing borders and flying through time, bridging fragmented memories without restriction, Kimâ&#x20AC;&#x2122;s sculptural work seems to combine with a gravity field distorting space and time, departing from the x and y axes of three-dimensional space. His memories are blended in 12

multi-dimensional creases, and space and time are entangled. Each scene is linked to another scene very intentionally through this entanglement, which objectifies his personal memories more consciously. The artist says he derives this workâ&#x20AC;&#x2122;s form from the human brain. The human brain is a sphere of infinite complexity and like a micro-cosmos. He concretely represents his memories with the motif of a human brain. Concretizing infinite complexity in the domain of rational consciousness, the artist arranges unconscious drawings in his two-dimensional work while attempting logical reconstructions in his three-dimensional work, thereby stabilizing his anguish and sharing this with others. His identification with the other All figures in Kimâ&#x20AC;&#x2122;s paintings look similar, as if the same person. Although they are in different spaces and times and convey different narratives, they depict the same figure in one society and one time. By identifying himself with figures in his work, Kim removes the distinction between others and himself. Like a mirror reflecting self through relation with others, an individualâ&#x20AC;&#x2122;s identity is evaluated and defined by others. As man is by nature a social animal: we cannot escape the bondage of collectivization. We feel satisfied when prized by others more than defining our values by ourselves. Kim explores his presence within others, linking himself to others and removing a sense of isolation and loss in society. The artist draws out chaotic memories from the boundary of the conscious and unconscious, and reassembles them in a relationship with others on a two-dimensional surface. His memories concretized in his ego are carried to the public after being arranged as objectified images. This process is similar to how psychiatrist Jacob Levy Moreno, founder of psychodrama, worked in psychotherapy and psychodrama. In psychodrama a patient reveals oppressed feelings acting as he pleases without a script. A psychodrama is a 14

means for one to investigate and gain objective insight into his life as others see him, and a way to heal social adjustment disorder. When a psychodrama addresses a public subject, it is referred to as socio-drama. Likewise, Kimâ&#x20AC;&#x2122;s work presents figures in relationship with others, establishing his identity in a social group. The artist produces drawings objectifying images derived from his memories in relation to other peopleâ&#x20AC;&#x2122;s perspectives. Through this repetitive practice he sets up his identity in society and depicts his own subjective future.

Kim Eun Hyung Kim Eun Hyung has continued with complex work where experimental drawings in diverse forms are combined with music, art, and performance. His recent solo exhibitions include: “Drawing of a Procession,” the Seoul Museum of Art‘s SeMA Hue Art Wall Project; “The Butterfly Dream” at the Corner Art Space; and “Modest Mussorgsky’s Pictures at an Exhibition” at the OCI Museum of Art. He studied at School of the Art Institute of Chicago and Seoul National University, and also has participated in diverse residency programs at home and abroad including the Skowhegan School of Painting & Sculpture (2007), International Studio & Curatorial Program (2011), and SeMA Nanji Residency Creative Studio (2015).