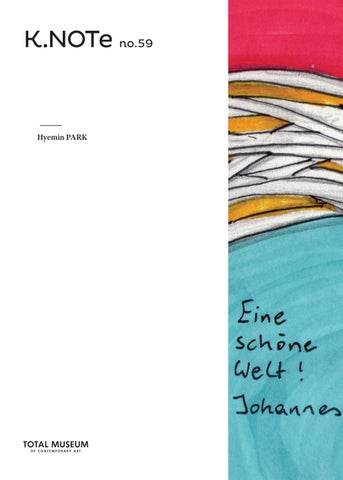 K.NOTe #59 I the people Thoughts on the work of Hye-min Park Roger Orwell University of the Arts London More or less seven years ago the United Nations named the 31st October 2011 â&#x20AC;&#x153;Seven Billion Dayâ&#x20AC;?; and arbitrarily and symbolically a small selection of documented births were chosen as emblematic of the moment the number of human beings alive passed 7,000,000,000. Of course no-one actually knows the exact population of this planet on any given day with that much accuracy. However, UN statisticians made reasoned probabilistic predictions that the mark would be passed in late October 2011, and that the seven-billionth child would, following these predictions, be born in Northern India. In October 2018 the figure for global population stands at approximately 7.6 billion. There are many staggering facts and figures to be discovered about the number of people who live or have lived on Earth. One might be that approximately 12,000 years ago it is likely that there were only one million persons alive on the whole planet; another may be that at the start of the Christian era (our date zero) the population was approximately 300 million; and further to that, in the mid-19th Century, there were still less people living in the whole world than the population of contemporary China. When Marcel Duchamp was born in 1887 the global people count had reached around 1.5 billionâ&#x20AC;&#x201D;one fifth (20%) of what it is today. If we dwell on and in these numbers, even briefly, the ramifications and extrapolations for art and connected life are infinite and also in their way predictable: not simply action or inaction, but re6

action; not simply re-action, but inter-action, relation, distribution, communication, exchange. The people had to be the medium. In the work of Hye-min Park I would argue that they clearly are. Moreover, because of this mass-engagement, the spaces and places of art would inevitably be challenged. While it often comes to rest in a typical (or sometimes atypical) art space, Park’s work has been/is and will be seen and heard all over and around—from outside Peckham library in London to the makeshift encampments of Korean financial down-and-outs, from an abandoned London Children’s hospital ward to the isolated Go-Si-Won, student ‘swotbox’ in Noryangjin, Seoul and then back to central Vienna and the previously unknown stories of ‘ordinary’ folk. Peripheries, the overlooked and the under-seen are often named and given the stage. And with this comes a ‘doing’ more than a ’making’. Recording the marks of life is never a simple task. I could say (and I have elsewhere) that there is no present, only historiography and dreams (the past and its future), where documenting, coding and inscribing will produce another layer of intriguing slips and fuzz in our attempt to understand the moment, its so-called presence and our tolerance of time. Stories are made of other stories; wherein the inter-text becomes and behaves more like a ‘textile’ than a clearly linear and orderly establishment of fact. A postcard (as Jacques Derrida has rightly told us) never arrives at its destination, but is read and re-read along the way. Visually not verbally, representations or drawings mark as much of ‘us’ on the paper or the page as they hold steady an image of the thing they are ‘meant’ to be. And we must remember, always remember with our memories, that in reading Park’s objects, whether they are digital projections of documented performance 7

or small square black and white paintings of Ikea inventory, we are undoing, re-doing the done and undone past. This is emphasized in her textual works—narratives put down ‘on paper’ that are not ‘dead’—not when they take on space and time and matter in a public forum. Furthermore, artworks that make direct convergences with living, breathing other—passer-by, audience, visitor and viewer—must be political. The polis, (whether it is London, Berlin, Vienna or Seoul) is populated and of its people. They are never silent. There are laws and there are regulations, customs and cultures—there to be broken in revolt in the quest for emancipation, or flouted (as the philosopher Paul Grice has called it) with the clear intention of carrying meaning far and beyond the surface conventions of these strictures, yet still inside understanding and truth. This becomes more complex with the intercultural and transnational dialogues salient in Park’s work with and within multi-ethnic populaces; and this might seem an obvious trope for an ‘international’ artist and itinerant who has worked far from ‘home’. But it is noteworthy to look back to her early works in collaboration with the Flyingnet collective in Seoul; and there (as already mentioned) I would suggest (all) ready is the voice of the outsider and the diverse called into the spotlight to be noticed and embraced. With a de-centering of the object and the primacy of event and document, the question of aesthetics will soon come. If art is anything it is left and lives in the space behind language and beyond interpretation, perhaps even adrift of idea and conceptualization. And this is an intriguing problematic for the artist who works with the ‘everyday’ life event as a material. There is always a danger of over-layered irony and the consequence of never being taken seriously. This may start as an intention, but once released to an audience is hard to control (if that is an aim). However (and Park has suggested this to me) there is a productive and perhaps useful 8

distinction to be made, or at least proposed, in the notion of a ‘beautiful idea’. If philosophy is (and it is at least etymologically) the ‘love’ of ‘knowledge’ or ‘understanding’ of ‘telling it like it is’, then (and Plato and many others would not disagree) the beautiful idea doesn’t seem such a long way off. The difficulty for the artist is not creating it, for that—if we believe Deleuze and Guatarri (and we should)—is the job of the philosopher; it is locating it and showing it. I would argue that Hye-Min Park is looking—and looking in the right places—in the actions, minds and particularly the words of us, the inhabitants; and the pleasure, interest and beauty for us the audience is to see ourselves (subject and inter-subject) being sort after and cherished and formed and re-formed. I have calculated in an immensely unscientific and speculative manner that the number of words ever spoken by homo sapiens is 22 x 1018: 22,000,000,000,000,000,000. That is a lot of words. One of the sources for the foundation of my arithmetic was the Population Reference Bureau (www.prb.org), and another the online source, www.worldometers.info/world-population). On its website there is a digital ‘clock’ of sorts, a predictive counter, which turns on the second with a pulse of 2.5 new lives, showing the world population move inexorably upwards. I the people to the things that are were & come to be. 1

©Roger Orwell, all rights reserved. Not to be duplicated or published without the author’s permission.

HPARK Travel Hyemin Park, the artist runs HPARK Travel. The artist creates hypothetical cities including 'Sui(China)', 'Siola(India)', 'Ciellelure(Africa)', designs tour programs and the travel guide book to experience the transformation of culture in Korean society(Chinese,Indian and African culture shown in Korea). The designed tour program is a real program that offers cultural experiences of China, India and Africa in Korea guided by the artist. She also directed and filmed the tour program visiting 'Sui(China)' and 'Siola(India). This tour package is directed to feel like one is traveling in China and India but is a fictional documentary that was filmed in Korea.

Ordinary Nations Since 2016, Park has worked on a project entitled <Ordinary nations> through multiple workshops with a specific group of people to develop the theory of an imaginative nation, a utopia where everyone would desire to live. Park asked questions on immigration, education, industry and environment, politics and administration as well as development and distribution and then grouped students together with similar ideals. Each team discussed their opinions and made decisions based on a mutual agreement.

Ordinary Nations: The Republic of Widoscience, 2016

Berlin Clearance Exchange, 2016 Hyemin Park had run a project called ‘Clearance Exchange’ (‘clearance’, as she was about to leave London/Berlin for Korea). In this project the artist invited exhibition visitors to take part in a ‘trade off’, in that the visitor/participant was asked to exchange his/ her drawing of the artist’s item with the actual item.

Let's eat together <Subongdabang> was an unoccupied space for ages and recently converted into an alternative art space and cafe to communicate with local people and share the cultural experience through various art projects. As a member of not only subongdabang organizers but also a participating artist, the artist presented an on-going project <Lets eat together>. Drawings featured images of food ingredients and during the exhibition period each individual piece was exchanged for the actual food ingredient drawn on the canvas. When all food ingredients were gathered, she invited local people to share the food she cooked by using exchanged food ingredients

Hyemin PARK As a flaneur, Hyemin plays and strolls around a city, observing the city, inviting people to take part in her works and collaborating with people engaged in the course of her performance. These passers-by become a critical part of her work through which they both collaborate to create something artistically meaningful and memorable. Without their personal responses and actual participation, Hyemin’s work would not go any further or move towards the next stage. She graduated from Ewha Womans University, BA in Fine Art and Chelsea College of Arts and Design, MA Fine Art. She has participated in various exhibitions and residency programs including Out of Place>(KF gallery, Seoul, 2018), <2017 Jeju Biennale: Tourism>( Jeju Museum of Art, Jeju, 2017), <Way of leaving>(Space CAN, Seoul, 2016), <Summer Love>(Song-Eun Art Space, Seoul, 2015), <System planning>(Sangsangmadang, Seoul, 2015). http://hparkart.com

Roger Orwell Roger Orwell is a British writer and tutor, currently based in London UK, teaching within the language depart at University of the Arts London. He is a qualified theoretical linguist and phonetician with an interest in the philosophy of language and ‘the borders’ of verbal language and communication, in particular its interface with the visual and material arts and society. Hs research interests grew closer to contemporary art between 2007 and 2012 when he studied Culture and Humanities at the London Consortium (Tate, ICA, Architectural Association, Science Museum, Birkbeck - University of London).

The Site Before Your Eyes, waste from exhibitionsite, dimensions variable, 2017