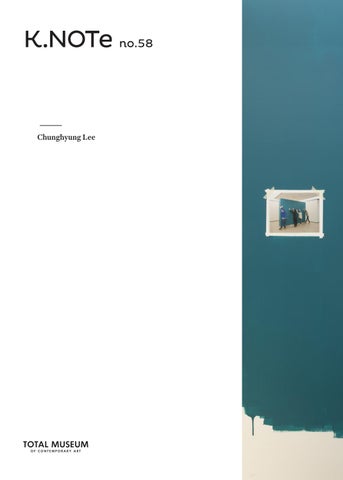 Haeun Lee Intern Jisu Hong, Sooeon Jeong Designer Flaneur Sponsor Arts Council Korea Date of  Publication February 2019 © Author and artist The reproduction of the contents of this magazine in whole or in part without written permission if prohibited.

The site before your eyes, waste from exhibitionsite, dimensions variable, 2016

Chunghyung Lee’s work begins with labor. Ironically, he illuminates the field of non-artistic labor through forms of artistic labor and activities. Here, non-artistic labor refers to labor directly relating to one’s subsistence, otherwise a labor of maintaining conditions for living before one’s artistic endeavors. In order to sustain his life as an artist as well as a certain standard of living, Chunghyung Lee plays additional roles besides the artist, breaking through this struggle of life. Another one of life’s struggles – a form of non-artistic labor – is that of preparing an exhibition space. Although he is also an artist himself, Lee engages in this form of wage labor, helping curators and other artists behind the scenes. Lee’s non-artistic labor goes beyond mere subsistence and is in close relation with his artistic activities. The environment and conditions he experiences - and its time and space – come into focus before his eyes, the area of the artist’s labor. Non-artistic labor, which usually serves as background of ‘artworks’ and ‘exhibition,’ becomes the origin or inspiration resulting in the artist’s ‘artworks’ and ‘exhibition.’ The artist explains this concept that includes his works within the framework of the term “fine work.” “Fine-work” is a compound word that consists of “fine art” (which stands for artistic activity) and “work” (which stands for the physical and mental labor of living). Through his own conceptual compound “fine-work” the artist attempts the disparate union of art and non-art and guides us towards potential questions raised from these boundaries. Lee aims questions at the conditions in which art is separated from non-artistic labor, although they are in fact all inside the broad category of contemporary labor. His work 6

deconstructs and discloses the conventional conducts and process of legitimization of contemporary art, including the exhibition in which art generally comes to operate (a matter of space that defines an aesthetic experience) and in which the behind the scenes design of space becomes integral. The work deconstructs and subverts values like the sublime and asks fundamental questions such as what happens before (or right before) art comes to exist. Chunghyung Lee documents the non-artistic labor that exist in the periphery of an exhibition from two perspectives - from the eye of an insider based on his experiences and sensitivity, and from the eye of an outsider who observes the situation as an objective phenomenon. The artist then forms a unique border between the two and visualizes them into an artwork based on his own unique filtering method. His own filtering method, classification and recombination of documented and collected things, re-envisions non-artistic labor from its existing context and expands it by complicating other issues and contexts. Through this process the elements of labor are deconstructed from the art event (which is framed by a particular time and space), and extended beyond its regular focal points. In the context of one artwork or exhibition, multiple events cross spatial boundaries between the exhibition and its construction. Lastly, Leeâ&#x20AC;&#x2122;s work visualizes the moment and boundaries where art and non-art once existed separately under the category of labor. The artistâ&#x20AC;&#x2122;s works, broadly speaking can be categorized into three parts. Firstly, the artistâ&#x20AC;&#x2122;s parodying of non-artistic labor, is a series of photos titled Study of crossing area. This collection of documentary photos explicitly exposes the areas where non-artistic labor occupies a particular time and space. The collection of photos, which explicitly reveals a scene of non-artistic labor, is the documentation of a moment where the neutrality of exhibition (generally represented as the white cube) is established. An effect 8

of the sublime, actually accumulated by the hours of labor put behind an exhibition, is presented as a metaphor within the dust that covers the space. Serving as the origin of creation, the artist also reveals it to be the result. By randomly sorting through images and arbitrarily recombining under specific keywords, he tracks various layers of art that may appear from these relations, expanding towards other contexts as well. This attitude of Chunghyung Lee seems to look for a point of interpretation that informally multiplies within the relation and coupling structure of arranged images, like Aby WARBURG's Mnemosyne. Secondly, with objects collected from a construction site is the Left Over series. The method applied in order to collect records from the scene results in different qualities from Study of crossing area. At construction sites the artist collects and newly recomposes the leftovers of which life has expired from its original purpose. Collecting, arranging, or newly composing the leftovers that sustain on its surface, the form, pattern, or texture that reminds us of its original context, this activity newly connects different places, times and purposes in the present moment. In this manner, gestures that link and compose a context that the objects imply - the act of connecting traces from different times and spaces - leads to questions about systems of exhibition or the space of the exhibition itself. The act of documenting and collecting in Chunghyung Lee’s two projects mentioned above are different from a museum archivist’s work – an archivist projects certain meanings, collecting existing data with fixed points of view, making selections to form a complete database. His rather, is the “unfinished project” and “another point of departure” of which Hal FOSTER says is the artist’s task of performing the contemporary archive. In this context the archive made by Chunghyung Lee’s collection and documentation justifies its role as materials that share these newly appearing ideas from a contemporary perspective. Lastly, in works that express (in his oeuvre) the greatest expansion and transformation in terms of its material, format and scale, is the 10

Wall of Museum series. Hinted in its title it clearly touches upon a topic that runs through his works, by focusing on the ‘wall’ of exhibition space. As is common knowledge, a wall is both background and a condition of establishing a particular area as a space. A corresponding identity is then imparted onto this established space. The wall that identifies a place and a system may also separate an uncertain part of the context and incorporate it into the space along with its specific identity as ‘museum.’ Eventually, the space (museum) gives the identity because of its strong authority and grants a specific subject the status of art. The wall has important implications in terms of exhibition strategy—a new type of spectatorship towards artworks. In order to impart a sense of ‘neutrality’ while looking at artworks Alfred BARR applied a then new form of display format in the exhibition space - the white wall in the Museum of Modern Art, New York. Spatially expressing the concept of an autonomous field of art, the wall is necessary to form a white cube, the neutral space that provides a critical distance in experiencing modern artworks, as well as separating it from its from social context. In this way, coming closer to the symbolism of the “wall” Chunghyung Lee challenges the custom of exhibition and exhibition space - where visual-based aesthetic experiences are formed -, while questioning the operational format of the exhibition (space) represented as a white cube. When I first encountered the works of Chunghyung Lee, I tried to find what aspects of non-artistic labor appearing in his works were really aiming through the many different contexts. But the more I tried to comprehend through various contexts under the keywords of ‘labor,’ such as society, geography, politics, culture, and history, I was still perplexed. After a long conversation with the artist I could then understand what he targets and the questions he raises through his labor in the artworks. Based on the attitude of institutional

critique, his artworks illuminate forms of contemporary labor (activities) that bestow the authority of ‘art’ through non-artistic labor, raising questions and doubts on the conditions that grant such a status to art. In our time, in the name of “creation” we embrace all productive activities of men as a part of economies and industries - including art. Then, in such a situation where is the point where art earns its special status as differentiated from other labor activities? In fact, under the broader concept of labor art is just one amongst other forms of labor. It might be impossible that only art is differentiated and wins special status (although there are other opinions defining the value that contemporary art should pursue). When the border between artistic labor represented by “fine-work” (the artistic labor that Lee states through non-artistic labor) and non-artistic labor collapse, and when one’s individual life is accepted as it is, then another form of artistic value might newly be activated. Thus by witnessing the moment where subsidiary, underappreciated, subordinate things become art, we can realize another perspective in understanding art and society.

A wall that resembles the shape of a sculpture, dimensions variable, 2018

Chunghyung Lee Born in 1983 in Seoul, lives and works in Seoul. ChungHyung Lee received his Ba in ceramics at Hongik University and obtained his MA in sculpture at the same school. He held his solo exhibitions Fine works at Space Willing and Dealing in 2015 The site before your eyes at SongEun Artcube in 2016 and also participated in other exhibitions including The dictionary of Evil at Gangwon international biennale in 2018, Summer Love at Song-Eun Artspace in 2018, Revolution will not be televised at Arko Art Center, Night tigers at SeMa storage in 2016, Seoul babel at Seoul Museum of art, diversity of Democracy and Artistic Imagination for the public in Asia at Acc, Gwangju in 2015, Dream Society at Seoul Museum in 2015, and more. As a job, Lee works on consturuction, installation and design works for exhibitions, which allows him to have much experience of exhibition making and art work production. Based on them, Lee's work question what art is in the gap between art and life based on labour, how art and exhibition is conditionized in exhibition enviroment

The Site Before Your Eyes, waste from exhibitionsite, dimensions variable, 2017