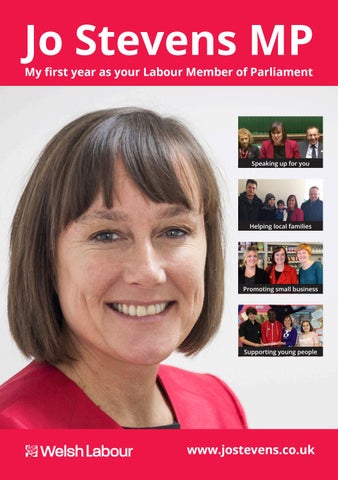 Speaking up for you

Dear neighbour, It is a year since you elected me to serve as your Labour Member of Parliament for Cardiff Central. The year has flown by. Iâ&amp;#x20AC;&amp;#x2122;ve been involved in as much as I can here in Cardiff Central and in Parliament. In this magazine, my annual report to you, I wanted to share a bit of what Iâ&amp;#x20AC;&amp;#x2122;ve been up to and how I have been representing you. If you need my help with any local or personal issues, please get in touch or come along to one of my surgeries. Details of upcoming surgeries are available at www.jostevens.co.uk/surgeries or by phoning 02921 329 736. I will keep working hard in Cardiff Central and in Parliament to be your strong voice, represent you and get the best deal for our community.

My Year in Numbers The most common casework issues:

weeks as your MP

I sat on the Business, Innovation and Skills select committee from June December 2015. The committee scrutinises Government policy and reports on issues such as productivity, the steel crisis, higher education and the digital economy. I used my experience as a former director and business owner to put government ministers on the spot about their lack of support for jobs and students. I’ve been lucky enough to have been picked ‘out of the hat’ twice to ask the Prime Minister a question. My first question was to ask the Prime Minister if he cared about the shocking 1665% increase in food bank use since he took office. The second was about extending ground-breaking Welsh Government organ donation legislation to England.

put s y a alw l l ct i e l w e “I s I wa ll sp . t s r fi I wi d n a you I made my first speech in the House of Commons on 4th June 2015. As is traditional, I talked about my predecessor MPs and some of the highlights of Cardiff Central including our traditional dish of chicken curry half and half on Caroline Street! One of the Government’s flagship bills this year has been the Trade Union Bill. This attack on working people is illegal, illiterate and illiberal and Labour MPs have worked hard to fight it. I was on the Bill Committee, challenging the bill line by line and proposing amendments. A campaign by Labour MPs and Lords, and Trade Unions, has led to the Government climbing down on some of the key aspects.

In July I voted against the Government’s Welfare Reform and Work Bill. I do not believe you elected me to support cuts to benefits for disabled people, and those with serious longterm illnesses, like cancer, and over 4300 families with children who relied on tax credits. In January I spoke as the Government attempted to scrap maintenance grants, which help the poorest students afford to go to university. Not only this, but they used a ‘backdoor’ method to try to avoid a debate and a vote in the House of Commons. My Labour colleagues and I saw what they were doing and insisted on having our say.

In December Parliament voted on whether the UK should conduct air strikes in Syria. I voted against air strikes because of a lack of strategy co-ordinated through the United Nations to defeat ISIL/Daesh, and a lack of strategy to deal with the humanitarian crisis and postwar reconstruction. In January I was appointed to Labour’s Shadow Front Bench as Shadow Justice Minister and, Shadow Solicitor General. I challenge Government policy on justice issue, particularly prisons and probation, question Minister regularly and help to direct Labour Party policy on these issues.

In the Constituency Information Fun Day

In February I held my first Information Fun Day with Jenny Rathbone AM. Representatives from a range of organisations joined us in Llanedeyrn to provide advice. We were also joined by Communities First and Groundwork Wales for creative play and craft activities. We will be hosting another event soon - keep an eye out on my website for details.

Small businesses make a huge contribution to our local economy, and I’ve enjoyed working with them. I spoke in Parliament about the Slow Food movement after I was introduced to it by Penylan Pantry. I am working with businesses on City Road who want to promote the area as a ‘food quarter’. Charcutier Ltd, a Roath market favourite also won a national BBC award.

I have visited 11 schools this year, meeting over 500 pupils. I’ve been introduced to school councils, grilled on what I do as an MP, asked to say hi to Ed Miliband and visited a reconstructed First World War hospital. Visitng schools is one of my favourite MP jobs. I’m always inspired by the enthusiasm and curiosity of the next generation of political minds!

nk Supporting the foodba th collection at Tesco in Roa

With the Alsharki family, who I helped to reunite after they were forced to flee their home in Syria

er pick in Taking part in a litt yn Pentw

Speaking at a rally against the Trade Union Bill

Meeting refugees at a housing project in Adamsd own

Jo Stevens: My first year as your Labour Member of Parliament for Cardiff Central