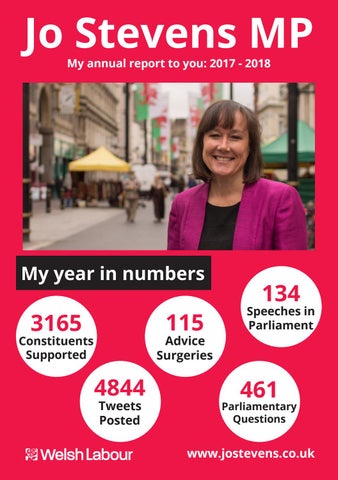 My year in numbers

Hello, This is my third annual report to you as your Labour MP. Thank you for re-electing me last year with an increased majority. I am very grateful to you for all your support. Thank you to everyone who voted last year and please do make sure you are registered to vote. We didn’t expect a general election last year and you never know when another one may happen! It takes a couple of minutes and you can do it online at: www.gov.uk/registertovote I am your voice both here in Cardiff Central and in Parliament and I will continue to be your open, accessible representative. I produce a monthly email newsletter with up to date news about my work on your behalf, here and in Parliament. Following new data protection laws recently introduced I have to ask you to actively consent to receive my email newsletter (even if you previously signed up to receive it). If you’d like to receive it, please email me at jo.stevens.mp@parliament.uk with the heading ‘NEWSLETTER’ and I will add you to my newsletter mailing list. You can also follow me online via social media and contact my office any time using the details below. I’m here to help.

Heading Towards Brexit? We’re now 30 months on from the EU referendum and still no clearer about what the Government’s plan is for the country and our future after 29th March next year. Since triggering Article 50 in March 2017, it has failed to produce any clear strategy and time is running out. When I voted against triggering Article 50 in Parliament, I said I was doing this because the government was starting negotiations with no clear plan, contradictory statements and a threat to European partners about counterterrorism and security co-operation, unless a satisfactory trade deal was reached. I said at the time that this was a high-risk strategy and could potentially result in no agreement at the end of the negotiation period, with us leaving the EU with no deal. That prediction has turned out to be pretty accurate and it’s why there is a growing call for a second public vote on whatever deal the Government eventually manages to negotiate. With my Labour colleagues, I fought hard to make sure that Parliament would get a proper, meaningful vote on the deal at the end of negotiations, despite the Tories opposing it. I will continue to fight hard to make sure that you get your say too, either through a general election or a public vote on the final deal, which also includes on that ballot paper, an option to remain as a member of the EU. Why am I doing this? Because it’s what I have always believed is best for our city, country and future. And it’s what the majority of Cardiff Central residents have been telling me on the doorstep,

in my surgeries, at workplaces, in our Universities and on the streets ever since you elected me. Every week I see local residents concerned about the impact Brexit will have on our lives. I see EU citizens who are partners and parents of British citizens, uncertain of what their residency status will be in just 6 months’ time. I’ve met university students who have just started their study year abroad who don’t know whether they’ll suddenly need a visa or lose entitlement to healthcare halfway through their placement. I’ve met doctors, teachers and other workering people important to our lives and the economy who are leaving the UK now, unable to wait any longer to know their fate. I’ve met small business owners, across every sector, who don’t know whether they’ll be able to keep EU citizens who they currently employ, or whether they will be able to continue trading across Europe. My Cardiff Central Brexit survey reinforced those views. You can read the headline results on the back page. I have repeatedly challenged the government on their lack of strategy and incompetent approach. In debates and speeches, questions to ministers, at rallies and across the media. I will keep fighting for what matters to you.

Celebrating harvest at the Highfields Allotments annual prizegiving in Cyncoed

At Gassyâ&amp;#x20AC;&amp;#x2122;s pub in Cathays, following its redevelopment by owners Stonegate

Sharing my work with pupils from Cardiff Schools during Parliament Week

Campaigning to save live music venues with performers and the Musiciansâ&amp;#x20AC;&amp;#x2122; Union

Last year I was elected to the Digital, Culture, Media and Sport (DCMS) Select Committee. The job of the Committee is to scrutinise the performance, policy and topical issues that this Government department is responsible for. This year we have held inquiries into sports governance, doping in sport, alleged racism at the Football Association, pay discrimination against women at the BBC and the impact of Brexit on the DCMS sector. Our highest profile inquiry has been into Fake News and the impacts of social media which attracted global coverage.

I believe we should make it easy as possible for people to vote so I have introduced a Bill in Parliament to bring in automatic voter registration. This would see people automatically registered when they are issued with a national insurance number, and data from other government departments used to keep the register up to date.

We uncovered evidence about large scale data breaches involving Cambridge Analytica and Facebook as well as breaches of electoral law by some of the Leave campaigns in the 2016 EU Referendum and foreign interference in elections here and in the US.

Did you know that over 1 million people are missing from the electoral register? The overwhelming majority of them are young people, and those living in rented accommodation where there is a high turnover of residents. In Cardiff Central, the people most likely not to be on the register are students and young people renting in shared properties.

With three universities, the College of Music and Drama and the Open University here in Cardiff Central, higher education and students are a main focus for me. The future of our worldclass research and teaching here in Cardiff is a vital part of our city, giving us a global reputation and students here the opportunity to learn from some of the best minds in the world. Our university sector is under attack. Brexit obviously poses huge threats to research collaboration, UK government ministers have been caught trying to interfere with teaching and the marketisation strategy continues. I actively supported university staff at Cardiff in their pension dispute with Universities UK raising this and many other issues affecting students and universities in Parliament over the past year.

A large amount of my casework relates to Home Office issues – lost passports and documents, visa refusals, delays, mistakes, inhumane policy and sometimes, just straightforward incompetence. It’s very clear that years of austerity and civil service cuts are impacting badly on people’s lives. Add Theresa May’s ‘hostile environment’ policy and the result is people on the receiving end of wrong decisions and delays with their lives in limbo. Home Office staff are overworked and under pressure and they are likely to have to process some type of application from around 3 million EU citizens in the UK on top of this because of Brexit. I regularly raise cases, issues and bad policy in Parliament on behalf of constituents and groups working with refugees and asylum seekers and I’ve pushed for a change of policy relating to unaccompanied children who arrive in the UK having fled conflict, but who are then forcibly returned when they reach the age of 18.

In November I visited refugee camps in Bangladesh where nearly a million Rohingya people, the majority women and children, who have fled horrific sexual violence, torture and genocide in Burma, are living. Almost a year on, the refugees nervously face the threats of monsoons which will place the camps at an even higher risk of disease and destruction, along with political challenges for aid agencies and a continuing lack of any realistic plan for their safe voluntary return to Burma in the future.

I led a debate in Parliament on the issue and have pushed the Foreign Secretary to publicly call for the Burmese military to be prosecuted in the International Criminal Court. I was also able to praise the work of our Bangladeshi community in Cardiff who raised over £40,000 for the refugee relief effort.

Cardiff hosts more than 400 major events a year – civic, political and royal - as a UK capital city. On top of the UK government funding cuts to our Police force, it costs an additional £3 million a year to police those events. I’ve been pressing for us to have capital city funding just like the Met Police in London have.

Government funding is not forthcoming for transport in Wales. Rail electrification was cancelled from Cardiff to Swansea and no other improvements have been signed off. I’ve also questioned the Welsh Secretary multiple times about when the government will commit to the desperately-needed redevelopment of Cardiff Central Station.

The Save Womanby Street campaign led to a law change in Wales, bringing in the Agent of Change principle, which protects live music venues from future developments nearby. I have cosponsored a Bill to bring in the same law in England and worked with a Scottish Labour MSP to do the same in Scotland. I’ve raised our grassroots campaign with Ministers, in Select Committee, at conferences and right across the media.

Brexit survey I asked for your views on Brexit - how you think the government is doing with negotiations, what is important to you and what you think the UK should do next. Here are some of the key headlines from what you told me:

Your priorities - The Top 3

I asked you what you thought the UK’s priorities should be in the Brexit negotations. This is what you told me:

Almost 80% of people who completed my Brexit survey rated controlling immigration from the EU • Being able to trade with EU to Britain as the lowest countries without charges or priority tariffs applying to goods and services (65.3%) • People from EU countries currently residing in the UK to be granted permanent leave to remain (56.2%) • British citizens being able to travel to other EU countries without needing a visa (29.6%) (Percentages of respondents who voted each issue as important or very important)

What should Britain do next? Leave the EU with no deal Try to make a limited, trade-only deal with the EU

Reverse its decision and stay in the EU