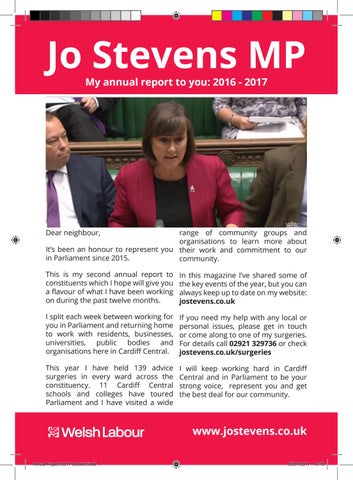 range of community groups and organisations to learn more about Itâ&#x20AC;&#x2122;s been an honour to represent you their work and commitment to our in Parliament since 2015. community. This is my second annual report to constituents which I hope will give you a flavour of what I have been working on during the past twelve months.

In this magazine Iâ&#x20AC;&#x2122;ve shared some of the key events of the year, but you can always keep up to date on my website: jostevens.co.uk

I split each week between working for you in Parliament and returning home to work with residents, businesses, universities, public bodies and organisations here in Cardiff Central.

If you need my help with any local or personal issues, please get in touch or come along to one of my surgeries. For details call 02921 329736 or check jostevens.co.uk/surgeries

This year I have held 139 advice surgeries in every ward across the constituency. 11 Cardiff Central schools and colleges have toured Parliament and I have visited a wide

I will keep working hard in Cardiff Central and in Parliament to be your strong voice, represent you and get the best deal for our community.

My most common casework issues:

Over the last year:

The issue you contacted me most about this year was Brexit. Thank you to the nearly 2000 people who called in, phoned, wrote, emailed, sent messages on Twitter and Facebook and let me know your views. I am currently running a constituent survey to find out what you want to see from the Governmentâ&#x20AC;&#x2122;s Brexit negotiations. See the back page for information about how to share your views. Annual Report 2017 Booklet.indd 2

Brexit Brexit has completely dominated the past year; from the referendum campaign, to the result and all the division throughout and since. The result came as a shock to many Cardiff Central voters, a significant majority of whom voted to remain. Since the result, we have seen confusion, and the lack of preparation, clarity or plan from the Government which is creating huge uncertainty for us all. This is particularly the case for EU nationals living in Cardiff Central who still do not know what their residence status will be following Brexit. I campaigned strongly to remain, voted to remain and resigned as Shadow Secretary of State for Wales, and from the Shadow Cabinet, so that I could vote against the Bill that has given the Prime Minister the permission to trigger Article 50. I could not endorse triggering Article 50 when there were no guarantees about protecting single market access, employment, environmental and consumer rights, security and judicial safeguards and the residency rights of EU nationals here. And no guarantees for the people of Wales, never mind a seat at the negotiating table. I could not stay silent on the basis that to speak was being anti-democratic, while the Prime Minister takes us towards a brutal exit with all the damage that will cause to the people and community that I represent. While serving as Shadow Secretary of State for Wales, it reinforced even more strongly to me what Wales will lose from exiting the EU without the guarantees

that are needed. We are net beneficiaries of EU funding to the tune of ÂŁ245 million annually. Over the last ten years, EU funded projects in Wales have helped support nearly 73,000 people into work and 234,000 people to gain qualifications. Those projects have helped to create nearly 12,000 businesses and 37,000 new jobs. 68% of our exports go to EU countries and parts of our farming and food production sector rely almost exclusively on the EU market. The single market is the lifeline to our manufacturing industry in steel, automotive and aerospace as well as to our farming and food production sector. So the Prime Ministerâ&#x20AC;&#x2122;s unilateral decision that we will leave the single market was something I couldnâ&#x20AC;&#x2122;t accept. It was a matter of principle and conscience to me that I must represent the majority of my constituents so I voted for numerous amendments to the Bill and ultimately, as no amendments were secured, against the Bill itself. Although Article 50 has now been triggered, that will not stop me from challenging the Tories to make sure we secure the best outcome possible in the national interest.

Jo Cox Just before the EU referendum, my friend and colleague Jo Cox MP was murdered outside the library in her constituency where she had been holding an advice surgery. Jo’s assassination by a right-wing extremist, amid a darkening climate of intolerance and negativity, has had a huge impact across the country, but particularly for my Labour colleagues and I who knew Jo and worked closely with her. I spoke about Jo, her values and achievements at several events to honour her life. Thank you to the many constituents who contacted me to express their sorrow and have supported the Jo Cox Foundation set up in Jo’s memory.

WASPI Campaign The Women Against State Pension Inequality (WASPI) campaign has gathered pace and profile this year, fighting for hundreds of thousands of women born in the 1950s who were given no warning when Conservative Government legislation equalising the state pension age was implemented. Many women received little or no notice of the change. Some have been hit by more than one increase in the

state pension age. Many are suffering financial hardship with insufficient time to re-plan for retirement. I have worked closely with the WASPI campaign since being elected and in October I presented a petition in the House of Commons, signed by Cardiff Central constituents, asking the Government to implement some transitional help for the women affected. Labour put forward six proposals for transitional help. I will continue to support the campaign on behalf of the many women who have been unfairly treated by the Government.

Syria Civil war continues in Syria and 5 million people, a quarter of Syria’s population, have fled the country to seek safety and sanctuary. I voted against the air strikes on Syria last year and I have continued to press the Government to take humanitarian action to help people trapped there. In December I wrote to the Government urging it to send air drops of food and medical supplies to people trapped in Aleppo. Disappointingly, the Government has still not acted. A huge movement of communities and neighbours has sprung up to provide what we can for refugees coming to the UK, but this is insufficient. The Government needs to do more. The ‘Dubs Amendment’, which I voted for in December, meant that Britain was to take in 3000 unaccompanied child refugees. The Tory Government has since abandoned that commitment, turning their back on some of the most vulnerable children in the world.

What I spoke about this year:

Last year I was appointed as Labour’s Shadow Solicitor General and Shadow Justice Minister covering prisons, probation, sentencing and victims. Our prisons are in crisis with record levels of violence against prison officers, drug finds, self harm and suicide. Reoffending rates are stubbornly high and the probation service, two years after the Lib Dem and Tory Coalition Government’s reckless privatisation, is creaking. I have recently joined the cross-party Justice Select Committee and will be continuing my work scrutinising the Government’s justice policy and performance. From October until the end of January I served as Shadow Secretary of State for Wales and a member of the Shadow Cabinet. This was at a crucial time for Wales, when the Wales Bill was progressing through Parliament. Working with Labour colleagues in the House of Commons and the House of Lords, we secured a number of concessions from the Government to remove the worst aspects of the Bill. The Wales Act gives new powers to the Welsh Assembly and will change some of the ways the Welsh Government can make decisions. It was an honour to serve in this role and be a champion for the whole of Wales as well as Cardiff Central.

The Football Supporters (Access) Bill I co-sponsored this private members’ bill which would give supporters the right to have a say in the decision making of their clubs. The Steel Industry As a foundation industry, steel making in the UK underpins thousands of manufacturing jobs, particularly in Wales. Tidal Lagoons I have constantly pushed the Government to give the go-ahead for the first lagoon in Swansea, which would generate electricity sustainably and pave the way for future projects including in Cardiff. Child Burial Fees It has been a privilege to work alongside my Labour colleague Carolyn Harris MP who has led a powerful campaign for the Government to set up a children’s funeral fund so grieving parents don’t have the financial burden of a burial or cremation fee at such a difficult time. The University Sector after Brexit Cardiff Central is home to three universities and their futures matter a great deal to the many students and university staff who live and work here. With such an uncertain funding picture I will keep pressing the government to make sure our universities are able to continue their world-leading work.

I campaigned with local residents against a planning application which would have seen a new seven-floor student accommodation block built at Cardiff Met University’s Cyncoed campus.

Many people will have read about Bashir’s story. Bashir came to the UK from Afghanistan when he was 10 years old, after seeing his father killed by the Taliban. I helped Bashir and his family to stop him being forcibly removed by the Home Office to Afghanistan in October and I’m continuing to press his case to stay permanently in the UK, working with his legal team and family.

There are many existing concerns from residents in Penylan, Cyncoed and Llanedeyrn about issues including noise and parking, and I didn’t want to see these made worse by over-development at the site. I am pleased that Cardiff Council’s planning committee rejected the application and I’m continuing to work with local residents to find ways to improve the issues.

We presented a petition signed by over 14,000 people to the Home Secretary in support of his case.

Small Businesses I have been working closely with our small business community in Cardiff Central, holding small business ‘street surgeries’ and traders meetings.

Our small businesses are the lifeblood of our communities and local economy and make Cardiff Central the thriving and vibrant place that it is.

Bashir’s case raises a wider policy issue about unaccompanied refugee and asylum seeking children who have to re-apply for leave to remain in the UK once they turn 18, even though they have settled in the UK and made their lives here.

Brexit Survey Now that the Prime Minister has triggered Article 50, Brexit negotiations will be taking place over the next two years. I want to know whatâ&#x20AC;&#x2122;s important to you, and what you think should be the priorities in these negotiations. If you are a constituent of Cardiff Central, please visit jostevens.co.uk/brexitsurvey to share your views.