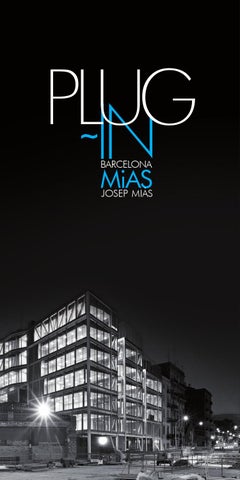 Plug-in-City, project designed in 1964 by Peter Cook, was an enormous framework in which residential cells could be plugged as a prefab city

In 2006, the recently created PUJADES 51-57 company – now known as DIAGONAL 477– conceived the idea of building a new office block in the 22@ quarter in Poble Nou, Barcelona, with the final purpose of selling it. At the time the area was undergoing a complete transformation that saw the proliferation of many innovative architectural projects. Despite the size of the company, and in view of this exciting architectural scenario, we decided to issue an open call for tenders. Josep Miàs’s project was declared the winner of the ensuing competition. At this point I do not intend to discuss his proposal as it is fully described within this book, but I would like to explain the main consequences that emerged from the analysis and understanding of the project. The design of the building suggested another type of property regime with box- based premises that could be rented individually. With the construction of so many corporate buildings and hotels in the area, the Plugin Building Barcelona emerged as a solution to the meagre offer of office rentals for small businesses or startups requiring a single, functional space: high-quality offices equipped with the latest infrastructures and services as required by the regulations and standards of the 22@ high- tech business district. The building, with all its unusual features, is now part of Barcelona’s architectural heritage. Although the decision to participate in the edition of this book was not taken on my own initiative, working on it as Co-Editor has been a very fulfilling experience. Constant liaison with Josep Miàs on various projects has created a bond of friendship between us and with his characteristic energy and drive he finally persuaded me to join this publishing project. In particular, and like other MiAS books, it is not so much a straightforward description of a building but rather a record of the design process which reveals how the project was drafted from its very beginnings. I hope you’ll enjoy it.

Portraits of the building

For my part, I’d like to draw attention to a picture which is reproduced in the centre pages of this book and which I mention here by way of a preview. The texture and appearance of the façades generates an optical effect that suggests a collage of two non-contemporaneous photos, each one developed in its own way, one in sepia and the other using the most advanced digital techniques. Using the rhetorical device of prosopopeia, the collage could be described as a “family picture”, where grandparents pose with their grandchildren and whose genetic code is shared, like in the case of the Plug-in Building and its surroundings. It is impossible to ignore the economic interests that underlie any property development, but promoters assume responsibility for and make a commitment to improving the urban landscape while ensuring the project is economically viable. We have attempted to respect these criteria in the Plug-in Building project. I would like to express my gratitude to all those people and companies that, directly or indirectly, took part in the project presented in this book, in particular Josep Miàs and his collaborators Adriana Porta and Carles Bou, who worked so successfully as project managers. Josep Miàs has also put a lot of effort into sharing all the specific and general project research material in his academic activities, lectures, press publications and award nominations. I’d also like to thank the initial construction company, UBACH 54, and OPROLER, who so carefully completed the building, and also the engineering consultants PROISOTEC, the structural consultants BOMA and the financial entity Banc de Sabadell. I will finish this foreword by expressing special appreciation for the commitment and dedication shown by the DIAGONAL 477 team during the execution and promotion of the project. Rafa Tous Godia Diagonal 477 CEO &amp; Co-Editor 5

The 22@Barcelona Project is an urban development in the Poble Nou neighbourhood, part of Sant MartĂ­ district. Poble Nou has always been an industrial neighbourhood, with its own particular, complex urban fabric, and somewhat cut off from the rest of Barcelona by the railway lines. The 22@Barcelona project represents the final transformation of these industrial areas. For over 100 years, Poble Nou was the main economic driving force of Catalonia and it was the last industrial neighbourhood in Barcelona. The 22@Barcelona project captures the historical, social and economic vitality of Poble Nou through the transformation of abandoned industrial premises into an area of high urban and environmental quality with new activities linked to knowledge and innovation. The 22@Barcelona project transforms 200 hectares of industrial land in Poble Nou into an innovative district offering modern spaces for the strategic concentration of intensive knowledge-based activities. This initiative is also a project of urban refurbishment and a new model of city providing a response to the challenges posed by the knowledgebased society. It is the most important urban redevelopment project in Barcelona in recent years and one of the most ambitious of its kind, with a high real estate potential and 180 million euros worth of public funds invested in the infrastructure plan. When the 22@Barcelona project was ratified in 2000, the network of infrastructures in the industrial areas of Poble Nou was found to be clearly wanting. To amend this situation the project established a new special infrastructure plan (PEI) to redevelop the thirty-seven kilometres of streets in the 22@ district and equip them with cutting-edge services and facilities.

Left. Aerial image of Poble Nou area in 1956. Below. Model of the project showing each level with its own orientation, volume and open space.

Aerial and general views of the project with its surrounding context, 22@ Poble Nou neighbourhood in constant transformation.

Central passages are outdoor sky cuts where air and light can reach the very core of the building.

Every effort has been made to contact copyright holders of images published herein. The published would appreciate being informed of any omissions in order to make due acknowledgement in future editions of this book. © of the edition, Josep MiAS ARCHITECTS &amp; DIAGONAL 477 SLU © of the works, their authors © of the photographs, their authors © of the texts, their autors ISBN: 978-84-616-1776-0 D.L.: B. 8.571-2013 All rights reserved Printed and bound in the European Union

978-84-616-1776-0 The design processes begin bringing city landscape into the building. Due to the nature of the location an intense study has focused on the previous conditions of the zone from the 19th Century till the current 22@ urban project. Special programmes and requirements have demanded the use of pioneering technologies and expertise, creating a new understanding between architecture and the city. JOSEP MIÀS. Architect for ETSAB Barcelona. Associate Architect at Enric Miralles’s office from 1990 till 2000. Principal of award-winning practice Josep Miàs Architects in Barcelona since 2000, commited to research and experimentation, and new approaches to technology, fabrication and construction. Known worldwide for works such as Fontanals Golf Club, Banyoles City Center Urbanization, Barceloneta Market, 22@Plug-in Barcelona Building, iGuzzini Barcelona Corporate Building among others. Winner of National and International Awards highlighting Archdaily Building of the Year Award, A+ Architecture Best Spanish Educational Facility Award, Catalonia Construction Award, City of Barcelona Architecture and Urbanism Award, Girona Architecture Award and Best Young Catalan Architect Award. Shortlisted at WAF Singapore Best Building of the Year Award. Nominated at European Union Prize for Contemporary Architecture Mies Van der Rohe Award. And Finalist at A+Architizer Award, Plataforma Arquitectura Work of the Year Award, City of Barcelona Architecture and Urbanism Award, European Prize for Public Space, European Landscape Prize, Catalonia Construction Award, Decade Prize, and FAD Award. Recognition for International Relevance by COAC and BarcelonaTech UPC. Works published and exhibited internationally in Barcelona, Madrid, Paris, Frankfurt, Zurich, Berlin, Kiev, London, São Paulo, Venezia and Singapore among others. Lecturer and Guest Critic in many International Universities and Visiting Professor at Städelschule Frankfurt and GSD Harvard Graduate School of Design Cambridge. Deputy Director and Architectural Projects Department Director at ESARQ–UIC from 2004 till 2006. Currently Professor in Architecture and Urbanism at ETSAB Barcelona, Visiting Professor at UNISS Alghero and Unit Master of Diploma Unit 16 and Senior Research Associate at UCL Bartlett School of Architecture London.

As for every project by Josep Miàs, the design process is begun from diverse angles and explorations from different optics or scales linking the city or landscape with the building and architecture in detail. Due to the special nature of its location, there is an intense study on the previous conditions and the evolution of the zone, from the roman agricultural plots, the 18th century industries to the 19th century Eixample and 22@ plan of the 20th and 21st centuries. All these strata together with new needs and technologies allow to understand how ideas, realities and the knowledge that has been gathered during the process, lead to a built architecture.