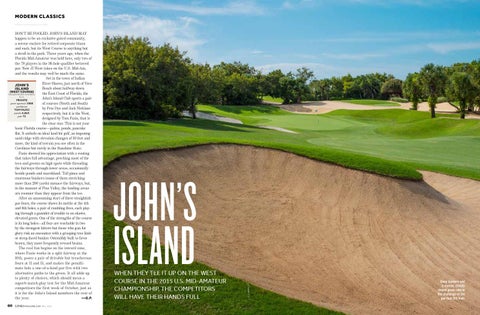 WHEN THEY TEE IT UP ON THE WEST COURSE IN THE 2015 U.S. MID-AMATEUR CHAMPIONSHIP, THE COMPETITORS WILL HAVE THEIR HANDS FULL

Deep bunkers and a narrow, steeply sloped green add to the challenge of the par-four 8th hole.

DON’T BE FOOLED. JOHN’S ISLAND MAY happen to be an exclusive gated community, a serene enclave for retired corporate titans and such, but its West Course is anything but a stroll in the park. Three years ago, when the Florida Mid-Amateur was held here, only two of the 78 players in the 36-hole qualifier bettered par. Now JI West takes on the U.S. Mid-Am, and the results may well be much the same. Set in the town of Indian River Shores, just north of Vero JOHN’S Beach about halfway down ISLAND (WEST COURSE) the East Coast of Florida, the INDIAN RIVER SHORES, FLA. John’s Island Club sports a pair PRIVATE year opened 1988 of courses (North and South) architect by Pete Dye and Jack Nicklaus TOM FAZIO yards 6,863 respectively, but it is the West, par 72 designed by Tom Fazio, that is the clear star. This is not your basic Florida course—palms, ponds, pancake flat. It unfurls on ideal land for golf, an imposing sand ridge with elevation changes of 50 feet and more, the kind of terrain you see often in the Carolinas but rarely in the Sunshine State. Fazio showed his appreciation with a routing that takes full advantage, perching most of the tees and greens on high spots while threading the fairways through lower areas, occasionally beside ponds and marshland. Tall pines and enormous bunkers (some of them stretching more than 200 yards) menace the fairways, but, in the manner of Pine Valley, the landing areas are roomier than they appear from the tee. After an unassuming start of three straightish par fours, the course shows its mettle at the 4th and 6th holes, a pair of rambling fives, each playing through a gauntlet of trouble to an elusive, elevated green. One of the strengths of the course is its long holes—all four are reachable in two by the strongest hitters but those who gun for glory risk an encounter with a grasping tree limb or steep-faced bunker. Ostensibly built to favor brawn, they more frequently reward brains. The real fun begins on the inward nine, where Fazio works in a split fairway at the 10th, poses a pair of drivable but treacherous fours at 11 and 15, and makes the penultimate hole a one-of-a-kind par five with two alternative paths to the green. It all adds up to plenty of choices, which should mean a superb match-play test for the Mid-Amateur competitors the first week of October, just as it is for the John’s Island members the rest of the year. —G.P. 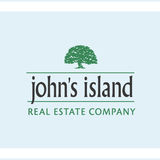