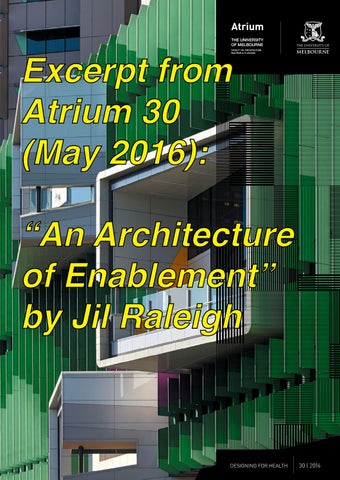 Atrium THE UNIVERSITY OF MELBOURNE

“An Architecture of Enablement” by Jil Raleigh

AN ARCHITECTURE OF ENABLEMENT: DESIGNING FOR DEMENTIA WITH BRIAN KIDD Jillian Raleigh

Brian Kidd (AM, LFRAIA) has 60 years’ experience in disability and aged care design, both in private practice and as a lecturer and researcher at the University of Melbourne, where he is now a Senior Fellow.

He is currently a member of the National Access Working Group of the AIA and a member of the Victorian Chapter of the AIA Access Committee. Having published numerous books, book chapters, articles, research papers, handbooks and design guides, Brian is currently working on the manuscript of his forthcoming book, “A Recent History of Aged Care.”

Despite this pervasiveness, the treatment and care of people with dementia remains principally palliative; recent advances in our understanding of this condition and its causes yielding results focused on preventative strategies or on slowing the rate of cognitive decline.

Jil Raleigh is an engineer and graduate architect at BKK Architects. She is also current co-editor of Inflection, the annual student-run journal from the Melbourne School of Design.

It may seem that such a complex and debilitating condition, experienced within the mind of an individual, may lie wholly within the realm of therapeutic medicine, beyond the remit of architecture. But as is widely acknowledged by architects and health professionals involved in designing for health, the quality and appropriateness of our physical environment has a critical influence on mental and physical wellbeing. In the context of dementia, it is perhaps even more so.

More than merely facilitating appropriate and efficient care, architecture is fundamental to achieving maximum liberty and empowerment of people living with dementia. It was this promise of an architecture of enablement that founded Brian Kidd’s 2015 design thesis studio, “Designing for Dementia,” which formed part of my final-year studies. The studio was the third in a series led by Brian focused on creating innovative and enabling environments for people with dementia. Guided by the 10 Principles of Designing for Dementia1 and supported by a group of dementia and design experts – including architects Kirsty Bennett (University of Wollongong), Allen Kong (Allen Kong Architect) and Alison Withers (Thomson Adsett), and Terri Preece of Alzheimer’s Australia – our class was encouraged to challenge the status quo in aged care and disability design.

The University of Melbourne ARCHITECTURE BUILDING AND PLANNING

MORE THAN MERELY FACILITATING APPROPRIATE AND EFFICIENT CARE, ARCHITECTURE IS FUNDAMENTAL TO ACHIEVING MAXIMUM LIBERTY AND EMPOWERMENT OF PEOPLE LIVING WITH DEMENTIA. IT WAS THIS PROMISE OF AN ARCHITECTURE OF ENABLEMENT THAT FOUNDED BRIAN KIDD’S 2015 DESIGN THESIS STUDIO.

Challenging design conventions has been something of a recurring theme throughout Brian’s career. He began his working life in the early 1960s as a young state government architect in Perth, where his first assignment was the design of a new paraplegic unit at Royal Perth Hospital. During this time, Brian established a close working relationship with orthopaedic surgeon and disability activist Sir George Bedbrook. He gained rare access to the world of disability that was hidden from the general public by the policy of segregation that was a hallmark of the prevailing Victorian model of institutional care.

“Well I got this job, the paraplegic unit, and didn’t know what a paraplegic was. Everybody at that stage was locked up. The blind were locked up in institutions and made baskets – that’s all they were good for; the deaf were locked up in another institution and did gardening – that’s all they were good for; the paraplegics were locked up in another institution – and did nothing much because they couldn’t do much… So we didn’t rub shoulders with them [people with disabilities].” But the principle of normalisation – the concept of enabling people with disabilities to live in circumstances as close as possible to “regular circumstances” championed by German-American psychologist Dr. Wolf Wolfensberger et. al.3 – was to change all that. The disability rights movement had gathered momentum by the early 1960s, spreading initially from the United States and Europe (Scandinavia) to the United Kingdom, Israel, Australia and New Zealand. In Australia, ACROD (the Australian Council for the Rehabilitation of the Disabled4) launched a public awareness campaign, with interdisciplinary committees established in each state and territory to lobby for disability access to public buildings. Brian Kidd was recruited to the cause and led a campaign for equality targeting the architectural profession. “It was a long journey. It was an awareness program at that stage. It was starting from scratch. We started to make little movies, little films, photographing buildings and people trying to get into them and the barriers that steps presented, heavy doors and the fact that you couldn’t find a toilet that you could get into if you were in a wheelchair.”

Decades on, the advocacy work of ACROD and others resulted in key legislation (the Disability Services Act 1986 and the Disability Discrimination Act 1992). In architectural terms, the most significant achievement of the disability rights movement was the massive shift in design culture enshrined in AS1428 (Australian Standard for Design for Access and Mobility). First introduced in 1968 as part of AS CA52.1, subsequent revisions and accompanying legislation have solidified the code’s presence in the building industry. But while he was on the committee for the 1988 revision, Brian remains irked by a fundamental flaw in the code; its exclusion of the aged. “It was a slow process [but] we’ve broken through now, obviously. It’s a common language… As far as I’m concerned, the disability aspect should be covered now. They need a code for older people because the codes we’ve written so far are only tested on people from 18 to 605. So we’ve got a large swag of the population that aren’t covered by any of those codes. So about time we did something about it. And particularly with dementia, if we had some standards, some rules, people would design dementia-specific places better.” This original neglect of the 60+ has, with time, been exacerbated by an aging population and the associated emergence of the dementia “epidemic,” leading Brian to focus his attention in recent decades on improving design standards for aged care and dementia care facilities. During the 1980s and 1990s, he and others worked to develop and implement an evidence-based model of care; smallscale and “residential” in character. This revolutionary new model soon became best practice and substantially superseded large-scale institutional facilities as the dominant form of aged care.

THIS ORIGINAL NEGLECT OF THE 60+ HAS, WITH TIME, BEEN EXACERBATED BY AN AGING POPULATION AND THE ASSOCIATED EMERGENCE OF THE DEMENTIA “EPIDEMIC,” LEADING BRIAN TO FOCUS HIS ATTENTION IN RECENT DECADES ON IMPROVING DESIGN STANDARDS FOR AGED CARE AND DEMENTIA CARE FACILITIES.

“In the 1980s, we had this very big movement, and all we knew was that what had been happening was disastrous… There were lots of studies that were done, in America, particularly, on the negative effects of institutions and the large scale buildings. They were quite destructive on people mentally.” Despite the efforts of these reformers, a recent and worrying trend has emerged that threatens to erode their gains. Since the early 2000s, aged care and dementia care facilities have tended towards a revival of the large-scale institutional model of the Victorian era. And while the number of beds is not a measure of design quality, Brian is concerned that, in the largely corporatised aged care sector, economic efficiency and risk minimisation seem too often to trump a concern for quality of life.

“I think we’ve gone backwards. Years ago we seemed to be doing 30 bed units. Socially, they seemed to be the right in the 80s. Around about 2000, we went to 60. Then by the time I was doing the last ones, which was about 2004, 2005, suddenly they were bumping it up to about 120. It’s all about bean counting. You can see it in their buildings. They [the corporate elite] don’t understand the philosophy properly. They’re in charge at the moment, for sure.” And so, as future custodians of designing for health, our class of proto-architects was tasked with challenging the current emphasis on protection and efficiency, and reviving the concept of dignity of risk. Ranging in focus from conventional building and adaptive reuse to augmented reality, our thesis proposals variously harnessed

Others involved in the development of the normalisation principle include Niels Erik BankMikkelson, Karl Grunewald and Bengt Nirje. (R.J. Flynn and R.A. Lemay, eds., A Quarter-century of normalization and social role valorization: evolution and impact, Ottawa: University of Ottawa, 1999.) 3

the benefits of ecologically sustainable building, the cultivation of a connection with the wider community, and aging in place through assistive technologies. The “Designing for Dementia” studio was a rare opportunity to address a sociomedical phenomenon that affects so many in our communities, and to test these ideas with the support of dementia and design experts who continue to agitate for progress and reform. Now armed with the principles of universal design and an understanding of the challenges of living with dementia, this small group of architecture graduates is now equipped to create an inclusive and enabling architecture; an architecture for our communities as a whole. An Architecture of Enablement

An Architecture of Enablement