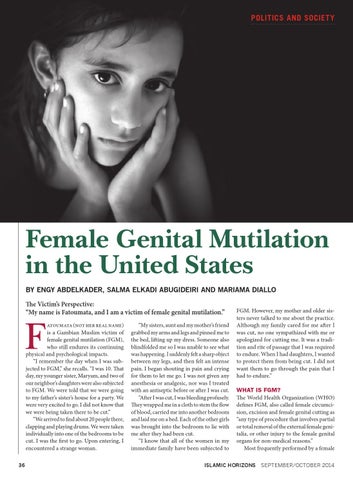 Female Genital Mutilation in the United States BY ENGY ABDELKADER, SALMA ELKADI ABUGIDEIRI AND MARIAMA DIALLO The Victim’s Perspective: “My name is Fatoumata, and I am a victim of female genital mutilation.”

atoumata (not her real name) is a Gambian Muslim victim of female genital mutilation (FGM), who still endures its continuing physical and psychological impacts. “I remember the day when I was subjected to FGM,” she recalls. “I was 10. That day, my younger sister, Maryam, and two of our neighbor’s daughters were also subjected to FGM. We were told that we were going to my father’s sister’s house for a party. We were very excited to go. I did not know that we were being taken there to be cut.” “We arrived to find about 20 people there, clapping and playing drums. We were taken individually into one of the bedrooms to be cut. I was the first to go. Upon entering, I encountered a strange woman.

“My sisters, aunt and my mother’s friend grabbed my arms and legs and pinned me to the bed, lifting up my dress. Someone also blindfolded me so I was unable to see what was happening. I suddenly felt a sharp object between my legs, and then felt an intense pain. I began shouting in pain and crying for them to let me go. I was not given any anesthesia or analgesic, nor was I treated with an antiseptic before or after I was cut. “After I was cut, I was bleeding profusely. They wrapped me in a cloth to stem the flow of blood, carried me into another bedroom and laid me on a bed. Each of the other girls was brought into the bedroom to lie with me after they had been cut. “I know that all of the women in my immediate family have been subjected to

FGM. However, my mother and older sisters never talked to me about the practice. Although my family cared for me after I was cut, no one sympathized with me or apologized for cutting me. It was a tradition and rite of passage that I was required to endure. When I had daughters, I wanted to protect them from being cut. I did not want them to go through the pain that I had to endure.”

WHAT IS FGM? The World Health Organization (WHO) defines FGM, also called female circumcision, excision and female genital cutting as “any type of procedure that involves partial or total removal of the external female genitalia, or other injury to the female genital organs for non-medical reasons.” Most frequently performed by a female 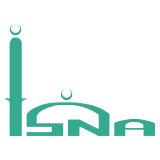